Marshall, Stettinius and Harriman make news as Washington ponders the postwar fate of $500,000,000 worth of bases outside the Western Hemisphere

Marshall, Stettinius and Harriman make news as Washington ponders the postwar fate of $500,000,000 worth of bases outside the Western Hemisphere

DURING the last few weeks the spotlight has been thrown upon several men whom even the American public previously knew only dimly. The foremost of these is General George C. Marshall, Chief of Staff of the United States Army.

Marshall has been the professional head of the Army for almost four and one half years, yet he has been uncertainly recognized by millions who feel that they are intimately acquainted with the accomplishments and characteristics of General MacArthur, General Eisenhower, General Patton, who commanded the Western Task Force which landed in Morocco in Nov. 1942, and later the Seventh Army in Sicily, and General Mark Clark, Commander of the Fifth Army in Italy. Excepting MacArthur, who had already served as Chief of Staff and was recalled to active service only a few months before Pearl Harbor, all of these generals, and many others who may be heard from later, are Marshall’s protégés.

Marshall is the man who built the new American Army and benevolently encouraged the growth of the Army Air Force. When he became Chief of Staff in 1939 there were fewer than 175,000 officers and men in the Army, including about 25.000 in the Air Corps, which was then simply one of many divisions in the Army, on a par with the infantry, the artillery, the engineers and the cavalry. It was an army without modern equipment, on the ground or in the air. Now it numbers more than 7,000;000, including the semi-autonomous Army Air Forces of more than 2,000,000 — unquestionably the best trained and best led army that the United States has ever had and, many believe, the best equipped in the world.

Henry L. Stimson, the distinguished Republican elder statesman, who entered the Roosevelt Cabinet as Secretary of War has brought together a group of top-notch civilian administrators. But Marshall Was already there. He has remained the strongest man in the War Department; the most capable military organizer and administrator within the experience of living observers in Washington and, in the opinion of many, the most brilliant, or most fortunate, single appointment President Roosevelt has ever made.

After Munich the President began casting around for a man who could revitalize the Army, who was both an administrator and a strategist, and whose mind was not bound by 1918 concepts of tactics, especially in relation to the use of airplanes. He chose Marshall, who was then only a brigadier-general and jumped him over the heads of all 20 major-generals and 14 senior brigadier-generals. By the prevailing standards, Marshall, at 58, was a young appointee.

Within a few months the change in atmosphere in the General Staff in Washington was apparent. Marshall brought forward the pick of the younger officers—men in their late thirties and early forties who had received advanced staff and command training at the Army schools. He gave the airmen their due. For the last two years, one half of the officers on the General Staff have come from the Air Forces; the Deputy Chief of Staff is an air general; and the head of the Army Air Forces, General Arnold, sits on the joint (American) and combined (British-American) chiefs of staff, even though in the last analysis he takes his orders from Marshall.

IN PHYSICAL appearance Marshall is not particularly striking. He is a little less than six feet tall, of medium breadth, and rather formless features. His sandy hair has turned grey. But he is quick in his movements—clearly he is always in top-notch condition—and his mind moves with speed and exactitude. He talks and writes fluently but tersely. His official reports, written or dictated by himself, are excellent examples of lean but vivid journalism. He has a sense of humor, and a grasp of the highest levels of strategy where the political and military factors merge. With these qualities he rapidly won the confidence of Mr. Roosevelt and, later, of Mr. Churchill. He has become a warm friend of Sir John Dill, former Chief of the Imperial General Staff.

Junior officers attached to the general staff are continually impressed by Marshall’s courtesy. He has been a favorite of the WACS ever since he invited a WAC sergeant-chauffeur who drove him to an Army benefit to sit in a box with him and the other generals in his party. Various civilians in Washington and New York know him and his wife as connoisseurs of music and charming conversationalists. He has won the confidence of Congress and the top-ranking Washington correspondents to a degree seldom equalled by any individual. So it is not surprising that when the proposal to make him Allied Commander of the major invasions of Europe was made known, Marshall was showered with congratulations by the Press, radio and Congress.

Unfortunately the information leaked out through individuals who did not want him to leave Washington and therefore tried to give the impression that the transfer was “a plot” to supplant him as Chief of Staff by a man more amenable to the British and to the President. This, of course, was diametrically opposed to the facts. The reasons for the proposal were simple and direct. If large invasions by ground troops from the West and South are necessary to defeat Germany, a majority of these forces must come from the United States. Under these circumstances American opinion probably would prefer an American commander and, considering the chances that the casualties will be heavy, the British Government might well consider it desirable that the responsibility for conducting the campaign should rest on an American.

Among the other figures who recently have been moved to the front on the stage of public affairs are Edward R. Stettinius, Jr. the new Undersecretary of State, and W. Averell Harriman, the new Ambassador to Moscow. Both are sons of wealthy men and are successful businessmen in their own right who took appointments in the Roosevelt administration a few years ago.

Stettinius, a handsome, well-built man, distinguished physically by white hair at the age of 43, is the son of a late J. P. Morgan partner who handled Allied financing and purchases in the United States during the first world war. The younger Stettinius enjoyed a phenomenal rise in the business world, becoming Chairman of the Board of the United States Steel Corporation at the age of 38. In 1940 he severed his business connections to take charge of the raw materials end of the American war production program. Later he was shifted to the post of lend-lease administrator, where he has negotiated and administered to the satisfaction of everybody, including Congress.

As Undersecretary of State he succeeds Sumner Welles, whose resignation has not been satisfactorily explained. Stettinius cannot replace the loss of Welles’ intimate knowledge of world affairs and diplomatic skill. However, he is an intelligent man who has now had extensive dealings with the principal United Nations. He has the confidence of both sides of Congress. If he has the power he thinks has been given to him, he will invigorate the State Department with new administrative methods.

Harriman is a tall, slender, slightly stooped man of 51, with quiet but informal and friendly ways. At the age of 17 he inherited some $70,000,000 from his father, E. H. Harriman, fianancier and railroad builder.

Harriman has held several medium-rank jobs under Roosevelt, and for a long time was chairman of a business and advisory council which sought, with not too much success, to obtain a meeting of minds on economic and social policy between middle-of-the-road businessmen and the new dealers. He worked with Stettinius in the raw materials end of the war production program. Just before lend-lease became law in the spring of 1941, the President sent him to Britain as his personal representative, with the rank of minister. The American press spoke of Harriman as “lend-lease expediter.” But his duties, which the British lumped under the name of “The Harriman Mission,” were much broader. He was the American representative on the combined shipping adjustment board and the liaison at the London end between the War Production Board and most other American civilian war agencies and their opposite numbers.

In May, 1941, he flew through the Middle East to make the arrangements for the American supply and repair installations to support the British in that area and went on to Persia to survey what was developed into the southern supply route to Russia.

In Sept. 1941, Harriman went to Moscow with Lord Beaverbrook as joint head of the British-American Supply Mission. He returned to Moscow in Aug. 1942 to represent the President during the Churchill-Stalin conversations. He has attended all the Roosevelt-Churchill meetings, beginning with the Atlantic Conference, and in addition to Churchill, numbers among his close friends in London, Beaverbrook and Lyttleton. In Washington his closest personal friends are Harry Hopkins and Stettinius. So he takes to Moscow intimate knowledge of policies and major trends of thought as to military, diplomatic and international political questions in Washington and London alike, plus an acquaintance with Stalin and other high-ranking Russians.

Several aspects of present and postwar relations bet ween the United States and its Allies have come to the fore as a result of a tour of the war theatres by five members of the Senate. The group was sent around the world, during the two-month summer adjournment of Congress, to investigate war conditions on behalf of Senate committee dealing with the war program and military expenditure.

The Senators found the British, in general, more alert to problems of the postwar period than representatives of their own Government—more skilled in their dealings with the peoples of smaller nations and more aware of what their national interest requires both during the war and after. The Senators were inclined to attribute this, in part, to the fact that Britain traditionally has maintained a stronger and more definite foreign policy, but some of them felt that the British have profited in their dealings with other foreign nations at the expense of the United States.

The Senators also broached the problem of Russian Pacific bases for use by American forces. Access to Russia’s Pacific coastal area, he said, would change the whole character of the war in that theatre. The Senators realize, however, that this proposal raises important military and diplomatic problems for the Soviet Government.

Another fact that impressed the Senator-tourists was that the United States has spent some $500,000,000 on air and other bases outside the western hemisphere, in none of which will it have any rights six months after the war.

Congress is sure to be influenced in its legislating on postwar policy by the firsthand impressions of its representatives on these questions. 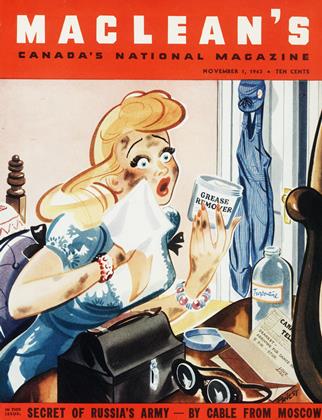