IN THE old days nobody ’round our house ever helped themselves to one apple; they took ’em three or more at a time—one to sink their teeth into right away and another for each pocket. There were no sissy appetites in those times—at least not regarding apples. And whether or not that had anything to do with it, we certainly kept the doctor at his distance.

Not only did we munch apples raw; we baked, stewed, pickled and dried them; put them in pies, made puddings and served them in many other mouth-watering ways—all to the good of our winter menus and the benefit of our health.

Come winter 1943 and there are more reasons than ever for eating these fine old stand-bys. Other fruits are scarce this year. Canned ones are on the ration list and the dessert problem is enough to make housekeepers go grey. There’s more pleasure in eating apples too, for they are crisper, juicier and rosier, thanks to modern methods of production, storage and distribution.

The good cookers you buy now are an inspiration to all good cooks and the dishes you make with them are headliners in any meal. You can serve them often and vary them no end all through their season. And, if you pride yourself on being a good provider, it’s smart to can a few jars of applesauce when apples are plentiful and at their peak of flavor. Serve them later as a tonic for springtime appetites.

Then, too, there will be the added satisfaction of knowing that you are helping the war effort For remem-

ber that every jar of home preserves is one less jar required by the stores.

Y Teaspoonful each of cloves

1 Cupful of raisins or

Cream the shortening and the sugar; add the applesauce and the egg, beaten. Sift and measure the flour and sift again with the baking powder, salt and spices; add the raisins or nuts. Combine thoroughly with the creamed mixture. Pour into a greased loaf or square pan and bake in a moderate oven—350 deg. Fahr.—for 45 to 60 minutes.

Sift together the dry ingredients; add the sugar. Add the combined liquids and mix just enough to blend. Add the apples and distribute them through the batter, mixing as little as possible. Bake in a hot oven—400 deg. Fahr.—for 20 to 25 minutes. If desired, sprinkle the tops of the muffins with cinnamon and brown sugar before baking.

2 Cupfuls of applesauce, slightly sweetened x/i Teaspoonful each of cinnamon and nutmeg

Cut the bread in thin slices and trim off the crusts. Butter lightly. Dissolve the gelatine in the boiling water and combine with the salt and the applesauce. Pour a thin layer of the warm apple mixture in the bottom of a loaf pan, then a layer of bread slices. Sprinkle lightly with the spices. Continue with alternate layers of bread and apple mixture. Let stand until cool, then chill in the refrigerator for four hours or longer. Turn out and cut in slices. Serve with whipped evaporated milk or thin cream.

Boil the sausages for five minutes and drain well. Place the sausages in the bottom of a casserole. Add the apples, filled with brown sugar, and pour the tomatoes over the top. Cook in a moderate oven—350 deg. Fahr.— until the apples are tender. Six servings.

2 Tablespoonfuls of butter or mild dripping

Pare, core and cut the apples in slices. Arrange alternate layers of apples, cheese and crumbs in a greased baking dish, with crumbs on top. Add the water. Bake in a moderate oven —350 deg. Fahr.—for 45 minutes or until the apples are tender.

To Identify Aircraft Civilians can join in one of the soldier’s favorite pastimes—identifying combat aircraft—with playing cards that have silhouettes of Allied and enemy planes on their faces. The United States planes are spades, British are hearts, German are diamonds and Japanese are clubs. In the corners are the “pip” signs. The airplane card idea was suggested by officers of the Third Air Corps, Tampa, Fla., who have been conducting classes in aircraft identification. — Popular Mechanics. 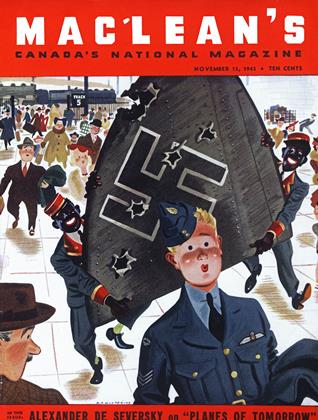