The following is based on a series of interviews in New York with seven leading U.S. industrialists whose co7npanies’ production is greater than the total production of all industry, farms and fisheries in Canada.

THE WAR has given private enterprise what may be its last chance to prove itself.

If private enterprise fails when the crisis comes—and that will be after the war—it will be replaced.

Replaced by what? Nobody knows. Bureaucracy, governmental control and ownership, confusion and chaos seem likely answers.

Realization that this crisis lies ahead is driving the leading businesses of the United States into a brand-new field of economics— postwar planning.

So important do these corporations regard the field of postwar planning that some of them are assigning vice-presidents and other officials to research on this task as a full-time job.

The researchers are faced with stupendous problems. They must get business away from its too individualistic past. They must prepare to assume leadership and co-ordination of effort on major questions. They must see to it that private enterprise has a broader conception of its duties to the community.

They know that they cannot dream of returningtothe30or40per cent production which pertained in the 1930s. To do so would mean the destruction of private enterprise and whatever political party is in power.

They will be faced with a postwar demand for full-time production. They will have millions of young men and women trained along industrial lines, who must be put to work.

Their postwar production itself will be full of problems—replacement of dies and tools; use of new materials; re-establishment of dislocated distribution systems.

INDUSTRIALLY, the automotive business has long been America’s business leader. What is its view of the postwar picture?

A high executive of one of the world’s largest automotive corporations said:

“Wehavea planning group which is attempting to deal with postwar problems in an extensive way. It operates on a decentralized basis and the various problems are passed on to keymen in our various branches to work out.

Although the world is waiting for a revolutionary “postwar car,” this corporation will have nothing designed and ready for production the moment peace comes.

“Our technicians,” says the head of the company, “have a full-time job now, and it will take two years to work out a new model after the war.”

Research done so far indicates that the postwar engine will be lighter, more powerful, use 100 octane aviation gas. Chassis will be lighter, redesigned. We will have 10 to 20 times the amount of aluminum and 30 to 35 times the present amount of magnesium available for general use.

When the postwar car does come out, the volume of its production will be determined by the public’s purchasing power. One company’s postwar research department indicates that if buying power is maintained at $100-$110 billions, there will be an increase of 35 to 40 per cent in car production.

According to one executive, the steam locomotive is doomed as uneconomical and its place will be taken by the Diesel engine. Indications are that more and more the railroads will be powered by some form of the internal combustion engine.

In the postwar era, says another executive, travel by air will increase heavily and railway Pullman traffic will suffer. Express will go increasingly by air, but freight will not be affected greatly, because it will be more economical to move it by rail.

Of ocean transport, one executive has this to say: “Ocean transport as we knew it before the war is a thing of the past. Airplanes will supplant it. Freight, of course, will still go by ships, but they will be a different type, more moderate in size and cheaper to operate.”

THE RAILWAYS of the United States, which are hit very hard when times turn hard, are also working on the postwar problem. One major line has a Postwar Research Council headed up by a vice-president. The council is broken into subcommittees, each headed by a man specially qualified to deal with his committee’s subject. Right now the passenger service committee is designing a postwar pattern of the highest type of service at the lowest cost; the freight service committee is going into the question of truck co-ordination, and others are laying solid foundations for personnel, airways, merchandise, mail and express problems.

Although there will always be a market for food, a leading United States food-processing company is busy on postwar research. It has set up a research department which at the present time is studying a total of 89 projects which may lead to new postwar products.

ACCORDING to the head of a large inter¿X. nationally known manufacturing company, the postwar period will see a different attitude

toward business adopted by the people in power in the United States Government. He is optimistic on the postwar future, more optimistic than he has been for ten years.

He believes employers are becoming more enlightened and there is a greater chance of employees and employers coming together to work out solutions to the tremendous problems which will present themselves. 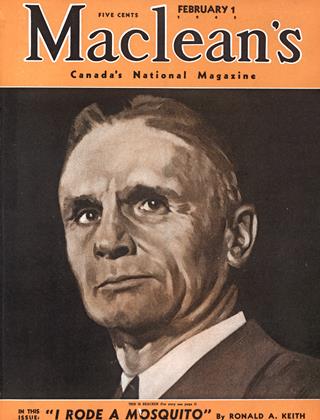