WHAT is a rollerbug? A rollerbug is a person of either sex who dances on wheels.

You won’t find the definition in your dictionary because it’s a relatively new word in the language. And where does a rollerbug dance on wheels? Why, in a rollerdrome, of course! Every night you’ll find ten thousand of them cavorting in rolierdromes scattered about the land from Victoria to Halifax.

What is a rollerdrome? It’s an overgrown skating rink with a wooden floor. When you go into one as I did the other night, the first thing that registers is a kaleidoscopic blurr of sound, motion and color.

You hear the muted whirring of hundreds of fibre and wooden wheels as the dancers glide and swirl in perfect rhythm to the strains of Strauss waltzes, marches, rumbas and the latest swing music.

You see a revolving human spectrum as the red, orange, green and pastel shades of the girls’ costumes merge with the darker costumes of their partners—many are in the dark blue of the Navy, the light blue of the Air Force, the khaki of the Army, for the services have gone for roller dancing in a big way.

You find the conviviality of an old-time barn dance; the charm and grace of ballroom dancing; together with the speed and skill of figure skating. Roller dancing is a superb medium for the expression of youthful vitality and joy of living, as boys, with that air of confidence which comes from perfect balance, poise, and muscular co-ordination, dance with sparkling-eyed girls.

Along with the youngsters you see plenty of middle-aged couples waltzing together, and a few sporting folk, old enough to be grandmas and grandpas, who skate arm in arm round the outside of the floor.

Roller skating is no new fad just hitting the country! Originally it was an outgrowth of ice skating dating back as far as the eighteenth century. About twenty years ago, however, its popularity reached a low ebb as skaters grew tired of just going round and round the arena like ring around the rosy. More adventuresome and daring sports took its place. But its rejuvenation began eight years ago, following closely on the heels of figure skating on ice, which was being popularized all over the country by carnivals and movies. In 1935 Jimmy Lidstone, British roller skating champion, came to the United States to give exhibitions of skate dancing on wheels. It caught the public fancy and spread like wildfire through the United States and Canada. The term “rollerbug” came to be used to describe the fast-growing army of roller skating fans.

WITH the great increase of rollerbugs came the modern efficiently run rolierdromes. Buildings were constructed especially for the purpose of roller skating, with large well-ventilated arenas, comfortable dressing rooms and lounges, with soft drink stands to serve as a picker-upper for weary rollerbugs. The floors of these arenas are laid circularly so you skate with the grain of the wood and avoid that washboard sensation of skating over cracks. A really good floor is made of maple, laid over a six-inch base of concrete, four inches of cork and a two-inch layer of asphalt. This insulation deadens the whirring and the clacking of hundreds of wheels. The air is kept

pure and fresh by means of huge fans continually blowing in fresh gusts of ozone.

There are rollerdromes in the large cities in Canada and in many of the smaller ones. They are run for the most part as business enterprises, with the exceptions of Owen Sound and Galt, where the arenas are operated and owned by the city. The western provinces and Ontario lead the parade in rollerbug enthusiasm. Vancouver has six rinks, Winnipeg has two and Toronto two. The city of Galt, with its population of only 15,000, has the largest number of rollerbugs per capita in Canada. Roller skating is an all-year-round sport everywhere except Galt, Owen Sound and Saskatoon, where the arenas are used for roller skating in summer and ice skating in winter. Halifax has recently opened a roller skating rink, in answer to the insistent demands from the lads in uniform. In fact roller skating is so popular with the armed forces that there’s talk of installing portable rinks in military camps.

Annual carnivals have done wonders in selling skate dancing to the public. This year Winnipeg will hold its seventh carnival, Vancouver its second, and Toronto its fourth. They are patterned exactly on ice skating carnivals, with colorful fancy costumes, group routines, ballets, adagio and solo numbers.

It takes months of planning and hard practice to produce one of these carnivals, but rollerbugs love their work. As one manager described it: “There’s nothing quite so enthusiastic as an enthusiastic rollerbug!” They get together and form clubs to learn their figure and skate dancing. Each member pays one dollar which goes to club funds, and twenty-five cents per lesson to an instructor or instructress—they’re nearly all girls these days. Rollerdromes have six or seven pros on hand to coach club members and beginners.

If you are a beginner there’s a special rink for you to take your first wobbling steps under the guidance of an instructress, until you feel confident enough to try your wheels on the main arena. This may take you from half an hour to a week, depending on your own natural sense of balance. Because, unlike ice skating where the skater has sharp blades to control his movements, roller skating is movement on wheels, and the

rollerbug must depend upon 'balance and poise.

Once you’ve progressed to the main rink, you’ll go round and round the outside of the floor until you feel the urge to try that thing called dancing-on-wheels, which you see being performed by skaters in a specially marked-off oval in the centre of the rink. This is the time you’ll join a club for practice and coaching, and your career as a rollerbug really begins.

AT THE present time there are - two schools of thought on the subject of skate dancing. The first school recommends figure skating as a basis for dancing. They believe the more proficient you are at figure skating, the better you’ll dance. The other school argues that figure and dance skating should be kept separate. They contend that plain skating gives an equal, if not better, foundation for dancing. This second school also believes the steps and sequence of steps in dance skating should be practiced as dance figures, and not to a centre on a circle as is done in figure skating.

However there are six fundamental figures you must know before you become a skate dancer. You must know backward and forward inside edges, backward and forward outside edges; “Threes,” which is a turn on one foot from an outside forward to an inside backward, or an inside forward to an outside backward; and “Mohawks,” which is a stroke from a forward edge to a similar backward edge.

Rollerbugs skate many dances. There are at least ten different types of waltz. There is the tango—smooth action, slow tempo, and danced to rumba rhythm, with intricate crossed and chassé steps. It is danced partly in closed or waltz position, and partly in open position. Open position means you and your partner turn and face in the same direction as you skate. The Foxtrot has the same rhythm as the tango, but steps are done to a faster tempo. The Collegiate is jitterbug stuff, done in open position as you skate down the length of the rink and closed position on the turns.

twelve miles an hour, you wonder how they avoid colossal upsets and pile-ups. But safety rules are rigidly enforced by uniformed guards called “cruisers” who skate backward round the rink to prevent dangerous speeding, sudden slow-ups, zigzagging and weaving. They’re on the spot to rescue the fallen, pick them up, dust them off and start them all over again.

Rules for behavior are equally strict in rollerdromes. There’s a man at the entrance gate who watches with hawklike eye for any gay young bloods who have been pub-crawling and look slightly the worse for wear. They’re politely but firmly turned away. Hip-flask carriers are frowned on and receive equally drastic treatment. The girls at the rink say they can spy a “wolf” at forty paces, and they just haven’t time to bother with phonies of this type.

Rollerdromes seem to be one of the last stands where you’ll meet the feminine type girl. Slacks, beach pyjamas, and shorts are taboo on the rink. “I’ve never seen a girl yet who looked as well in pants as she does in a skirt . . . exceptMarleneDietrich,” one manager observed. The favorite costume for a girl consists of short pleated skirt, which swirls out as she dances, and a bright-colored blouse or sweater.

A man must not skate around in his vest, minus his coat, and never must he offend the public eye by appearing in his braces. Even loudcolored shirts are eyed with disfavor. In other words, rollerbugs make a graceful and picturesque sight as they swoop and glide around to music, and it’s a shame to mar the scene with sloppy or unbecoming clothes.

THERE’S a great deal of delicate mechanism in the construction of modern precision wheel skates. The wheels are made of hard wood or fibre and the direction in which the wheels turn is controlled by the weight of the skater as he leans from one side to the other. Metal skates are banned from rollerdromes. They are used nowadays only by youngsters tearing up and down sidewalks.

When you become a rollerbug, however, you don’t have to buy a lot of expensive equipment. Although a large number of skaters do own their own skate-boots it’s not essential. You can get perfectly adequate skates at the rollerdrome, and they’re included in the price of admission.

Right now, rollerdromes in Canada are running to full capacity, afternoons and evenings. If it weren’t for the war, and the impossibility of getting supplies, new ones would be springing up all over the country. But the manufacture of roller skates has been stopped for the duration. They’re getting scarce, and it’s difficult to find even a single pair in the stores. But fortunately for future rollerbugs, the rinks are well stocked. One rollerdrome has 2,500 skates on hand, while others have from 1,000 to 1,500. Each time skates are used and returned, they are checked over carefully by repair men, so the next

skater who gets them won’t land on the flat of his or her back because of faulty mechanism.

And here’s a private word to girls. Skate-dancing is an excellent means of developing poise, a slender graceful body and well-shaped legs.

To quote Perry Rawson, one of the world’s leading skating authorities, on the subject of dancing-onwheels, “A new and thrilling dance art is being born.”

You don’t have to be a crystalgazer to predict a big boom coming up for roller dancing after the war. 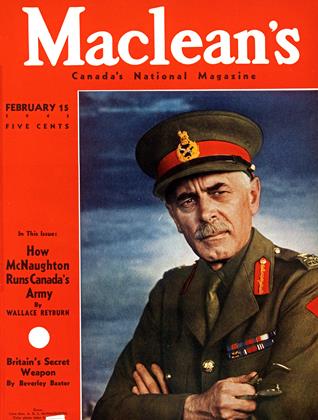