THE TORIES are experiencing a revival in Britain. Their long night is ending. That is the information which I send to you in Canada for your consideration and comment.

The last cheers which the Tories heard for themselves was when Mr. Chamberlain returned from Munich to a grateful and much relieved nation. Not only did the British cheer, but the Canadians and Americans as well. Mr. Chamberlain was the idol of the hour and, since he was the Tory leader, the sun shone on the Conservatives as well.

From that time on there were no more cheers. The fateful year of 1939 opened with its final humiliations merging into war. The accusing finger turned toward the Tories. They had been t he villains of the peace! They were the bunglers of the war. Norway was the climax. Chamberlain was hurled from office and Churchill, the rebel, took command.

True, Churchill was a Conservative but the accusers differentiated clearly between him and the others. He had no responsibility for Munich or for the nation’s unpreparedness. It was the rest of the party who were marked for the guillotine.

It turned out to be a very one-sided affair. The Tories observed the truce with a completeness which brought stagnation to their local organizations. The Socialists honored it more in the breach than in the observance. In speeches and “talks” and articles they did not praise themselves. They merely denounced the Tories as the authors of all our evils.

The Liberals were less emphatic. As heirs to a fading dynasty they contented themselves by saying that while everyone was partially to blame it was certainly the Tories who were the most guilty.

The Communists, who had never agreed to a party truce, set no limits upon their exuberance. They raked the Tories fore and aft, declaring that it was a capitalist war (until Russia came in) and that the Conservatives of Britain would be swept into the discard for fifty years as soon as the electors could get at them.

The Tories made no attempt to fight back. They looked and moved like guilty men out on suspended sentence. Even those with what are called “safe” seats began to wonder what would happen to them if a general election took place.

Every now and then there was a contest in the constituencies despite the party truce. Independent candidates would appear and a number of them were successful. In each case the Independent victory was at the expense of a Tory, never of the others.

And all the time, in the public houses, in the barracks, in the lecture societies, in the factories, the campaign of attrition went on without a stop and without an answer. What was the case against the Tories? It was fourfold:

(2) They refused, as the dominant section of the Government, to go to war with Japan, General Franco and Mussolini. The only war in which they were excused was the one between Bolivia and Paraguay.

(3) They refused to fight Hitler over Czechoslovakia.

(4) They represent the old order.

The logical mind might ask why, if a Government is unprepared, it commits a further crime in not going to war—but then logic does not enter largely into political discussions.

I^OR FOUR years the anti-Tories had it all their own way. But something has happened recently or is beginning to happen. The Tories, who are always guided more by instinct than reason, are not going into the trees for another winter’s sleep. They are on the prowl and will soon be on the march.

Why is there a tingling of new life in the Tory’s veins while the Socialists are beginning to experience once more that familiar sinking feeling?

Oddly enough both America and Russia figure in the answer. These two republics, allies in war but vastly different in pyschology, will have a profound influence on the future development of the whole world. Whatever they do or think will register on the seismograph of human destiny everywhere. Because of the traditional link of race and language the influence of America on Britain will be the more direct and therefore the more effective.

From this side of the Atlantic we believe that America is moving, politically, to the Right. That is the lesson we read in the recent 1942 elections when, despite Mr. Roosevelt’s popularity as a wartime leader, the day went to the Republicans who are the Conservatives of American politics.

Why did the vote go that way? We believe over here that it was the restless spirit of a highly individualistic people moving away from the benevolent tentacles of the New Deal. Security never means much to an American for long. What he wants is unhampered opportunity with unlimited reward.

It might be argued that the Americans distrust the Tories. Munich, appeasement, the Cliveden Set, Manchuria and the rest left a deep impression upon the sensitiveness of the American soul. Nevertheless the U.S.A. prefer the British Tories politically and economically no matter how they may distrust them spiritually. The dollar feels more friendly toward the pound when a Tory Chancellor is at the Exchequer.

SUPPOSING THEN our opponents concede us America. Supposing they agree that America and Britain are likely to move along the same political road—have they not a mighty retort in Russia? Are the Socialists not within their rights in claiming that the glorious victories of the Soviet Armies must prelude a new era in which the

parties of the Left will come into their own?

This is a somewhat delicate matter but does anyone suppose that there is a special affinity between the Kremlin and Transport House, which is the headquarters of the British trade union movement? Can Mr. Bevin, as head of the T.U.C.and therefore boss of the Socialists, really proclaim a special brotherhood with Stalin who did away with Trade Unions long ago?

Thus, as the Tories look upon the outside world they feel the warming winds of willing co-operation from Russia and America alike. In short, the Conservative Party is reaping those benefits which come to an institution of long-established credit even if it is known to be somewhat lacking in enterprise.

Supposing then that opponents of the Conservative party concede it both America and Russia as favorable external factors. Can they not claim with justification that elections are really resolved on the home front?

Even if that be so I do not think the Socialists have much cause for optimism. They are suffering from a process of attrition which is sapping alike their strength and their vital ity. The Communists from without and the half-Communists from within give them no rest.

Perhaps this needs a word of explanation since one country’s politics are another country’s crossword puzzle.

The Communist Party in Britain has oneM.P., one daily newspaper and two or three able leaders. They despise the Tories but they hate the Socialists since Pink clashes with Red

while Blue does not. The Communists are an unscrupulous lot, working to an established technique of the wildest charges against their opponents and a passionate loyalty to a Soviet remade world. They have stolen the slogans and the fire that the Socialists used thirty years ago. They snipe at the poor Socialists by day and by night and then periodically say: “Why do we fight? Since we both represent the workers, why should we quarrel to make a Capitalist’s holiday? Admit us into your ranks and we shall obey your rules.”

But the Socialists are like little Red Riding Hood and note what big teeth the strange animal has that comes in sheep’s clothing. They say the animal is bad enough in the forest outside. They don’t want it in bed with them.

Thé neo-Communists within the Socialist ranks are of course an advance guard of the pack outside.

Argumentative Aneurin Bevan and loud-voiced, rich, Richard Stokes are I the two unofficial leaders of a curious little crowd. The spectacle of Socialist leaders in the Commons | turning round and pleading for i loyalty from their insubordinates j has become a Westminster commonplace.

UNFORTUNATELY the Socialists have never been able to renew the leadership of early days, j The party is ripe, overripe in exj perience, but it has not retained that fecundity which gave to the British political scene such men as Ramsay ¡ MacDonald, Philip Snowden, Arthur j Henderson, Sydney Webb, J. H. I Thomas and the others. The flash ¡ of daring and inspired leadership j is gone.

And there is one other serious j factor working against them — a factor which you in Canada will now be able to understand from firsthand experience. As long as the ¡

country had never experienced it the Socialists were able to picture a human paradise under state control. Unfortunately the people are having such a surfeit of it in the war that their stomachs turn ut the very thought of it as a perpetual diet.

As someone once remarked to me in North Bay, Ontario: “Many a good mine has been ruined by sinking , a shaft, and many a good hair restorer ruined by applying it to the scalp.” Alas for Socialism! State control has been tried out.

If all this be true then have the Tories only to wait until the tide comes in?

There is always a section of the Conservative Party in any country which believes in doing nothing at all times but this section never represents the Party as a whole. Certainly the rank and file of British Tories will not be content with merely gaining by their opponents’ decline. Nor will they agree that final victory should wipe out the charges of unpreparedness for war. Victory is a bountiful jade but the conscience of the Tory Party is awake and does not want the fortunate culmination of events to excuse the errors and misjudgments of the past.

country, will demand that the Party take heed of the dreams and necessities of youth. Peace must be made a greater adventure than war.

The new Tory democracy cannot merely be a further edition of the old. If it is to become a vital living thing it willhave to move in closer sympa thy with the postwar world.

I have tried to draw you an accurate picture of the changing political scene over here. Events may alter the course of the tide but it would seem stark clear that a Tory revival is at hand.

Even Munich, that word of dire and sinister repute, is taking on a different meaning. People are beginning to say that Chamberlain saved the world by enduring the terrible humiliation of Munich in order to gain time. Some of the Tories are beginning to boast: “I am a man of Munich,” much the same as the ancient Romans declared: “Civis Romanus sum.”

If I am correct, will the move of America and Britain toward the Right take in Canada? Will there be a Conservative revival in the Dominion too?

Actually I do not know, and since every letter must come to an end I suggest that this is a good place for it. 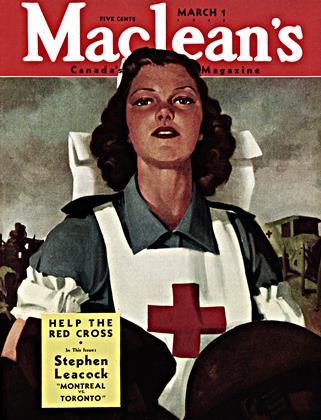