§ Premier Hart in fighting mood § Alberta’s creditors in the dark

THE British Columbia Government has been incubating the largest program of reform ever attempted in this part of the world. This is a political situation worth the nation’s attention for it shows what happens when a Government devoted to private initiative and formed by both Liberal and Conservative Parties is opposed by a Socialist opposition. The Government gets busy and moves gently to the Left and tries to cut the ground from under its opponents. This, Premier John Hart is busily doing at the moment.

Mr. Hart’s budget of news came as a complete surprise. The big item was a hydro program. He has made an approach to public ownership of the B.C. Electric Railway Company (B.C. Power) by offering to co-operate with Vancouver and Victoria should they want to acquire transit services in the two cities, and the right to distribute electricity. But he suggests the cities of Victoria, Vancouver and their neighbors take over the business of retailing electricity and running streetcars. If the cities are in favor the program will go forward. The public is led to hope that electrical rates will decline, as they have in other areas of public ownership.

Mr. Hart also proposes a huge road program to cost $15,000,000 and to be started immediately after the war. He is going to overhaul the provincial workman’s compensation law, for the benefit of Labor. He is asking for amendments to other labor laws to strengthen the rights of workers in collective bargaining. He is improving the lot of rural schoolteachers, now scandalously underpaid. And he is still reporting a large revenue surplus despite the loss of liquor revenues.

Also, the Hart coalition Government, is beginning to fight. Provincial Government employees are busy organizing an association which has all the earmarks of a union and Mr. Hart sees the work of the C.C.F. in it. He has warned the Legislature that any civil servant found playing politics (C.C.F. brand or otherwise) will be instantly fired. For the first time since he entered politics in 1916, Mr. Hart seems to be getting mad. The people of B.C. find the sight enlivening.

TIME and the Privy Council have caught up with Alberta’s Social Credit Government. A series of debt adjustment and debt protection acts, which date as far back as 1937, have been declared ultra vires by the Privy Council and now thousands of debtors, creditors, mortgage and loan companies and banks are trying to find out just where they stand.

One of the first acts of the Social Credit Legislature elected in 1935 was to pass a law which cancelled all private debts contracted prior to July 1, 1936, except those owing to the Federal and Provincial Governments.

Thousands of farmers and house purchasers just stopped paying their debts. Many just couldn’t pay, but there were lots who could that didn’t.

This went on for years. One by one the acts were attacked in court. The Alberta Supreme Court declared them ultra vires. The Supreme Court of Canada threw them out and now along comes the Privy Council—the highest court of all—and does likewise.

After the feast comes the reckoning. Those who didn’t pay their debts saw the unpaid interest pyramid year by year.

In a number of cases, the amount of debt now exceeds the value of the mortgaged property.

While the debt protection legislation was in effect the Legislature also passed an act denying creditors access to the courts. They couldn’t sue and they couldn’t collect and many were forced to sit by and watch their claims become automatically outlawed by the provisions of the Statute of Limitations.

The decision of the Privy Council came within

a few weeks of the opening of the second session of the ninth Legislature (February 18) and now everyone, creditor, debtor, loan company, banker, lawyer and Joe Doakes and his wife are trying to find out what happens next.

UNITS of the Canadian Army, active, stationed at Dundurn training camp in northern Saskatchewan, are preparing to stage a blitz this spring on the Anapholene and Culicina clans— known commonly as mosquitoes.

Last year the mosquitoes did an excellent job of fifth columning when they disrupted outdoor training. Dundurn was a particularly bad pest nest and soldiers in training with their short pants and shirt sleeves made excellent targets for the swarms of mosquitoes.

So bad was the situation that the story was told about an Army mechanic at Dundurn who “gassed up” what he thought was a Universal carrier before he realized it was just a mosquito taking shelter from the rain.

to overcoming the invasion of the buzzing biters.

“We’ll show no mercy this year,” said Capt. A. Roy and Capt. F. O. R. Garner, district hygiene officers, who will have prominent places in the anti-mosquito campaign. Dundurn military camp will get special attention as it is recognized as the most heavily infested camp in the province. All sloughs and low spots where the mosquitoes breed will be covered with old salvaged oil.

renting additional land until after victory. Several meetings have been held at Portage la Prairie under the auspices of the local of the Manitoba Federation of Agriculture—and with loud explosions.

The complaints are levelled at all conscientious objectors but most of the criticism missed the Mennonites, many of whom are serving with the armed forces. The Hutterites have been the main target of the criticism.

It is claimed that much good land was being picked up by the members of the latter sect, including parcels which normally would be operated by men now in the services.

Mass opinion was represented by such claims as:

statutes which permit exemption from military service of conscientious objectors be repealed.”

Other demands in the offing are: “That the soldier board inspect and buy all suitable land offered for sale and hold this land until the men return from overseas. That a competent board be set up to consider all cases of sale.”

THE betting around Queen’s Park is that there will be a provincial election this year. Both Government and Opposition are mum on the subject, but veteran observers point to the fiery outburst of ex-Premier Hepburn against the Ottawa Government, the coming Provincial Liberal Party convention, the throwing of Hon. Harry Nixon’s hat into the leadership ring and the aggressiveness of the Progressive Conservatives in the House as signs that an appeal to the ballot box is shaping.

UNDERTAKEN as a postwar program to provide work for returning soldiers and workers of defunct war industries, the Provincial Government has announced an extensive colonization program involving an expenditure of $10,000,000 over a period of years with the probable co-operation of the Federal authorities. The colonization plan, Premier God bout points out, is to be a complete departure from previous ones, some of which have been abortive. In the new program settlers will not be sent into uncleared areas without facilities enjoyed by farmers in other sections. Roads will be constructed, he claims, churches and schools will be built, together with adequate housing for the settlers. And before the settlers arrive, from five to ten acres on their lots will have been cleared.

It is hoped the program will provide employment for at least 25,000 men, many of whom may be induced to stay on the land they will have opened to colonization.

EARLY in December, the Saint John Common Council was requested by several local social service organizations to adopt a curfew law for children. The law was duly drafted and copies of it were sent to all of the societies interested.

The Council waited for two months without receiving a reply from any of the organizations. In fact the only reaction reported was that of the officials of various church young people’s groups, who protested that their members would have to leave in the middle of meetings in order to get home on time (a deadline nine p.m. was set for the winter months, ten p.m. for the summer).

The council decided to take definite action on the question, called a public meeting, and the result was the adoption of the curfew law on a three-months trial basis.

As it was finally adopted, the law now affects only children under fourteen years of age, and the deadlines were changed from nine p.m. and ten p.m. to nine-thirty p.m. and tenthirty p.m., respectively. A stroke of the fire bell and a blow of the fire horn fifteen minutes before these zero hours will signify that it is time for these youngsters to be on their way home.

New Brunswick has just built its first wooden minesweeper, a 100-foot craft, broad in beam, light in draft with a square stern, one of a series which will be constructed for one duty only—minesweeping. The yards where the first of these was turned out are managed by William Vaughan who, many decades ago, worked with his father in the Maritime shipyards which turned out sailing craft known throughout the seven seas for their stability and endurance.

SOME Haligonians are complaining that Halifax is not getting as much to eat as the rest of the country.

Chocolate bars and bananas are two items in point. A banana is so rare in Halifax that when one recently arrived from Toronto (where bananas are also rare) it was photographed and the picture published in one of the city’s newspapers. Haligonians now call Montreal, Toronto, Winnipeg, and other inland cities “lands of plenty.” When a commercial traveller returned to Halifax recently from a trip to Montreal he was interviewed on the food situation and the papers carried glowing and mouth-watering accounts of the choice and abundance of food which he discovered in “Canada.” Nostalgic odes were inspired by the traveller’s stories and given the same prominence as the actual interview.

CANADA’S ISLAND PROVINCE digging itself out of the same tough winter which has blanketed the entire country—is looking to spring and summer with anything but pleasure. The trouble is labor shortage.

The Minister of Agriculture, Hon. W. H. Dennis, has taken a definite step toward relieving the situation. He has written Prime Minister Mackenzie King asking for Italian prisoners of war to be put to work in P.E.I. farms during the coming season. Mr. Dennis has received a reply from Labor Minister Humphrey Mitchell, saying that. his request would be given every consideration. Mr. Dennis explains that he specified Italian prisoners because “they would not likely be inclined to want to run away or escape.” He argues that any escape ambitions would be dampened by the fact that they were on an island—and not too large a one —and that Italians were not so keen on the war that they would make trouble.

One favorable factor in the Island’s agricultural situation is a recently acquired supply of potash—a much needed ingredient of fertilizer. The potash miraculously poured into the province from—of all places—Russia. Once more the U-boats had been outguessed and the Merchant Navy had delivered the goods—which will be used to grow still more food for the war effort. 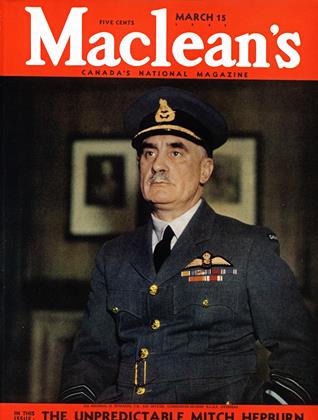