THE LUMBERJACK who harvests British Columbia’s giant trees has to have the skill of a mechanic and the physical condition of an athlete. These days there aren’t many men like that outside the armed forces. That’s why B.C. lumber operators are gloomy about prospects and say Canadian timber output, five billion feet in 1941, may drop below four billion this year.

They add that if this happens there won’t be enough timber to meet Britain’s war requirements or Canada’s, not enough to supply what is needed by the railways, not enough to build barracks for the Army, hangars for the Air Force, docks and ships for the Navy. The operators claim that three thousand keymen are needed at once, have asked

Ottawa to release these men from the Army.

Ottawa has decided to move thousands of Japanese to the beet sugar fields of the Prairies and Ontario—and the people of British Columbia can hardly wait to see the last of them. British Columbians have a deeprooted determination that the Japs shall never return to the coast, and certainly that they shall never be permitted to concentrate again in the Vancouver area. The fact that the Dominion Government is selling off all Japanese property in British Columbia is taken as a sign that it favors the provincial viewpoint, plans to back it up.

Liquor used to figure in the political news because there was too much of it. Now the trouble is the scarcity. Liquor Commissioner W. F. Kennedy is threatening a system of coupon rationing for liquor if he is not allowed to secure larger supplies. On the basis of his existing and prospective stocks, Mr. Kennedy says the consumer can expect only twenty-six ounces of spirits every two or three months. This news hit the drinking fraternity like a block-buster and produced lamentations which must have been heard east of the Rockies.

Beyond all this excitement, and not much noticed, the Hart Coalition Government has been systematically building its fences and effecting a permanent realignment of parties. The utterances of Liberal and Conservative members of the administration show clearly that they now regard themselves as married for good, or at least for a long time. The Government is not acting as a

temporary stopgap but as an enduring union to oppose the powerful C.C.F. The C.C.F., for its part, is working on the assumption that it must beat the combined Liberal and Conservative votes in the next election.

ALBERTA IS having a spring harvest. Winter arrived six weeks ahead of schedule last year. Because of this—and the labor shortage—stooks of wheat, oats and barley in thousands of Alberta fields were snowed under. As the snow left farmers took up the harvest where they left off last fall. The grain, especially wheat, will grade low, but they hoped to salvage something.

The farm labor situation, critical in Alberta last year, is more so today. Farm wages are three times as high as during the depression and even at that few men are available.

For ten whole days and nights the caribou passed, ( trampling a hard wide path across the snow. There were tens, hundreds of thousands in the herd. Sometimes the procession was a hundred yards wide, sometimes half a mile.

This wasn’t fifty years ago—wasn’t a memory recalled by an old man as he warmed his bones before a fire. The gigantic herd was seen a few

weeks ago when the meat shortage was spreading through the land and butchers’ shelves were bare. It was seen by two young men who go winter fishing at Reindeer Lake, two hundred miles north of Flin Flon. They told their father, Skuli Sigfusson, a member of the Manitoba Legislature. And Skuli Sigfusson told the Legislature. His suggestion: That hunters be sent north to shoot caribou and end the meat shortage.

"Caribou roast,” he added, "is a palatable dish .. .somewhat between beef and mutton.”

Dr. J. C. Pincock, superintendent of schools for Winnipeg, thought some of the pupils looked tired, decided to ascertain why. He found that more than three thousand boys and girls work after school,

many under conditions he described as “medieval.”

Examples: A ten-year-old boy works in a grocery store thirty-six hours a week and receives drinks and chocolate bars for pay. A pin-setter in a bowling alley works forty-five hours a week, on top of the twentyseven and a half hours he puts in at school. A teen-aged girl does housework fifty-four and a half hours a week—after school. One girl earns two dollars a week for minding a baby five hours on school days, ten hours on Saturday and twelve on Sunday.

Dr. Pincock’s conclusions: “Unregulated employment of young people out of school hours has resulted in abuses which will certainly undermine the health and retard the education of many of our children.”

TORONTO’S HOSPITAL for Sick Children, one of the most famous institutions of the kind on the continent, has been trying out germicidal lamps. These throw a special ultraviolet ray—shorter than the shortest ultra-violet ray in summer sunshine —which kills or inactivates certain kinds of bacteria and minimizes the danger of air-borne infection. So successful have been results at the Hospital for Sick Children that the Royal Canadian Air Force believes the lamps may offer an effective means of reducing illness in its training establishments, has installed forty of them in the Initial Training School at Oshawa. A careful record is being kept of the health of personnel stationed there. If the experiment is satisfactory, other schools will also get germ-killing lamps.

All the unearthing of historic treasures isn’t done in foreign countries. There’s a bit of it going on right here in Canada, on the east shore of the Wye River, near the Ontario town of Midland. There,

under the direction of K. E. Kidd, keeper of ethnological collections at the Royal Ontario Museum, half a dozen hand-picked workmen are digging Fort Ste. Marie out of three centuries of silt. Last fall they uncovered the towers of the old fort, built in 1639, and then cleared around the stone walls. In the process they found iron axes, rosaries, beads, knives, medallions, padlocks, scissors, two Venetian glass bottles.

AN ODD procession of cases has L. come before Mr. Justice Charles Duelos, who rules on rental regulations in Montreal district. A landlord, who was planning to get married, wanted permission to evict a tenant so he and his bride could move into a house he owns. The tenant didn’t want to get out, not knowing where else to go.

The landlord left two hundred dollars with the court as a surety that he would fulfill his part of the obligation. The tenant departed, repeating the words of Mr. Justice Duelos—“Many things might happen in the meantime to delay the marriage.”

In another case a landlady sought possession of a three-room flat occupied by one of her tenants. She explained that in the lease the tenant was forbidden to keep pigeons, fowl, dogs, cats or other animals, and that the tenant shared his quarters with four dogs and two cats. Mr. Justice Duelos sighed, shrugged, told the tenant he would either have to part with his pets or his flat.

The Labrador question has popped

back into the limelight. Premier Godbout recently indicated that he will seek to have the territory—with all the possibilities it holds for postwar development—restored to Quebec.

When the subject came up in the Legislature the former Premier, Maurice Duplessis, declared that when the Privy Council decided Labrador belonged to Newfoundland, in 1927, it was because Quebec and the Dominion fell down in presenting their side of the case.

Mr. Duplessis thought perhaps Newfoundland, in recognition of the part Canada is playing in the defense of the continent, could be persuaded to return Quebec’s north shore to Quebec without an argument in the courts. Other legislators seemed less optimistic.

Irene Murial Vivian Hornby made a business of matrimony. In Montreal Criminal Court recently she was convicted of being a bigamous bride four times. While the case was being heard, detectives were rounding up evidence that her score of bigamous marriages was actually seven—that she had recently said “I do” to three other glamour boys.

Most of Irene’s husbands were in the armed forces. She liked uniforms —and dependents’ allowance cheques. She was sentenced to four years in prison.

INDIANS ALONG the St. John River have heard how important it is that food production be increased

and plan to help out by picking more fiddleheads this season. Fiddleheads are the small, tender, curled-up sprouts of bracken ferns and many New Brunswickers wouldn’t trade you a pint of them for a bushel of new asparagus tips. They are served boiled and buttered, are said to have great nutritional value, and have a flavor like nothing but fiddleheads. They grow wild in most parts of Canada but seem to be eaten in few places outside of New Brunswick, where the whites caught the habit from the Maliceet Indians. At Fredericton a cannery has put up a small pack each spring for several years and cans have been shipped to former New Brunswickers in many parte of the world—a rare treat from home.

The town meeting, an institution as old as the first British settlements in North America but abandoned through the years by most larger centres, has been revived in Saint John. When a contentious issue arises now Mayor Charles Wasson calls a public assembly, invites citizens to step up and speak their minds. He hopes this will make for more democratic administration, give the city council a better idea what the people want, and at the same time let citizens know that nobody is trying to put one over on them.

Earlier in the war most Halifax people thought enemy air raids on their city were inevitable, made elaborate preparations for the worst. Test blackouts had a grim realism which those in inland cities lack.

There was always the feeling that this time it might be the real thing, that the careless fellow down the street, slow in turning his lights off, might be endangering lives.

But almost four years have passed and nothing has happened and few do much worrying any more—except officials. Aware of spreading complacency, the Atlantic Command in Halifax gave a sharp warning that air raids are “far from outside possibility.” Even this has caused no rush to buy bombardment insurance. Nor are gas masks, which Haligonians may purchase for a dollar and a quarter, in any great demand.

More discussed in Halifax than the prospect of being bombed is the shortage of hard liquor. A while ago the Nova Scotia Liquor Commission cut the ration to a pint a week to make meagre stocks spin out. At the same time there were reports of a run on lemon extract, rubbing alcohol, shaving lotion and stories that a “cocktail” sold by waterfront bootleggers had as its base liquid drained from shoe polish.

Hundreds of two-pound packages are reaching Prince Edward Island by mail and express these days from the Southern United States—and if you listen closely you can hear them buzz. Each package contains ten thousand bees—enough to produce seventy-five to a hundred pounds of honey. To stretch out sugar rations, Prince Edward Islanders are planning the biggest honey production in history, and accordingly importing more bees. 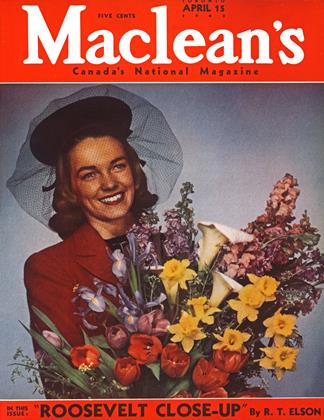