BACKSTAGE AT OTTAWA THE MAN WITH A NOTEBOOK May 1 1943

THERE IS more than newspaper talk in the reports that big departmental changes are being considered on Parliament Hill. Unquestionably there is a growing realization that sooner or later the Trade Commissioner service must be merged with the Department of External Affairs. The argument is that international control of trade after the war is inevitable and that the sort of trade commissioner service which Canada boasted before the war would be at an almost hopeless disadvantage unless it were tied in with the political machinery responsible for operating these controls on the policy level.

In Canada this would be the job of the Department of External Affairs and if our trade commissioners are not tied in with this department, then work and responsibility become narrowed and trifling.

Plow soon or how completely this change will come about is anyone’s guess. The blueprint for such a merger has already been made public in Great Britain. United States completed a similar shift a few years ago. But Prime Minister King doesn’t like the sort of problems which such a change would raise. Unless considerable pressure is brought to bear, the situation may drift along for some considerable time.

Such delay would be resented by younger members of the trade commission service, many of whom are home on war jobs at the present time. They see the writing on the wall and are keen and eager to have their service reorganized. * * *

Some observers profess to see such developments as the spearhead for further important changes. They point out that Canada is the only country which still has one agency for making financial policy (The Department of Finance) and another one to administer it (Department of National Revenue).

The latter department faces internal reorganization in any event since one of its senior officials, Hugh D. Scully, Commissioner of Customs, has been transferred to External Affairs as Consul-General at New York. It is argued by some that now would be a logical time to effect a larger shuffle and place financial policy and administration under one minister.

Another proposal which has currently been revived and which has important backing is the plan to create a separate Ministry of Economic Warfare. Were this done it would almost certainly be given responsibility for Postwar Reconstruction as well. It would doubtless emerge around the economic brain trust which has been created since the war in the present

This year, ♦ more than ever, Mr. Usley’s budget program depends on the success of the the Victory Loans. That is because his 1943-44 plans throw an increasing burden on the voluntary investor. It is the voluntary purchase of

Victory Bonds by the man-in-the-street which will largely decide the extent to which further inflationary bank borrowing can be avoided.

That is why Ottawa puts important emphasis on the new plan for separating the subscriptions of the big and little buyer. Till now we’ve ballyhooed a big, single campaign goal. Now for the first time the man-in-the-street has a loan total of his own, apart from what is subscribed by corporations,institutionsand “special names.”

There has been argument on this policy almost from the start of the war. The step now taken marks public recognition of the need for drawing a line between different kinds of subscription dollars. Ottawa has at last admitted publicly that the best dollars are “double-duty” dollars—dollars which not only help finance the war but which buy bonds in place of going

Chairman George Spinney is asking at least $500,000,000 of these double-duty dollars. This is an increase of one third over the average of $330,000,000 collected annually from small individual subscriptions in the last three loans.

But Victory Loans are now scheduled once in six instead of once in eight months. This means that the rate at which Canadians are asked to buy bonds is more than doubled, accelerated in fact from $40 millions to over $80 millions a month.

Another yardstick is the number of individual subscribers. In the first Victory Loan there were less than a million subscribers. Last October there were over two million. Now the goal is three million.

OTTAWA HAS experienced Canada’s first compulsory housing survey. Although it uncovered a few vacant rooms its primary purpose was to provide factual proof of how close the capital city was to the housing saturation point.

The next step will be not to enforce compulsory billeting, as many Ottawans feared,

Chief stumbling block to such a plan is said to be the acute social problems and distinctions which it would raise. For example, should a colonel’s wife have priority over the wife of a buck private who wants to move near her soldier husband?

Out of it all is likely to come a country-wide appeal to young wives and families to stay put and not follow their husbands around the country. That, as much as the influx of new civil servants, war workers, etc., and their families, is said to be responsible for most housing congestion. This is true even in Ottawa, which is not by any means a “military” town.

The black cloud of a continentwide food shortage is causing concern here. Farmer Gordon Ross, Liberal M.P. for Moose Jaw, raised the matter frankly in the House a few weeks ago when he said:

“The farmers of the United States and Canada have been asked to produce in 1943 some hundreds of millions more dozen eggs than in 1942, about three billion pounds more milk, five million more sheep, seven million more cattle, and forty-two and a half million more hogs.

“Under ordinary circumstances this would mean an additional one billion bushels of grain for feed. But. . . today North America is short more than two million tons of high protein concentrates. That deficiency must be made up by the feeding of additional grain, which will mean the addition of at least 200 million bushels to the figures I have just mentioned.

“Figure it any way you like; in less than two years we shall land up without sufficient food in North America.”

Without waiting for present big stocks of feed grains to disappear, Canadians already face shorter rations in 1943 by reason of a complete reversal in U.S. position within recent months. When 1943 food plans were being made late in 1942, the U.S. was optimistic and generous in its promises of what it could do to feed England and other United Nations. Now it has changed its tune and slashed British and LendLease commitments right and left.

British officials broke the sad news to Canada early in March; sought Canada’s aid through upping our already big 1943 export quotas. Later there was a closed-door conference between Canadian and U.S. food experts here in Ottawa, preliminary to the round-table food conference of all United Nations.

of 1943. Only bright spot for Canada is the early and optimistic crop report news now coming through from western prairie plains.

But no amount of good weather can help crops that aren’t planted, or comfort the farmer who can’t get help. It is now publicly admitted here, that 400,000 men have been stripped off Canadian farms since the war. Even to get farm manpower back to the September peak of last year will require the finding of 250,000 farm hands.

The Conservatives urge higher prices as the solution for greater production. They hope to force the Government’s hand by proposing on behalf of the farmer some alternative to the present form of wage-price control. Their arguments arestrengthened by the fact that price control in the United States now appears to be slipping badly with the prospect of a rapidly increasing spread between farm prices here and south of the border.

It would take huge and almost impossible subsidy payments to try and hold the present ceiling and at the same time meet present demands for higher “parity” prices.

Some observers here fear the Government may capitulate all too easily unless some real evidence of stiffened public opinion against inflation is forthcoming.

THE MOST important result of the Eden visit was what Ottawa (and Washington) found out about the man himself. Till his recent visit, many had thought of Eden as a “nice fellow”—idealistic, charming, highly personable. Now he emerges with unexpected strength and maturity. In his talks with the war cabinet, he was modest without being humble; showed unexpected toughness which gave drive to a keen, clear mind.

He has changed his views about the way to handle the Germans after the war; wasn’t fooling or just flying a kite when he said they must be disarmed. He favors splitting Germany into a number of small units in place of the present huge Reich.

He showed a significant understanding of the viewpoint of smaller countries in the United Nations fraternity. He holds consistently, of course, to his deep-rooted convictions on collective security.

Chief bone of contention during his visit was a protracted private argument with Wartime Information Board officials over the use of the word “Empire” in his speech. W.I.B. won the argument and Eden called it “Commonwealth.”

Remember the publicity about the baby girl born to Princess Juliana some months ago?

Best kept secret of the confinement was that Juliana was suffering from a good dose of old-fashioned mumps when the baby was born. 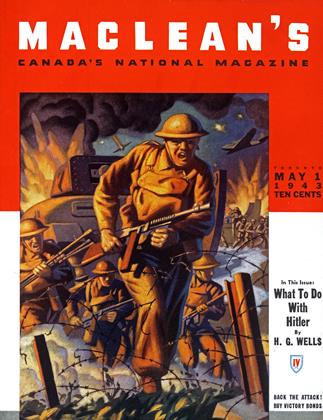