STRANGE indeed is the story of Lord Louis Mountbatten, ViceAdmiral, Lieutenant-General and Air-Marshal, the head of Combined Operations. It begins in the early summer of 1914.

Winston Churchill was First Lord of the Admiralty. His servicechief was Prince Louis of Battenberg as First Sea Lord. The war clouds were threatening but as usual the overoptimistic British, having no love of war in their blood, refused to believe that anything would really happen.

The Grand Fleet had completed its manoeuvres and normally should have dispersed to its far-flung stations. Prince Louis took a drastic decision. He sent instructions for the Fleet to remain mobilized. Then he told Churchill what he had done and Churchill approved. When the war came the Navy was ready and concentrated on these islands.

Three months later the wildest rumors began to circulate in London. Nothing was too preposterous to be believed and the victim of it all was Prince Louis. It was whispered that he had tried to sail the Fleet out to surrender to the Germans, that he was under arrest in the Tower, that he had been dismissed.

When it was realized that the handsome and rather sombre Prince Admiral was still at his post there was a great public outcry which found encouragement even in sections of the press. He was of German origin and was therefore a suspect.

The King and Churchill and all those who knew of his devoted service begged him to stay. Churchill was ferocious in his loyalty to the condemned man and said that if the Prince was dismissed, he would go too.

The situation was ended by Prince Louis himself. “It is no use,” he said. “The damage has been done. If I remain at my post the public might lose confidence in the naval conduct of the war and you and my associates would suffer. Therefore I resign.”

Thus the Admiral who had given his life to the sea, the man who risked his career by keeping the Fleet mobilized in the crisis days before the war, left his beloved ships and went into retirement.

In the light of later events it is interesting to speculate upon the consequences of Prince Louis’ foresight in keeping the Fleet mobilized, thereby provid-

ing uswiththosefew precious days start atthebeginning of the last war. Had the Germans emulated the tactics of Pearl Harbor and made a treacherous attack, without declaration of war, upon our dispersed naval forces, they might have so weakened our superiority at sea that Britain would have been starved into submission.

But Prince Louis had shown courage, independence and foresight. Thatatleastmusthavesoftened a little the cruel and senseless blow that public' hysteria had inflicted upon him.

Not long afterward the Royal Family changed its name and British titles were bestowed by the King upon those of his relatives who had titles of Germanic origin. Prince Louis thus became the Marquess of Milford Haven and his son, then a midshipman in the Navy, became Lord Louis Mountbatten.

I do not remember when the Marquess died. He simply went into retirement and stayed there.

All that was 29 years ago. Let us bring the story forward to one day last year.

A SLIM, handsome man in naval uniform is summoned to No. 10 Downing Street. Churchill smiles but is obviously deeply moved. “You are to be given command of Combined Operations,” he said, “with the triple rank of Admiral, General and Air-Marshal.”

The naval officer was Lord Louis Mountbatten, formerly Prince Louis Francis, son of the man whom the public had broken.

That was a great moment in Churchill’s life. He not only has a deep sense of history but also of the histrionic. He has a fine feeling for the heroic, his personal loyalty is like a rock, his memory is tenacious. He must have smiled with a certain irony when he saw the enthusiasm with which the British public received the appointment of the

Was that appointment a mere gratification of Churchill’s sense of the dramatic? Was it a gesture to the dead man who had been Churchill’s chief in 1914? Certainly it was both of these things—but it was also much more.

What did the Navy say? “Dickie Mountbatten is the very man for thejob.’’That isthe highest praise which a sailor can win, to have the esteem of his colleagues of all ranks. The Navy is a more intimate service than the Army or Air Force. When a ship’s company puts to sea for weeks at a time no

one, from the Captain to the cook can hide his real character.

I don’t know why Mountbatten is called “Dickie.” And it doesn’t really matter. The interesting thing is to discover what the man is really like and how he happened to reach this spectacular climax in his career.

Let me repeat, it is a strange story.

Although a cousin of the King he was not widely known to the British public until he married Edwina Ashley, the elder of the two sisters who inherited the vast fortune of the late Sir Ernest Cassel.

touching history at many points. They were as handsome a pair as ever stood before the altar and they are still a handsome pair.

Lord Louis’ aunt was the last Czarina of Russia; one sister was married to Prince Andrew of Greece, the other to the Crown Prince of Sweden. The ramifications of the family went far and wide in the avenues of European royalties. The bride was descended through her father, Lord Mount Temple, from the great Palmerston and had possession of “Broadlands,” the country residence of the former Victorian Premier.

Photographers battened on the spectacular pair. Life was not so serious in those days and the illustrated newspapers showed Lord Louis receiving the Cup at Ranelagh when his Royal Navy polo team defeated the Royal Air Force. As Captain he rode with great dash but was deadly serious about the game. In fact if you study his character you will realize that he is essentially serious about most things.

Here then was an agreeable life for a personable and socially distinguished young man. The experts said that there would never be another war and therefore the Navy had become a dead-end career. He had a lovely wife, wealth and health, while two little girl babies had arrived to make their London mansion a home.

At that time social London was tawdry, high-spirited and garish. Night clubs and jazz had arrived. The smart set with no sense of responsibility and no devotion to any cause save enjoyment had drawn the younger people away from the sedate monotonies of old established society.

Because they were a spectacular pair the Mountbattens were constantly in the news. It looked as if they would be the leaders of the new social order.

BUT THOSE who thought Lord Louis a playboy did not gauge the real quality of the man—an intense seriousness of purpose. No son of the manse was ever more determined to achieve success than this favored princeling.

At that time wireless was a hobby for faddists. Mountbatten saw in it the vital nerve centre of naval tactics. He spent endless hours studying, experimenting and improving. He had more than a touch of ability as an inventor although it would be wrong to ascribe genius to him. He is not a genius in anything. He possesses immense powers of concentration and endurance, endless patience and driving force but his mind is thorough rather than flashing To talk to him is to realize that life is real and life is earnest.

Eventually he was rewarded for his diligence by being appointed Fleet Wireless Officer in the Mediterranean. Later on he was appointed Senior Wireless Instructor at the Signals School in Portsmouth.

That was not news, of course. The services weren’t news in those dav3 and we only heard of Lord Louis when he broke his collarbone at polo

or when he was involved in a motor smash.

For the strange thing about this serious, studious young man was that he loved speed—whether it was found in a horse or the internal combustion engine. He had a racing launch which he used to flash along the Solent while all the members of the haughty Royal Yacht Squadron cursed him to blazes as their yachts rocked to his wash. He learned to fly and loved it for the thrill.

War once more. The Germans had run amok and the British Navy put to sea to confine them to the jungle of Europe.

But what a sadly depleted Fleet it was, how cruelly small the number of destroyers!

Lord Louis was commanding a Destroyer Flotilla and leading it as he had led his polo team at Ranelagh. He was dashing in with absolute fearlessness and inflicting heavy casualties on the enemy. When the aircraft carrier Courageous went down it was Mountbatten’s destroyer that came from nowhere to pick up the survivors.

At Crete, where the Fleet had no umbrella, he manoeuvred through the hell and fury of the bombing with a cool, calculating brain which never once was stampeded by the dreadful slaughter all around him.

In one battle with the enemy his ship Kelly was torpedoed and the Germans announced that it had been sunk. Four days later the people in a British port saw a ghost ship struggle into harbor, waterlogged, its decks almost level with the sea, a boiler room was actually open to the waves.

It was superb seamanship to get the wreck home but Mountbatten did it. He had encouraged the wounded, saluted the dead, and never slept until weary, bearded and haggard he brought his wounded ship to rest and went ashore.

THAT IS the story of Louis Mountbatten. When I was in Washington in 19411 met Lady Louis at the British Embassy. She was visiting the U. S. A. on a joint mission for the British Red Cross and St. John Ambulance Association. Her husband was there, preparing to take over command of the aircraft carrier Illustrious which was being repaired. He and his wife were at last, on foreign soil, able to have a few hours’ companionship.

Noel Coward really has immortalized his story and the story of the destroyer Kelly in his splendid film, “In Which We Serve.”

Will Lord Louis prove a success in his new task? One cannot say. The job of co-ordinator is the most thankless in a war. Even though he be an Admiral, a General and an AirMarshal he commands directly no ships, or troops, or airplanes.

There is complete secrecy about his activities and his plans. I do not

know how much he had to do with Dieppe but that episode will raise no monuments save to the fierce bravery of the men who fought.

He is thorough. He is stubborn. He is serious. By day and by night he works on and on, is never seen at a theatre and hardly ever at a restaurant. The Germans fear him for they know of his dash and skill when he led his destroyers at Crete.

Lord Louis has something to avenge—the breaking of his father whom he worshipped.

He is not dramatic. He does not live in the atmosphere of the heroic. But when he finally lets loose the javelins of wrath his heart will cry out: “For England and the memory of the man whom England spurned.” 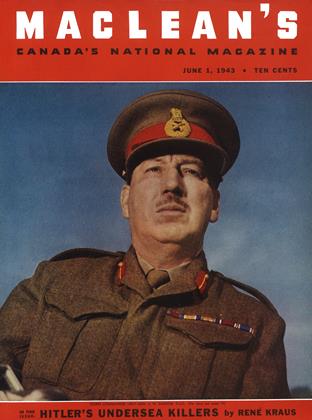