WE WERE one of those enthusiastic amateurs who hurried out after the first spring thaw to spade up a little back yard that had never been intended to contain anything but grass, a clump of the undefeatable spiraea and a deck chair or two.

We had been told that every empty space of ground was a potential Victory Garden so we went impulsively to work. We turned over the top soil which could barely support a grass plot and a few dandelions, and our spade went into a mixture of clay, bits of coal, old dog collars, builder’s lime and broken teapots.

Anyone who could raise a successful vegetable garden on that terrain could probably grow bananas on the Laurentian Shield. But we didn’t know that. We sorted out and smoothed and raked and when it was finished the little patch, to our inexperienced eyes, was already spread with promise. Then we hurried out to buy vegetable seeds.

We bought everything. Radishes and lettuce and parsley and onions and cucumbers and tomatoes, so that we could rush salads straight from the garden to the table with all their vitamins intact. Warned by the spring potato shortage we put in a corner of potatoes; and remembering how last year’s celery just toward the season’s end had the look of old vellum and much the same flavor we added a corner of celery. We put in peas and beans and rhubarb roots and then, just for the devil of it, kale and eggplant.

After that it began to rain. It wasn’t the warm encouraging spring rain we had been looking for but an incessant dreary wet with a hint of sleet that turned our little Victory Garden into a Slough of Despond. We lost interest in it then for a while. But with the first warm days and discovery that the garden was actually putting out a timid green rash our enthusiasm came back with a rush, and we got out our trowels and cultivators and garden hose.

dandelion. We rooted out the dandelions and the burdock (rhubarb?) and the plantain (spinach?), and our Victory Garden began to breathe a little more easily. And when the interest in weeding was exhausted we got out the hose.

For us hosing is one of the pure delights of gardening. Y ou can lounge comfortably on the back stoop and watch the late afternoon sun lay a prism across the sparkling arch of water. Y ou can turn the stream as a skipping rope for the children or print your initials with it on the back of the brick garage. Or you can use it to chase cats. And when the play-spirit has exhausted itself you can just sit back on your elbows and water the garden. We watered tirelessly. And when the sun came out next morning and baked the garden hard we figured that this was all to the good, since a solid blanket of concrete would seal the insects out and the moisture in.

It didn’t work out that way. The garden baked slowly down to the roots and the slugs and insects multiplied joyfully.

About this time too we began to be aware of the sparrows and starlings. They had been hanging round for weeks waiting for the lettuce to come up

and they swooped down with happy cries on the first timid signs of green. We tried a policy of appeasement, scattering bread ?nd cake crumbs as far as possible from the lettuce bed, and when news of the handout got round it brought more sparrows and starlings who cleaned up the bread and cake crumbs in no time and then settled down to the serious business of eating lettuce.

Tired but game, we rigged up a scarecrow, a fierce-looking figure with a forked hand upraised in the V-for-Victory sign, but it just gave the sparrows and starlings a laugh. City sparrows and starlings are cheeky, voracious and utterly cynical. If you drive them away they are back before you are in the house. They can eat their weight in lettuce and then come right back, popping with energy and vitamins, for more. In the end we just gave up and went back to buying iceberg head lettuce from the Chinese fruit store.

In the meantime the green aphis were spreading slowly and tirelessly in all directions. The potato bugs were all ready to begin to nestle comfortably on the underside of the potato leaves. The cutworms were sharpening up their wicked little mandibles and some of them had already gone to work and were toppling the tomato plants. It had been a long cold spring and though our Victory Garden looked far from appetizing the bird and insect world was much too hungry to be choosy.

There are times when the amateur Victory Gardener comes to the despairing conclusion that Nature is on the side of the Axis powers. This, of course, is silly defeatism, since we can be sure that in all the little German Sieg Gartens she is working tooth and claw on the side of the democracies. Fact is Nature resists cultivation impartially wherever and whenever she finds it going on. She is cunningly and actively organized in every department too, with trained corps of garden pests, each with its special equipment and specialized job of destruction.

What is more, she has worked out a superb system of camouflage—protective coloring varied by spots, stripes and dapplings—and she has a Continued on page 55

different outfit for each insect to correspond to the plant he is busily ruining. She has guerilla fighters lurking in last year’s underbrush, underground sappers who work at the roots, and an armored beetle division which can bore through the toughest stalks. And she keeps green aphis as a permanent occupying army.

Experienced gardeners know all this in advance and are prepared to deal with it. Long before the season opened they had burned anything that could harbor the enemy and large sections of the enemy along with it. They had rooted out the burdock and couch grass and pigweed. They had poison sprays ready for the first attack and booby traps waiting for the cutworms—bran muffins sized with molasses and laced with Paris green.

On the other hand, we were still keeping up our hopeless battle against the insect world. We had tried flooding them out with the hose only to have them come right back next morning, refreshed and stimulated by the bath and reinforced by all the descendants they had accumulated during the night.

We had experimented with the bran-molasses-Paris-green bait, but by the time we got it mixed and set out the cutworms had finished mopping up and retired to prepared positions to get ready for the next campaign. We had attempted a halfhearted spraying and it hadn’t worked, since Nature is teeming and prodigious and can handily reproduce a whole new colony of pests from a few suitably mated pairs. . .

By this time our Victory Garden was beginning to get noticeably on our nerves. The insect world seemed to be thriving on cur poison baits and sprays, and as we lay awake at night we could even imagine that what we heard was the mating call of the flea-beetle under the potato vine.

We had been promised that a Victory Garden meant economy, fun, work, vitamins and patriotic service. So far all we had got out of it was work. And we began to think longingly of the days when the backyard was a nice shady spot containing nothing but a plot of grass, a spiraea bush and a deck chair or two.

ACCORDING to the experts there - is only one thing for the amateur Victory Gardener to do at this point; write the whole thing off and start afresh somewhere else.

There is still time to plant and raise a flourishing Victory Garden in 1943. But it has to be done in an open lot—never in a shady filled-in backyard—with loose soil at least eight inches deep and a chance of full sunshine six or seven hours a day.

A suitable location is the first rule for a Victory Garden.

The second is that there is no substitute for weeding and cultivating. Forget about the hose, say the experts and get busy with the hoe.

mulch which keeps theplantshealthy, aired and reasonably moist. It also keeps down the weeds which harbor all sorts of insects in both the larva and the adult stage.

All sorts of insecticides are recommended by editors of garden columns and pamphlets and to the amateur most of them sound pretty complicated. Few nonprofessionals know where to lay hands at a moment’s notice on corrosive sulphate, diluted Derris or calcium arsenate.

The experienced gardener I consulted advised strongly against mixing up these homemade witches’ brews in the family kitchen. He pointed out that it was dangerous and uncertain and that any good seed or hardware store could supply a suitable commercial poison in the right quantity and at a moment’s notice.

As a garden vigilante, before shopping for your insect poisons you should diagnose the nature of the “beasties” you are to cope with. Find out the particular type of insect he is for all procedure depends on this.

YOU KNOW, for instance, that most enemy insects fall into two groups: the suckers or the chewers. The former have piercing and sucking mouth parts with which they extract their food from under the surface of the foliage. Putting poisons on the outside of the leaf, therefore, does no good.

Burning or choking sprays or dust must actually reach the insect if they are to kill it. Nicotine-sulphate is the most commonly used contact insecticide.

The biters or chewers include beetles, caterpillars and grubs. These raiders may be brought low by means of stomach poisons applied either as poison bait or as sprays and dusts used to cover the plants in advance of their ravages. In making baits mix the poison with something more tasty to the insect than its usual fare. Stomach poison for such creatures as grasshoppers, cutworms, army worms and ants are usually a lead arsenate.

If you can possibly manage it, protect your new lettuce with a stout wire netting. This will probably drive the sparrows and starlings hysterical with frustration; and serve them right.

The final note, a rather plaintive one, comes from a friend who has spent most of the spring and early summer on forced visits of inspection to the Victory Gardens of all her acquaintances. Her conclusion is that a garden is a good deal like a perverse and difficult child. It may be a lovesome thing, but only (God wot) to the people who have gone to the trouble of raising it.

When you find yourself in this state of mind there is only one thing to do. Go out and raise a Victory Garden of your own. 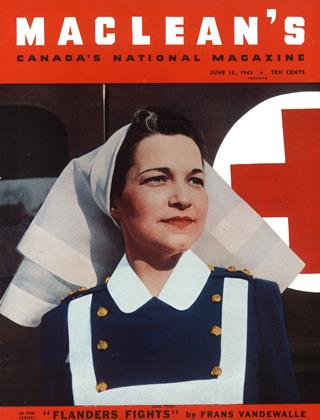