The Road Ahead BRUCE HUTCHISON August 15 1943

ALMOST unnoticed in the litter of a dying Parliamentary session, a Canadian foreign policy has begun to emerge in Ottawa. We have been waiting for it, struggling slong without it, paying for its lack in blood and treasure, for these last 25 years.

Three basic principles seem to be accepted at last by Parliament: (1) collective security

under some form of world league; (2) full participation in the British Commonwealth as an equal partner; (3) closest co-operation with the United States.

None of these things is finally possible without the others. They are all essential ingredients of the larger thing for which the war is being fought—that is, security combined with freedom.

Stated thus, these principles sound obvious, trite and commonplace. We have always proclaimed them. But the record of the last 25 years shows that we have never really meant them.

The question which now arises out of the discussions of Parliament is whether we have truly learned the folly of a policy of no-policy, the necessity of wide and dangerous commitment, and the inevitable fact that we shall be involved in any and every world war

Mr. King apparently has learned this lesson. He was oire of the chief architects of the policy of no-commitments. He was the fair-weather friend of the League of Nations, and he was one of those who hoped that somehow, by keeping our heads in the sand, we might dodge the approaching war. But his record was as good as the record of his opponents, often better. The truth is that he and the other politicians all reflected the mood, the evasion and the false hopes of the people. Except for a very few men, we were all parties to the general delusion.

Now Mr. King,says that even before the war is over we must build an international organiza-

tion to embody the concept of the United Nations. This can only mean that Mr. King has come back over a winding and terrible road, to the principle of collective security, the principle of the League. Certainly an organization to embody the concept of the United Nations cannot be the debating society, the mere conciliator which Mr. King used to recommend as a workable League. In fact, Mr. King’s outline of this new organization’s great functions and general authority shows that he is thinking of a League which possesses unchallengeable power—power enough to halt aggression anywhere.

No politician will ever admit that he was mistaken. It is the tradition of the game to announce a new policy as if it were the logical outcome of everything that has gone before even if it is the very negation of what has gone before. So Mr. King does not tell us that he has abandoned forever the theory of no-commitments. Nor do the other politicians. But their speeches show that this policy of no-policy has gone forever in our Parliament, is held now by only a few French-Canadian extremists and certain western apostles of monetary magic.

Parliament has thought its way through the bewilderment of these 25 years. Have the people thought their way through? Do we understand yet as a people what the new policy will mean, must mean?

It means that we must make firm engagements, binding alliances and fulfill them at any cost, if war comes again.

It means we must be prepared to fight anywhere in the world against any aggressor who disturbs our friends. Since we do not want to fight, it means that we must do our part to prevent another great war—means economic co-operation with other nations, reasonable immigration policies, new tariff policies, a readiness to share our wealth with the world.

It means, in brief, that Canada must act like a nation which cannot unload its responsibilities, its duties, its risks on anyone. We had better understand that and agree on it, for a foreign policy is no use unless it is backed by the whole people, unless our friends and allies can count on it, no matter what government happens to be in office. 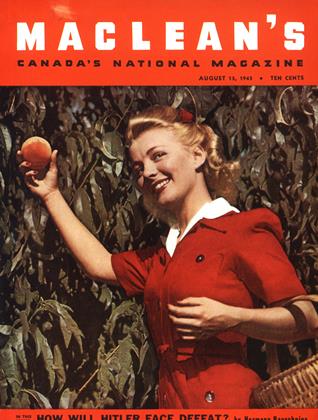