BACKSTAGE AT OTTAWA THE MAN WITH A NOTEBOOK September 15 1943

THE Quebec Conference came at just the right time for the Mackenzie King Government,asthe domestic political situation had begun to turn sour from a Liberal’s point of view. When the Ontario election returns came in on Aug. 4. Mr. King was already engrossed in preparations for the Allied Conference which was opening Aug. 10. When the four federal byelections were reported Aug. 9. he was already in Quebec, like the nervous hostess straightening the chairs for the tenth time before the front doorbell rings. He was too absorbed in conference details to offer comment on the election results.

His final word to political lieutenants, as Ottawa understood the Liberal position, was—no compromise. Let Col. Drew form his government, they said on Parliament Hill, and let him obtain Liberal support on the same terms as he seeks CCF support, if he needs it, by making his administration pleasing to the hearts of the voters. In that way Col. Drew could avoid trouble if he were skilful enough. He could remain for a full term by preventing all his opposition from uniting against him on a crucial issue. Meanwhile, said the Liberals, let us see what the future and the CCF will bring in other parts of Canada.

Doffing the robes of politics and donning the accoutrements of world statesmanship Mr. King was doing somewhat better. As leader of a key member of the United Nations he was taking Canada into the big league for the first time. For a comparatively new world power Canada picked off a choice first assignment—host to the greatest military and political planning conference of the war. It was quick fulfillment of the principle Mr. King laid down in the dying moments of the late parliamentary session when he said that the problems of war and peace should not be disposed of exclusively by the

large nations. Whether or not Mr. King had previously bid for a world-shaping conference in Canada, the call came suddenly. Four days’ notice was allowed hotel and civil officials in Quebec to lay plans for dismissing a lucrative tourist trade. The Canadian Government had a few days longer in which to round up its chiefs of staff, its military experts, its major-domos and its corps of press followers. Col. Ralston arrived back from England suddenly, called home in the middle of a conference with General McNaughton.

CANADA’S conference arranger-de-luxe is Dr. E. H. “Ephie” Coleman, undersecretary of state. He performed housing miracles in Quebec. Personnel at the Quebec Conference numbered more than 1,000 at times, of whom 400 were military experts. An American spokesman described them as “the pick-and-shovel workers” of the conference. The rest were clerical and security staffs. The British party numbered nearly 400, though originally accommodation for only 200 was asked. The American party equalled the British.

Dr. Coleman’s toughest housing problem came when the Governor-General and Princess Alice arrived in their special train to be host and hostess at a state dinner in the Citadel. Already installed were Prime Minister and Mrs. Churchill and Lieutenant Mary Churchill and Prime Minister King. A suite had been reserved for President Roosevelt who was arriving later in the day. There was no room in the Citadel even for the rightful occupant, the Earl of Athlone himself. What does the tactful housekeeper do when more guests arrive than the house can hold? The Governor-General and Princess Alice solved Dr. Coleman’s dilemma by remaining overnight in their viceregal train on a railway spur. No one complains now, as Members of Parliament did at the time, about Lady Willingdon’s foresight and “extravagance” in making the Citadel habitable.

If Russia and China, not to mention other member-states of the United Nations, had been invited and accepted, Dr. Coleman’s task would have become impossible. The Russians said: “The Soviet Government did not receive an invitation to be present at the meeting, and because of the character of the conference the participation of any one representative of the Soviet Government at the meeting in Quebec was not and is not suggested.” This meant to Canadian officials that Russia was not coming to the conference with half a dozen experts because right now they need their military experts at home. So Dr. Coleman was entitled to heave a sigh of relief.

But some day the Russians and the Chinese and all the other United Nations will be gathered in conference. That day may be closer than we think. Then, not 1,000 but 5,000 persons wiLl have to be provided for. This is the estimate made by Canadian observers with an eye to future prospects in the world conference business for Canada.

At the peak the press and radio corps numbered more than 150 men and women. This number allowed 50 correspondents from each participating country. Six Australians were included in the British press delegation; one Russian was included with the Canadians, since he was Ottawa correspondent of Tass; and one Chinese, a Washington correspondent, was included with the Americans. The number fitted exactly into the accommodation in press headquarters established in the Hotel Clarendon.

Fast fighter planes of the Royal Canadian Air Force flew in pairs as a protective cover over Quebec. Some of the anti-aircraft guns were in plain sight such as a businesslike Bofors tended by a French-Canadian gun crew in the shadow of the Chateau. Others were hidden from tourists’ gaze in a prohibited stretch of the Plains of Abraham battlefield.

Talk of a possible German suicide attack on the Citadel was kept out of news dispatches, but not from the tavern gossip of Quebec. But the key figures of the conference, in their guarded residence in the Citadel, enjoyed the protection of North America’s safest air raid shelter. This year workmen, when excavating, cut into a forgotten underground passage deep in the rocky cliff of Cape Diamond atop which sits the old fortress. In its 335 years of stirring history the Citadel and its predecessor fortresses of old Quebec have struck deep roots into the heart of the limestone crag. Down in the ancient vaults even a block buster might be heard only as a distant thud.

DURING frequent lulls in conference news, correspondents wrote of Quebec and French Canada. If the city lost thousands of’dollars worth of tourist business it gained thousands of columns of publicity in the press of the democratic world. To many observers from Britain and the United States it was a first opportunity to examine French Canada’s or all Canada’s role in the war. They discovered that among Quebeckers the flavor of De Gaullist sympathy was now strong. Mr. King’s cheeks may have blushed when a French newspaper, L’Action Catholique, announced its joy that Premier Josef Stalin was not coming. If so, he said nothing. The Quebec papers were not accustomed to being examined each day by a headline-hunting corps of correspondents.

What outsiders found in Quebec was a province in which half the Canadian industrial development of war has taken place; in which criticisms of the war, such as they remain, arise not from lack of fighting tradition but from sober dislike in staid and clerical circles to the social upheavals of war. The cry that the war effort is too great is the cry of reaction against war as an agency of industrial revolution which strikes a heavy impact into the social fabric of Quebec. 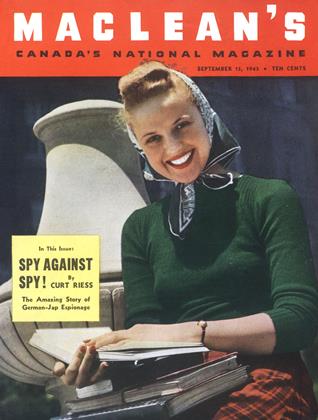