SKYROCKETING prices and record catches have brought one of the most profitable years in memory to New Brunswick fishermen—and all despite the fact that fewer fishermen are setting gear. This boom is most in evidence along the province’s North shore where, in 1939, a $200,000 quick-freezing plant was erected at Caraquet, making possible new fish products for new markets. Three more quick-freezing plants may go up before next season if the equipment can be obtained.

The southern coast is literally crawling with lobsters, and residents of the Northumberland Strait and Bay of Chaleur districts are rejoicing over the return of oysters in large numbers to the “beds” in that area.

One unusual outgrowth of the current boom is that Bay of Fundy fishermen report they are getting mort; per pound for herring scales — (used in the manufacture of imitation pearls and pearl buttons)—than they used to get for the herring itself. The loose, more “mature” scales, which drop off the fish during handling, bring the biggest prices. The average price is about 16 cents a pound and fishermen have more orders than they can handle. The scales are shipped to plants at Eastport, Maine, where they are processed into a lacquer. During this process the exterior sheen or “pearl essence” of the herring scale is lifted off and dissolved in a lacquer which, when applied to glass beads or ivory nut buttons, gives them a pearlish appearance. At one time the method of processing was a closely guarded trade secret.

Plans for the future, drafted by the Prince Edward Island Committee of the Canadian Conservation Commission, include a suggestion for the construction of a tunnel or causeway, linking the Island with the mainland. However, the committee recommended a new car ferry as the most immediate solution to the Island’s long-standing problem of transportation with the mainland.

Agitation for the tunnel first started shortly after Confederation and has continued intermittently ever since, but the Dominion Government’s recent announcement plumped for a new car ferry.

The late Senator G. W. Howlan was a great exponent of the tunnel about half a century ago. Sir Douglas Fox, one of his contemporaries, prepared plans for such a project but nothing was done about it. The causeway proposal was a live issue 30 years ago with the late W. C. Harris, Island architect, as its chief exponent. Most agitation for construction of a tunnel or causeway is heard during the winter months when heavy ice in the Strait ties up water transport.

Returning from Ottawa recently, Mayor B. Roy Holman, Charlottetown, announced a contract for building a new car ferry would be given a Sorel shipbuilding firm. Government plans call for construction of a palatial icebreaker, largest of its kind in the world, costing about $5,000,000. This will replace the $3,000,000 Charlottetown, sunk a couple of years ago on its way to dry dock.

BLACK marketing in rents is a real problem in Montreal. Just as the key to a Vancouver apartment was offered for $50 above the rental (Cross Country, Dec. 15), Montreal landlords have developed several dodges for evading rental ceilings. One landlord informed a prospective tenant after she had signed the lease, that she could have his apartment but that he would require $65 extra to put it in shape. When she protested the apartment was in good enough repair for her needs she was curtly told—“No $65, no apartment!”

Other landlords have demanded prohibitive sums over and above regular rentals before signing a lease. Such sums are strictly a “cash proposition,” with the rental demanded by cheque and the “pay-off” in cash. Most remarkable case yet reported was that of a landlord who told a tenant she would have to buy the furnace in his house before she could rent the property.

RECENTLY, Lewis Duncan, Toronto controller, questioned the conduct of Deputy City Clerk George Weale on the ground that it was understood Weale had been seen at unusual hours conferring with another city controller. Duncan asked Weale if he had been collaborating with the controller or with any other persons in the matter of the city election held on New Year’s Day.

Weale, a war veteran, took this as an insult and the Toronto Civic Employees War Veterans Association backed him up by suspending Duncan’s membership. Because a considerable number of votes was involved most politicians would have tried to calm the troubled waters—but not Duncan. Himself the winner of a Military Cross in the last war, he defended his right to have asked such a question by saying;

INCREASING prosperity of Manitoba municipalities has brought grief to the Provincial Government’s official Gazette. Manitoba law compels municipalities to publish tax-sale notices in the Gazette, paying for them as advertising. In depression days, when people were losing property for nonpayment of taxes, the Gazette flourished. Now that landowners can meet tax payments promptly, the 72-year-old Gazette is suffering from malnutrition.

Beer orders placed by telephone so jammed the Manitoba telephone system recently that calls could neither get in nor out of the CNR telegraphs which happened to be on the same exchange. To eliminate the headache, officials cut phone service for beer to one day a week.

Machinery used in the Alaska Highway construction has been moving back through Edmonton, with dragline power scoops reportedly headed for Wales where they will help ease the coal situation by making strip mining possible. It’s this type of coal mining that has brought a mild boom to several Alberta localities. At Taber great power scoops are ripping topsoil and rock off three such mines, exposing coal deposits expected to yield several hundred thousand tons. Veins close to the surface are chosen and the scoops tear back the overburden (soil or rocky covering may be 20 to 40 feet in depth) to bare the vein. The coal, which is soft variety, is scooped out in great shovelfuls and the power scoop dumps the coal into trucks or other containers and the coal is shipped. The process is not only faster but per capita coal production is higher than more orthodox methods.

Albertans have been eating buffalo steaks and roasts made available without coupons following the annual slaughter of the Elk Island Park buffalo herd. Of the 1,500 animals in the herd 600 were killed this year.

Edmonton’s civic pride rose recently when statistics showed the city second only to Montreal in the value of its new building. Citizens feel much of the wartime boom will be retained in peacetime, and that the figures represent a measure of permanent progress.

Japanese farm hands with romantic ideas have landowners in the Okanagan Valley worried. Japanese girls were among Jap internees shipped from the west coast to help with the harvest. Bachelors of the Valley’s small permanent Japanese population courted them and though some ministers won’t marry them, others will and do. Result; just what Canadians in the Valley don’t want—more permanent Japs in the Okanagan. 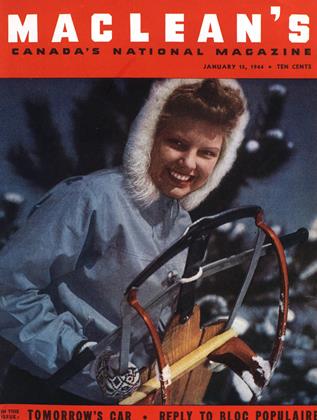