WOMAN, that well-known enigma, is posing a brand-new problem to a Canada already urgently wrestling with prospective postwar problems. Still on the job in her efficient wartime overalls and turban, the Canadian woman warworker is asking one question: “What are you going to do about me after the war?”

She’s asking it half anxiously, half pugnaciously. Anxiously, because, like all the rest of Canada’s warworkers, she’s wondering if the end of the war is going to mean idle factories, bread lines, unemployment. Pugnaciously, because she feels that she’s proven herself in the man’s world, but she Isn’t sure whether the men are going to let her stay there.

In this war. for the first time, women have been employed in men’s jobs on a large scale. They’ve learned what it’s like to make good money. And now they’re afraid that when they aren’t urgently needed they’ll be pushed out of the exciting new life they’ve found. Most of them don’t want “postwar reconversion” to include reconversion of the Woman Worker to the Little Woman.

One look at the statistics will show the size of the problem. In 1939 there were about 638,000 women employed in Canada. Today there are well over a million in civilian employment, not to mention over 40,000 in the armed forces.

Twenty-five per cent of 750,000 employees in “essential war industry” are women; 6% of 190.000 employees in ancillary war industries like transportation, mining, logging and power are women. Even excluding girls in the armed forces, there are about 200.000 Canadian women holding jobs which didn’t exist Indore the war and may not exist after the war.

Women have been riveting, welding, soldering, spray painting. They’ve been driving buses and streetcars. At Frood Mine, in Sudbury, a woman has been operating a 1,000-pound hammer in the blacksmith’s shop; one third of 1,000 workers in Pictou, N.S., shipyards have been women. Women stepped up into personnel jobs, became department managers in firms that mightn’t have noticed them 10 years ago, except to praise their typing.

Are women with such experience going to be content again with “women’s work,” or with total dependence on the family provider?

It’s safe to say that nearly all unmarried women workers include marriage, sooner or later, in their postwar plans. Until they’re married, however, they want to keep on working though a good many of them “don’t know yet what at.” On the question of whether or not they want to continue in employment after they’re married, they’re divided, as are married women workers, roughly on a 50-50 basis.

Walking up and down the assembly lines you find many wives who are waiting for their husbands to come home from the war, so that they can “settle down to the real job.”

You find girls who are planning to go back to their old peacetime job at typewriters and switchboards, in hospitals, schools and restaurants. You find, too, girls, many of them still in their teens, who are taking courses after the shift’s over, saving war bonds to educate themselves for a professional white-collar job after the war.

There are thousands of young war-working Canadian girls like these, with plans made; and there are thousands, too, like Elsie Harvey, 18-year-old riveter, who says: “Guess I’ll keep on working, but I never gave much thought to what it would be. I don’t suppose there’ll be many jobs for women, will there?”

Girls of Elsie’s opinion are stoutly answered by workers like one young shop steward at Boeing Aircraft in Vancouver. She believes that there should be jobs for everyone, including married women, after the war.

“After the war I hope to get married, but even then I would much prefer to work than stay at home,” she says. “There’s no reason why women should be forced back into the home if they’re willing to work elsewhere. Adequate nurseries should provide the postwar problem of providing proper care for the children of working mothers. There Continued on page 32

should be enough jobs under a wellplanned postwar scheme for all who want to work.”

No national survey has been taken to find out how many women want to keep on working. Local surveys have produced widely differing results. One made at Boeing Aircraft revealed that 50% of the women workers, including some married ones, want to remain in industry after the war. A Toronto Reconstruction Council survey showed that only a quarter of all the women employed in Toronto expect to leave their jobs—and this in spite of the fact that Toronto employs a higher proportion of women today than any other centre in Canada.

ÍSixty-six per cent of the Toronto women want to go on working. Twentynine per cent of the women in skilled labor plan to change to white-collar jobs or go into small businesses for themselves. About half the married women employed want to “go back home.”

A federal advisory committee on reconstruction reported a year ago that at least 180,000 Canadian women, exclusive of married women with other means of support, will require jobs after the war. But whether or not those women will get jobs is any man’s j opinion.

Many surveys by all kinds of firms, business and welfare organizations are hopeful about the breadth of postwar employment, but most of them don’t specify what—if anything—will be done in the way of seeing that the new army of women workers will get jobs. A postwar reconstruction enquiry by I he Toronto Board of Trade found 1 hat ¡ employers expected to increase their staffs over the 1989 level by about 8% in the first year after the war—but the ratio of women to be employed stayed

at 36% of the total employment. There would seem to be little hope for the women workers then.

On the other hand executives of 2,400 Canadian manufacturing firms surveyed by the MacLean Publishing Co. estimate that one year after the war they will be employing 17% fewer women than they did in 1943, but 58% more women than in 1939. More jobs are expected for women in animal, vegetable and textile products industries, while heavy iron and steel industries expect to reduce their warswollen total of women workers to the pre-war basis.

The metal trades industry in British Columbia is one example. In 1939 their employment lists included 40 women, only four of them “wage earners” as opposed to salaried office workers, and 1,268 men. Last year there were 5,339 men on the rolls, and 915 women, of whom 670 were wage earners. A survey of the industry states, with some asperity, that after the war “few, if any, of the wage earners would be women, as most of the companies interviewed indicated that they did not consider women efficient in this industry, and too many special arrangements had to be made for them.”

The average man employed in industry seems to share this view of his woman colleague. As far as he is concerned women in postwar industry had better stick to the same kind of jobs they held before the war. The men don’t want them in their blacksmith’s shops or driving their trucks.

“Some of them are okay,” admitted one worker. “But take them all around they’re a darned nuisance in heavy jobs. I guess they try to pull their weight all right, but I don’t know. I just don’t want to have women around my job. Let them stay home and bring up the kids.”

Personnel directors in war industry and employers in offices, however, nearly all say that once personal considerations are allowed for a woman worker is equal to a man. They’ve found out during the war how to keep women happy on the job, and many of their old prejudices have lessened in ferocity.

Women on the assembly line, say personnel directors, can do a better job than men in tasks requiring infinite

patience and delicate finger manipulation. They’re not so good in work requiring strength.

Women, far more than men, must be happy in their home and personal life before they do the best job they’re capable of doing. When a man is absent from work it usually means that he’s sick. Women absentees may be doing the laundry, buying the week’s groceries, looking after a croupy baby, or just celebrating the current beau’s furlough.

Office employers agree that a woman’s personal life comes well ahead of her job. They need more personal recognition and encouragement than men, but on the other hand they are more loyal than men. If a woman is happy where she’s working she will turn down an offer of a job with another firm promising a higher salary.

Some employers wholeheartedly believe that women have proven themselves in this war and are entitled to a postwar career in industry if they want it. “Women who desire employment should be afforded every possible opportunity to work,” says F. P. L. Lane, vice-president of Imperial Tobacco Co.

“I assume that 75% of women working during the war will want to keep on afterward,” comments P.D.P. Hamilton, vice-president of General Engineering Co. (Canada) Ltd. “Employers generally have learned to accept women, and I think that many of them will treat women employees on an equal basis with men.”

But there are still many employers who feel that women aren’t entitled to men’s wages; that married women with other means of support shouldn’t be employed; that women aren’t as capable and reliable as men. In short, they’d hire a man first any day.

By and large the women warworkers who have gone so far toward their real and final “emancipation” still have a long way to go before every employment office considers their applications on the same ground as a man’s.

Probably the best present you could give any worried woman warworker today would be the assurance that a year after the war she’ll be holding down a job if she wants one. Not just a “woman’s job,” mind you, but any kind of job, the job she’s best fitted to do. 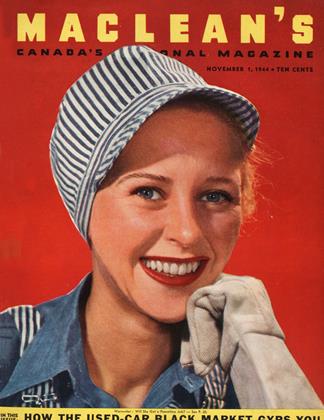