In the Editor's Confidence December 1 1944

WE RETURNED from a somewhat lengthy tour of the West to find the centre panel of our office door partly torn from its moorings. We told our secretary that we hadn’t realized that the earthquake had hit Toronto so severely. She said it wasn’t the earthquake; somebody, guess who, had knocked on it. We didn’t have to guess. We knew—instinctively. Hamish, the composing room Hamish who so frequently managed to worm his way into this column, is back from the war.

Except for the fact that by diligent study and devotion to duty Hamish, step by step, worked his way up to the "rank of corporal, we have so far learned little about his exploits. He has intimated that in spite of his return there need be no worry about the outcome of the battles now waging. He feels that he left things safely in the hands of Eisenhower, Montgomery and Crerar. His reticence in martial matters is born of what he calls “security reasons.” But a chance and explosive remark he dropped concerning motor-bicycles leads us to suspect that he parted company with one with some violence.

Hamish, of course, has not returned to his old role as messenger. He has been elevated. He can now read type upside down. So far as our own personal literary products are concerned, he maintains that they make more sense that way. Darn him, we’re glad to see him back.

Q Having been away we are not too familiar with the contents of this issue. Hamish appears to be reasonably well satisfied with it. In the matter of “Germany Will Try This Trick Again” (page 5), wherein Lord Vansittart and Allan A. Michie team up to expose the German-created myth of the prolonged Allied hunger blockade following the 1918 armistice, and warn that the United Nations’ relief supply policies will again be used as a test of their, firmness, Hamish says, “Those boys know their onions. Never trust any of them Nasties.”

Lord Vansittart, now in his early sixties, was educated at Eton, entered the British diplomatic service in 1902, served in Paris, Teheran and Cairo and returned to the Foreign Office with a distrust of Germany that has never wavered. From 1930 to 1938 he was Undersecretary of State for Foreign Affairs. Since his retirement from government service he has written with such vigqjon the subject of postwar treatment of Germany that the word “Vansittartism” has become part of the English vocabulary.

Allan Michie, Aberdonian by birth, went to the U. S. at the age of 10, grew up with the idea of being a lawyer, went to Chicago University Law School, changed his mind and became foreign news editor of

Firne. He went to London for the 1 ime - Life - Fortune constellation when war broke out, later becoming its Middle East correspondent. In 1942 he became a roving editor of The Reader’s Digest. He has published several books on his coverage of the war, in the course of which he has travelled 100,000 miles and visited 25 countries.

QThe temperature in this office was in the late 90’s one day last August. One of our editors looked in and wanly said, “This place is like a steam bath.” We asked him if he had ever been in a steam bath. He said no. We said it was a shocking state of affairs if editors could drift around likening our office to places they knew nothing about. So we telephoned Gordon Sinclair and asked him if he would go and have a steam bath and tell us all about it. He rather liked the idea. He went. Outside it was 96. Inside the bath it was 120. And 240 men were loving it. It has taken all this time for Gordon to get sufficiently cooled off to write about it, but his report is on page 10. The steam bath is a very interesting industry.

Qj. H. Gray, who on page 18 does a sketch of Manitoba’s Premier Garson, is on the editorial staff of the Winnipeg Free Press; got into the writing business the roundabout way. He started as an office boy in the Grain Exchange. Then for two years he worked from dawn to 8 a.m. as a trainer of race horses and from 9 to 5 as a margin clerk in a brokerage office. He took to writing 12 years ago and has been at it ever since. He has designed and built two houses, fathered 3 children, and gained a reputation for growing roses.

#Norman Matson, author of our short story, “Costume for Victory,” has written seven novels, three plays and more short fiction tales than he can keep track of. As a newspaperman he worked in San Francisco, Nevada, New York, Washington, London, Paris and Vienna; lived for a year in Norway; now does his authoring in Wellfleet, on Cape Cod.

# “Flight to China”—the story of the world’s most fantastic air line— was written by George Johnston, Australian war correspondent, who once tried to make a living as an artist. People somehow preferred his word pictures to those from his brush. He is the author of several books, covering war from the Mediterranean to the jungles of New Guinea.

QOur next issue will be flavored for Christmas. It would never do to unwrap the parcels now, though we're just itching to tell you what’s in them. Oh well, what’s 15 days or so. 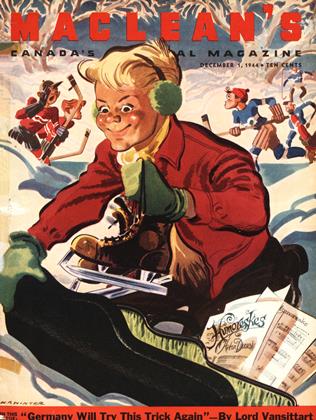