BACK in 1931 a Harvard University vocational adviser told Henry C. Cassidy (“Does Russia Mean What She Says?” Page 5) that he should take up schoolteaching, because he was “too bashful” to become a successful newspaperman.

Bashful Mr. Cassidy lined up a teaching post, but at the last minute rebelled and got a job with the Boston Traveler. Five years later he was on the staff of the Paris Bureau of the Associated Press. He covered the Spanish Civil war and when France fell in 1940 was sent by the AP to Moscow, where he proceeded to win international recognition as one of the ablest correspondents at that capital.

Twice he scooped the world on messages from Premier Joseph Stalin. During the height of the tension over the delayed second front his home office wanted to know what Stalin’s views were. Cassidy tried for an interview. No dice. The Premier was too busy. So Cassidy drew up a list of questions addressed to the Premier, marched up to the Kremlin and handed them to a guard at the gate.

Next day he received a letter from Stalin which answered all the questions and made front-page news around the world. Eleven days later he tried again and got a reply in which Stalin said the Allied campaign in North Africa had turned the war in favor of the Allies.

Bashful Mr. Cassidy—still only 33—early last fall returned to this continent to take an AP post at Washington.

^Flying Officer Alfred J. Houston, whose extraordinary adventures with the French underground are described in “Escape” (Page 7), is insistent on one point: The heroes of the story are not he and his crew mates, who survived the crash of their bomber, but the French men and women who risked life—and in some cases lost it—to make the airmen’s escape from the Germans possible. Prior to the war F/0 Houston was a salesman in Toronto for a drug and chemical firm.

#It was with deep regret that we learned early in November of the death in New York of Frederick Edwards. Over a period of many years Frederick Edwards was one of this magazine’s most consistent and valued contributors. We were amazed, in fact, to discover from our index that between December, 1927, and October, 1942, no fewer than 106 Edwards articles appeared in Maclean’s. In addition he wrote our “Parade” column for a considerable period.

Bom in England, Freddy, as he was universally known to his friends, came to Canada when he was 17. He started newspaper work in Moncton, N.B., and from there moved on to Halifax, Montreal, Baltimore and

New York, where he became city editor of the Herald-Tribune. In the middle 1920’s he returned to Canada to free-lance. Since 1942 he had been on the staff of the New York World-Telegram.

0 Wessel Smitter’s knowledge of the Calvinistic, farm-family background of his story, “Something for Christmas,’’comes naturally enough. He was bom to Dutch parents on a Michigan farm in an Irish neighborhood and assisted into this world by a Swedish midwife. He is the only person we’ve ever heard of who paid much of his way through university with blood money—it was his own blood sold to a hospital. ,

#A little quiet sleuthing has unearthed the fact that Bruce Hutchison, whose analysis of the significance of the U. S. election appears on Page 10 (“Democracy on the Job”), is in process of becoming a Canadian best seller. We are advised that his “The Unknown Country” has sold 28,800 copies in Canada and is still going strong; and that the advance sales on his new novel, “The Hollow Men,” were 6,400, plus a reported distribution through, the Canadian Book of the Month Club of some 13,000.

0 “For the past five months we have been living in Weyburn, where I was born and as a boy spent Saturdays and summer holidays drowning out gophers,” writes W. O. Mitchell in his latest bulletin from the south Saskatchewan world of Jake, the hired man, Miss Henchbaw, the teacher, and the Kid (“Frankincents an’ Meer,” Page 14). “The municipal office no longer pays three cents for gopher tails ... In our spare time we have been polishing and reupholstering some pieces of 14th Century style Italian furniture ... I would hate to have Jake pass an opinion on any of it . . . There might be an idea for a Jake story there.” And why not?

# Playwright, part pundit, part elf, wholly himself, swarthy, brooding, swashbuckler—all these terms come to mind when one thinks of Merrill Denison, who in “What About Television?” (Page 17) swashes a mean buckle at the gentry who insist that universal television is just around the comer. According to Brother Denison effective television is several corners away, and in some respects might be described as a foundling still seeking a doorstep capable of supporting it.

QTo all our readers; to our contributors, colleagues, advertisers, critics; to all Canadians in uniform, wherever they may be: Greetings. May your hopes for Christmas 1944 be realized beyond measure. 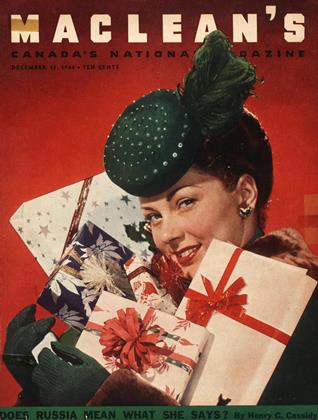