THE ranging tank columns and the sprawling mobile warfare of modern invasion have replaced the static trench battles of World War I. Present-day armies fight in three dimensions, where their fathers fought in two; cubic warfare creates new conditions and sets new problems. And the parachute surgeon, the Royal Army Medical Corps doctor who drops to his job, often miles ahead of the attacking troops whom he will shortly be tending, was a logical and inevitable product of present conditions.

He made his first appearance in the African campaign when the first parachute field ambulance surgical unit, as they call it, landed behind the German lines at Béja in Tunisia. It was part of the force of paratroops which dropped there on Nov. 16, after a flight of more than 350 miles, and captured the town in advance of the oncoming British forces. The flying field ambulance, although part of the RAMC, was attached to the air-borne shock troops; it was the first of its kind. Today there are many such units, and many RAMC men who proudly wear the cherry-colored beret of the parachute fighters.

A few days after that unit dropped behind Béja it was announced that Lieutenant Charles Granville Robb was the first paratroop doctor to win the Military Cross. It appeared that Robb, who bailed out from his special plane according to plan, landed very heavily and fractured his shinbone, actually ramming the bone into the kneecap. Yet despite this he supervised the assembling of the surgical unit and actually began operating within a few minutes of landing.

In all, he and his men performed 160 operations: on Germans who were

taken prisoner by the paratroops, on native air raid casualties, of which there were many, and on the British. AH the while his unit was under fire from the air. But Robb himself set the

example by standing at his operating j table, periodically drawing the fluid j off his swollen knee and giving himself injections.

Since then the paratroop surgeons have become a small, specialized group in the giant Army medical machine; where the air-borne shock troops go, their doctors go. The flying surgeon is no longer a novelty; his appearance is taken for granted by the spearhead fighters whom he tends. Young, and tough, and fighting fit, like the men he is looking after, he is an indispensable part of cubic warfare.

The flying surgeon’s unit, the parachute field ambulance surgery, usually consists of one doctor and five noncommissioned officers; they are provided with a special plane from which I they descend, and which accompanies j the transports which are carrying the main air-borne forces.

The surgeon in charge is responsible for seeing that all necessary equipment is properly packed in special containers, and is loaded into the plane—some of the equipment being fitted with separate parachutes, so that it is tipped out and falls on its own, other material being brought down by the medical orderly as he jumps himself.

The packages vary from complete stretchers and other cumbersome “props” down to tubes of sulphanilamide or morphia. All drugs and instruments are packed in special cases designed to protect them against shock on impact as far as1 possible, while sterilized drums of bandages and dressings are also stored in special containers. Great care, obviously, has to be taken with vital drugs like pentothal, sulphanilamide, chloroform, and so on, and the flying surgeon w’ill watch them being packed and repacked if they are not being loaded from their original containers sent out from Britain. Apparently trivial things like clips and safety pins must be carefully ticked off on the lists, and everything

done to see that the flying hospital arrives over its target with a complete stock sheet.

The drop itself, of course, is no different from any other; the flying surgeon is as fit as any of the men he is supporting, as highly trained, as tough mentally and physically. The NCO’s under him hurl themselves downward with no more concern than the men of the paratroops themselves.

The difficulty starts after the unit has descended, when they face the tricky task of assembling the containers at some agreed point, possibly a few miles away if they have drifted in the wind coming down. And all this time they are very likely under fire. It is the flying surgeon’s job to supervise this assembly, and to arrange the setting up of the scratch ambulance post on the spot.

Material that has been tight-packed has to be taken out and arranged; sheeting and surgical furniture has to be put together from the different containers; a complete field ambulance has to be run up, with an eye to indirect things like lighting for the operating table after sundown, and so on.

Then, with a primus stove being pumped up to keep his instruments sterilized, with surgical kit consisting probably of a rubber apron over a pair of battledress trousers, with an orderly brewing up tea at odd hours against the strain of the nonstop work, with one man helping him on the bandages and another keeping an eye on the instruments the flying surgeon gets down to the job and operates.

Although the situation is possibly desperate, although the unit is miles out beyond the front, in enemy territory, supported only by the thin line of the parachutists with whom they descended, every law of operating theatre hygiene is observed; the bombing and the battle outside are ignored; the job on the table is the only one which matters.

The parachute surgeon is no longer the only doctor who goes by air, of course; the close co-operation between the Allied armies in the Mediterranean theatre have produced other examples.

The most famous of these was the case of the complete hospital, with equipment and staff, which the RAMC flew to the Americans in Tunisia in an emergency when an unexpectedly severe battle had produced an abnormally high number of casualties. On that occasion 200 beds, full equipment amounting to more than 100 tons, and 100 special personnel were all flown to the base behind the American lines, and the hospital was set up and running in a single day.

Letters from troops, sailors and fliers tell how much they enjoy seeing Maclean’s. If when finished with ycur copy you take it to the Active Service ¡Magazine Depot in your city or to a Navy League branch, it will be sent to the boys in uniform here and overseas and to men on the merchant ships. If there are no depots near you write to Active Service Magazine Depot, 122 King Street West. Toronto, or to Navy League Magazine Depot, 1193 Bay St.. Toronto. Or give your old copies to a salvage organization. Paper is needed in the war effort. Do not burn or destroy it. 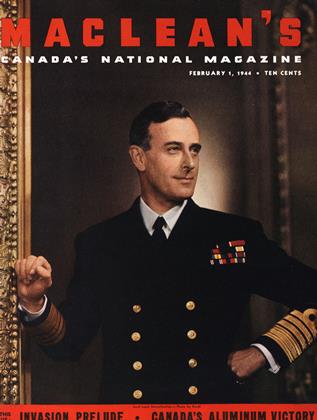