FLEAS has a use,” said the late Huey P. Long one day. “They keep the dog awake.” You might say the same for that form of political wisecrackery that occasionally brightens the rather dreary pages of our Parliamentary Hansard.

The humor of the Canadian Parliament, as the lady said of Punch, seems not as good as it used to be. But, as the editor of Punch replied, it probably never was. Our Canadian legislators seem to fall short of the bright toughness of British musketry in Westminster and the slangy saltiness of American campaigners.

Would a Canadian have made Harold L. Ickes’ observation that “Dewey has thrown his diaper into the ring”? Would a Canadian have withered Stanley Baldwin as did Mr. Churchill: “Baldwin had the habit of occasionally stumbling over the truth and then picking himself up and going on again as if nothing had happened”? Would Canadians forget their respect for the dead as did Dorothy Parker when on being told that Calvin Coolidge was dead she asked quickly: “How can they tell?”

Mind you I don’t pretend to have heard all our parliamentary humor, though in recent years I’ve heard my share of it from the Press Gallery. But there’s a Mr. H. D. Throop in the Parliamentary Library who has been keeping a scrapbook for 30 years and he’s allowed me to go through it. From Sir John A. Macdonald to the present—with side excursions into other countries Mr. Throop has clipped and pasted. He’s got everything in this huge book, from purple passages to a Parliamentary Guide that listed Mackenzie King as a Conservative. But Mr. Throop has a roguish sort of humor himself and he seems to have kept a sharp eye for Canada’s legislatorial quips. Some of them are so bad that he can only have put them in out of mischief. The worst we’ll get over with quickly: William Duff’s assertion that Meighen was Meighen by name and nature.

For the Olympian touch, of course, there’s always Viscount Bennett: “I shall listen indeed with gratitude and interest to the explanation of the Minister of Labor. I am sure it will do justice to his imagination if it is an explanation, but it will do violence to the facts if it is a record of what has occurred.”

But the mighty Bennett had to receive as well as give. Away back in 1913 Dr. Michael Clark followed a Bennett speech in this manner: “I cannot recollect that I ever had to

speak in answer to a speech which ended with a peroration of one hour’s duration, and having passed through this formidable and new experience I am sure I may very sincerely cast myself upon the sympathy of the House.” More recently the quick-firing “Chubby” Power declared that Mr. Bennett “often exhibits the manners of a Chicago policeman and the temperament of a Hollywood actor.”

Mr. Throop has a variety of bits and pieces which may be loosely termed definitions and which if we resurrect them here may well start their rounds all over again.

“A demagogue,” said one gentleman, “is a man who can rock the boat himself and persuade everybody that there’s a terrible storm at sea.”

“An expert,” said L. A. Mutch, Winnipeg, “is somebody who is a considerable distance away from home. I come from the West, where we believe that an expert is somebody in Montreal or Toronto who knows somebody in Ottawa.”

“A politician has three hats,” said another gentleman, “so that he can cover his head with one, throw another into the ring and talk through the third.”

“It is true,” said J. W. Edwards, Kingston, “that I referred to the press gallery reporters as immature and to the condition of their grey matter as half-baked, but I protest most strongly against being accused of saying that they were half paid. I made no reference whatever to their pay but whatever the amount may be it would, in my opinion, be excessive.”

“It was a democratic principle of this country,” declared A. W. Neill, Vancouver Island, “that if a sufficient number of people wanted a thing and pressed for it, they would get it. If not it ceased to be democracy and became demockery.”

“Always it is the same thing,” said R. J. Deachman, North Huron. “More money; scrip! They are the scrip tease artists of Canadian politics. But all this scrip teasing never eventuates in anything.”

moment. I have learned that when a lawyer is faced with a question he does not want to answer, he always says he will come to that in a moment, and I am learning from the lawyers.”

Sir John A. Macdonald on stone throwers: “If you want to find the best apple tree you do not need to look at the branches. Find the tree with the most stones lying under it.”

Sir George Foster on politicians: “Some ‘oiled and curl’d Assyrian bull, smelling of musk and insolence,’comes down into the rural neighborhood and, by chance, shines on the horizon of the innocent and guileless girl. He pays her attention, gets into her good graces, makes her believe he loves her, promises marriage, and under that promise robs her of her virtue.”

As everybody knows, the privileges of being a Member of Parliament fall short of allowing him to call his colleagues whatever comes into his head. There are several ways of skinning a skunk, however.

“I am not expert,” said Charles Dunning one time, “at conveying my thoughts, which may be unparliamentary in themselves, in language which is parliamentary.” That was his reply to the Speaker when asked to

withdraw—but the withdrawal was patently only skin-deep.

William Duff, the hearty skipper from Lunenburg, N.S., had another way. “Well,” he once remarked, “I have to take his word, but if he were outside the precincts of this House I would say he did not know what he was talking about.”

Mr. Throop has some nice side stories about politicians we all know. There’s the one on Toronto’s Tommy Church who prides himself on his memory for names and things. At the ceremony of the unveiling of the National Memorial, amid dense crowds, the irrepressible Mr. Church encountered another M.P. who, in the mob, had become separated from his wife.

“I’m quite distressed,” the member told Mr. Church. “Do you know that I’ve lost my wife.”

“I do know it,” said Mr. Church, “and I was never so sorry to learn anything. I wrote you a letter this morning telling you how badly I felt about your bereavement.”

One that Mitchell Hepburn tells on himself is about his visit to a South Elgin farm after his 1934 victory at the polls. Many Grits had gathered to cheer his speech. As there was no platform he mounted an empty manure spreader.

“First time I’ve been on a Tory platform,” said Mitch. But as the Grits were killing themselves laughing at this quip a voice from the rear called out: “Throw her into high, Mitch— she’s got the biggest load on now she’ll ever have.”

Viscount Bennett and Montreal’s Sam Jacobs figure in this one. R.B. was interrupted by Jacobs, and gave him a lecture. Jacobs sent over a note by a page: “Why do the heathen rage and imagine vain things?” and then left the Chamber. When Jacobs came back he found a note from Bennett on his desk: “The wicked flee when no

The present Minister of Agriculture, James Gardiner, said he brought back his air raid ear muffs from London to use in the House of Commons. This is a new way of saying what wags have been saying for years. The oldest version is of the reporter coming out of the Chamber who told another reporter he had just been listening to one gent speaking for a solid hour. “What was he talking about?” asked his colleague. “I don’t know,” came the reply, “he didn’t say.”

For one reason or another there are few cracks in Mr. Throop’s scrapbook about Mackenzie King, either flattering or critical.* Perhaps the most characteristic story about the Prime Minister, however, reveals him balancing nations with that care that delights his supporters and throws his critics into laughter. The dispatch is from London.

“While molten metal poured at Croydon today for one of the bells of the carillon to be erected in the tower of the House of Commons at Ottawa, Premier Mackenzie King cast in a Canadian cent bearing a date of the Laurier regime. The Canadian Prime Minister stood watching the running metal for a moment and then, as if in afterthought, took an English halfpenny from his pocket.

“ ‘Equal status,’ he said, throwing the English coin in too.”

But for the last we have saved what we believe the cream of the crop, a clipping from the Ottawa Free Press written by H. F. Gadsby, Feb. 15, 1912.

“It was a blazing hot July afternoon. The House was in session. A. C. Campbell was the Hansard man on the floor. Suddenly there was a great clatter in

the glass ceiling whose function is to give light to the green chamber and coolness in summer. A large graniteware pail, followed by two 10-pound chunks of ice and a quantity of shattered glass, came through the skylight. The man carrying the pail of ice stuck halfway through the skylight like an incomplete angel. ‘Come in,’ said big Duncan Fraser of Guysboro. Slowly the iceman drew himself back. More broken glass

showered down, cutting Meggs of Missisquoi about the hand. Parliament was full of blood and wounds and excitement, but Campbell kept right on shorthanding. He took down the exclamations. But afterward in Hansard he boiled it down to three lines nonpareil which said: ‘At this stage the speaker was interrupted by a graniteware pail and 20 pounds of ice falling through the ceiling. Half a man made a motion to come through also, but the motion was withdrawn.’ ” 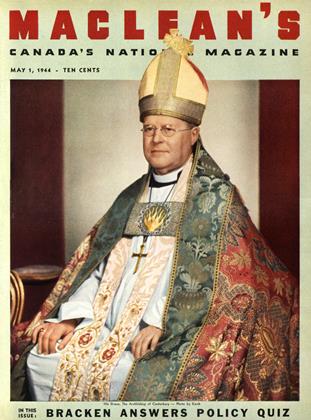