ON MAY 25, 1943, nino days after the fall of Tunisia, little groups of men walked leisurely through the central square of a certain city in France. The city cannot now be named; one day its identity will be trumpeted to the world and all France will pay it homage. These men strolled aimlessly in the bright afternoon sun. They moved out of the square in different directions, and the German guards standing over permanent machine-gun emplacements regarded them only with passing curiosity. They were weak men, looking old and exceedingly bent.

Once out of the square, the different groups walked quickly toward a rendezvous. They converged on a substantial house not far from the centre of the city. The door opened silently to admit them—first three of them, then five, then by twos -until 16 were inside. The door was shut and barricaded. On a radius of 300 yards around the house, other men, also looking old and bent, took up positions overlooking intersections and all approaches. Under their baggy jackets they gripped tommy guns; their pockets held grenades. They were the sworn guardians of the house on this sun-swept afternoon. If a German raiding party appeared, they had vowed to fight to the death. They were defending something more precious than life, much more precious. The future and freedom of France!

Inside the house the 16 men threw off their bent and weary attitudes. As they gathered around a table they were proud and incisive Frenchmen-delegates of the 16 proved resistance movements inside the country—and they were come together to form the Council of Resistance. They were the shadow government of vrance and their program was unity and coordination in the fight against the invader.

These three were already united under title of Le Mur (Mouvements Unis de la Resistance). One delegate each came from six political parties maintaining active resistance movements. These were the Communists,

For more than 12 hours the delegates discussed their respective programs. They set up a central organization to command the underground everywhere in France. They appointed military men to organize the armies of resistance within France in preparation for I lie day when the Allies would storm the shores of western Europe. They sent delegates to London and to Algiers. They drafted a constitution for the Council of Resistance.

Just before dawn on May 26, 1943, their work was complete. In small groups they crept out of the house and disappeared into the darkness. The men standing guard trudged away to their homes And when first light broke over the spring fields a nation was reborn.

The sun rose on a united France, alive and defiant.

United by this historic meeting the French underground movement is today a disciplined and co-ordinated section of General de Gaulle’s forces of liberation.

No longer do French patriots organize acts of sabotage on a whim or an emotion. No longer do underground newspapers circulate confusing policies among the people. No longer do groups of guerillas engage Germans without plan and purpose. France is now systematically being made ready for the great day. Under the noses of the Germans the nation seethes with preparation—calm and ordered and painstaking preparation.

In London and in Algiers there are huge bureaus in constant touch with the responsible leaders of the French underground. Communication is constant and dependable. When one has spent some days with French authorities in London, it comes hard to believe that France is still in the grip of the enemy. They speak knowingly of the weather in Paris, or complain that the aperitifs in Lyons are not what

they used to be. One may read papers fresh off' the secret presses of France.

How many active members of the underground are operating in France is, of course, a secret. For practical purposes all the French people are in the underground. The few thousand traitors still wedded to Vichy are known and recorded.

How much can the Allies depend on the

French people when the day of assault dawns?

A high French official received the question with a grim smile.

“The people of France are ready the moment the Allies are ready. What the Germans will experience far behind the beaches is something I do not propose to tell them. But I will say this: No excitable and careless uprising will take place. The whole affair will be conducted along military lines planned long in advance. We have left nothing to chance.

UNTIL the meeting of May 25, 1943, the resistance movement in France was a haphazard affair lacking recruits and cohesion, teeming with distrust and treachery, confounded by Vichy and localized by unceasing German vigilance. Men without hope can do nothing but submit or die, and France saw little hope in 1940 and 1941. The majority submitted either to German occupation in the north or to Pétain’s blandishments in the south. Eighty thousand died, taking a glorious defiance with them to the execution wall.

The bitter fact is that in 1940 France was illprepared for war and ill-prepared for underground resistance.When the Germans swept through France in June, 1940, the spirit of the nation was but a fading flicker. Years of graft, political intrigue and secure living had robbed the French people of the spirit of sacrifice. They wept when squareheaded young Germans thronged Place de la Concorde, and weeping is but a step toward submission.

The first serious resistance organization was launched by the Communists. Long accustomed to underground work, even in the days of French freedom, the Communists were first in the field. In August, 1940, the Communist underground newspaper, l’Humanité, had a circulation of 10,000 in the occupied zone. And for many months this paper kept alive the flickering hopes of the people. The Communists organized the first sabotage in Paris factories in September, 1940, and the first sizeable strikes later that autumn.

During 1941 the underground movement consisted of small groups of ardent patriots of almost negligible military significance. But the underground press was beginning to make progress. La Voix du Nord, the biggest paper in the Paris district, attained a circulation of 10,000 sheets twice a month, and by the end of the year five other secret publications were moving from hand to hand in occupied France. Hope among the people was maintained by the printed word and by frequent visits of De Gaulle agents. Sabotage increased slightly and Marshal Pétain began to lose his legendary power among the masses of France.

The first huge increase in underground activity occurred in December, 1941, when the United States came into the war. For the first time the French people knew real hope of eventual salvation. Circulation of underground papers boomed. La Voix du

Nord was printing 20,000 sheets twice a month, and a new underground paper in the Vichy zone, Libération, quickly grew to 10,000 per week and was read by an estimated half million Frenchmen. De Gaulle agents redoubled their activity, feeling instinctively that the spirit of French resistance was crystallizing fast.

In June, 1942, De Gaulle took the first step toward uniting all French underground movements. He issued a manifesto, which was published in all eight resistance papers, calling for active participation of the people of France in the battle against the Germans. He also advised caution and preparation rather than blatant resistance. This was necessary because 500 impatient Frenchmen lost their lives during the British raid on St. Nazaire. They believed the hour of liberation at hand and had joined in the fighting. De Gaulle’s warning had its effect at Dieppe. Only 12 Frenchmen were killed when the Canadians stormed Dieppe on Aug. 19, 1942. On that occasion Hitler paid special tribute to the people of Dieppe, preferring to ignore the known fact that the townsfolk of Dieppe were passive on instructions from De Gaulle.

In October, 1942, the spirit of liberation in France was a steady throb. General Stuelpnagel knew this and he turned the German rack viciously. Hostages were shot in every city of France. Able-bodied men were packed into cattle cars and taken to Germany. But Stuelpnagel could not stem the tide of resistance. The iron of bitterness had crept into the hearts of Frenchmen. No German was safe on a Paris street at night. No railway was secure unless patrolled. Otto Abetz, German gauleiter in Paris, appealed to Pétain. The old man was helpless. His quavering voice was unheard by the people of France; they were listening to De Gaulle.

In November, 1942, British and American armies struck in French North Africa. Hitler countered this thrust by sending his occupation armies over the line of demarcation. All of France was now in the German grip.

The reaction of the people of France was immediate. The various independent underground organizations became in effect a national movement. All the people, with the exception of a few thousands, sworn to the Vichy policy of collaboration, became active members or sympathizers of the resistance. And the first open-armed rebellion against the occupation was born in the fastnesses of Haute-Savoie and the central mountains. The “Maquis” were on the march.

Maquis is a Corsican word meaning woods. When a hot-blooded Corsican killed a rival in love or business, he fled to the impenetrable forests of the interior and became known as a Maquis. And when thousands of immobilized French soldiers, threatened with deportation to Germany, fled to the mountains, they became known as Maquis. By the end of 1942 there were hundreds of Maquis in two areas — the Haute-Savoie and the mountains southwest of Lyons. By the spring of 1943 the Maquis were numbered in the thousands. They have been slowly gathering arms and ammunition. Today they are a part of De Gaulle’s armies.

The Germans have made ambitious attempts to crush the Maquis. In September, 1943, a force of 6,000

troops marched into the central mountains. A month later the force came out of the mountains having lost nearly 1,000 men and much of its equipment. The Maquis were more strongly entrenched than ever.

There is now the closest liaison between De Gaulle and the Maquis’ commanders. The Army within France has been ready since February of this year to break out of the mountains when the time comes. Its strength is

unknown except to the Allied high command. Its armament is steadily increasing. Its esprit de corps is high. There is, in fact, a ready-made bridgehead deep within France. Until they are given the signal for the liberation of their country, the Maquis operate in groups of 60 men. They make raids on German communications and supply dumps. They control many towns and villages in France. They are the only free men within the fortress of slavery. 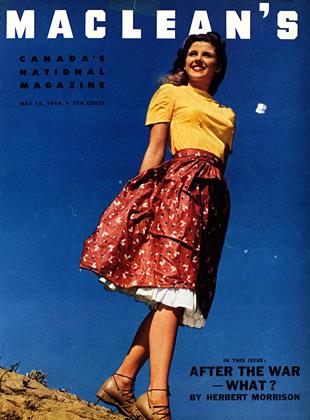