Meet Victor Crich. His skill at shooting birds with a camera has won him acclaim in Canada and abroad

FIVE YEARS ago Ornithologist Wilfred Victor Crich bought his first camera to record the appearance and habits of the birds he’d been studying for 20 years. Today he’s still fond of birds —they’re photogenic and, unlike people, demand no flattery from the photographer—but the love of his life is his camera. “I eat, sleep and think photography,” he says, and with Victor Crich this is almost literally true. He devotes five evenings a week to his hobby, two of them to teaching photography to approximately the largest night school enrolment of students in any class in Toronto’s Northern Vocational school. He spends holidays and week ends taking the bird pictures that have made him probably the best-known nature photographer in Canada.

His pictures, besides being a regular Saturday feature of a Toronto newspaper, were exhibited for two months last year in a London, Ont., gallery, have been shown in the United States and England and won him the Cleveland Grand trophy for the best pictures in the Bird Salon in last December’s show. They have

won him a fellowship in the Royal Society for his distinction in that particular field and he is one of seven Canadian photographers, of whom Karsh of Ottawa is another, entitled to put the letters F.R.P.S. after his name.

In appearance there is nothing about Victor Crich either of the long-haired artist or the confirmed nature lover. He looks like what he is in practical life—a schoolteacher who is still a student. His jubilee name, “Victor,” and the fact that he wears a service button from the last war place him somewhere in his middle forties but Vic Crich looks younger. His wiry fair hair is still all there and has no grey in it. His grey-blue eyes are clear and sharp, with a few fine wrinkles at the corners. A small nose, a full lower lip and a scarcely perceptible dimple in his chin give a perpetually boyish cast to his features, while climbing trees and walking cross-country have kept him lean and fit.

As a schoolteacher, Crich’s subjects are scientific —geography one year, chemistry the next, electricity to the Navy. To photography he brings the same turn of mind. With him it’s more of a science than an art, more hard work than genius. He claims to have no way with wild life, simply an interest in it that dates back to when he was a boy in Clinton, Ont., where he

was born. “In those days I used to hunt,” he recalls. “At 16 I enlisted and went overseas. That seemed to take the urge to hunt out of me.” Today he takes a dark view of falconers, farmers who through ignorance shoot nondestructive birds, and egg collectors who deplete bird life.

HIS attitude to birds is that “they’re fascinating when you get to know them”; that “they’re individuals like people.” They also have the advantage of being a year-round outdoor interest and are not

seasonal like flowers and plants. His bird studies, which have the fresh, quickly caught charm of sudden discoveries, actually are the result of hard, patient work, some of them taking as long as three years to achieve. His bird-seeking expeditions have nothing of the wild-goose chase about them. Photographer Crich knows where the birds are and goes after them and according to him there is no guessing, very little happy accident in taking bird photographs.

Each autumn he lays his plans: makes a list of the birds he hasn’t got and the locality in which he’s likely to find them. When the leaves are gone he sets out, taking his packsack and climbing irons, to find their nests, notes the location of those he wants to come back to later on. Occasionally suspicious farmers report him and game wardens come after him, but so far he’s been able to keep out of jail.

Photographer Crich is not content with one photograph of a species. He wants the nest and eggs, both parents, the young in various stages and flight pictures of the whole family. To do this he frequently makes five or six trips to a single nest over a period of weeks, beginning “when the eggs are just ready to pip,” because the bird loses its fear instinct at that time. “If I miss,” he says, “I have to wait another year.” Missing is usually a matter of hard luck, for his most careful preparations may come to nothing because a bird gets coy and pulls a branch over its face.

The main preparation is what he calls “building a blind,” or hide-out, designed for a close view of the bird to be photographed. This may be built on the ground or 65 feet up in the crotch of a tree, is frequently a concoction of nature-blending brownand-green burlap overlaid with branches. Sometimes when the quarry is a field or shore bird Photographer Crich uses a pup tent or hurdles banked with bullrushes or grain. When he’s lucky he finds a natural blind, which is best of all and can be used immediately without waiting till the bird becomes accustomed to it.

Besides knowing where, Photographer Crich knows when to get the bird he’s after and meets his migratory subjects with the promptness of a man meeting a friend at the train. The males, he will tell you, arrive two weeks before their mates, sit on a high perch and sing, warning the others that this is their territory—the number of miles of woods and water they need for subsistence. Two weeks later Crich goes back, conceals himself in a hide, watches the bird go back and forth with building material or worms and finds a nest. If the bird eludes him he attracts it by making a sound like a young bird in distress, by kissing the back of his hand or whistling through his knuckles. Apart from that he denies any knowledge of birdcalls, any Indian talents for creeping through the woods on silent feet.

HIS kit consists of ordinary rough outing clothes and packsack, with the addition of linesman’s spurs for climbing trees, waders for water-birding, and in winter snowshoes. For his camera he has a variety of tree clamps and electrical extensions and releases, mostly invented by himself because no one else has bothered to do it. The big part of his job is waiting, frequently for hours, in the blind, halfsuffocated by the heat and covered with mosquitoes to which he’s become mercifully insensible.

Occasionally Photographer Crich takes along some of his students and one year two of them exhibited at the Royal Ontario Museum. Mostly he

prefers to travel alone as the presence of another person is apt to spoil his chances for a picture. This happened two years ago when he travelled more than 100 miles to Huntsville, Ont., to photograph a loon. He was up to his armpits in water almost within focusing distance of his birds when suddenly they were off, frightened by the man behind him who was swatting mosquitoes.

If he misses out on one trip Photographer Crich goes back again and again. For three seasons he made the trip to Huntsville in an attempt to photograph the rare slate-blue duck hawk. Each year the pair nested on the same site but their eggs never hatched and the third year both birds were killed by farmers who believed them to be after chickens. One of his most persistent journeyings was to Bonaventure off the Gaspé Peninsula to photograph the gannet. The first time he slipped on the rocks and smashed his camera, the next his camera got away from him and dropped down a 600-foot cliff, but the third year he got the gannet.

These days Victor Crich can’t travel as far but there are plenty of birds to keep him occupied within a 30-mile radius of the city of Toronto where he lives. One year he found a short-eared owl up in Armour Heights, North Toronto—the only owl to nest on the ground and the first of the species to be found in the district. In his own back garden he keeps a feeding station filled with suet to attract the birds and made to revolve to keep away starlings and sparrows. Suet, he says, is a favorite food with a great variety of birds and he takes it along as a lure on his photographing expeditions. One of his stunts is to focus his camera on a pine cone, or some other natural object, then toss suet at it in the hope the bird will come to eat and be in full view of the camera. Now and then the lures fail and Photographer Crich gets his pictures by a fluke. This happened when he went up to Aurora, Ont., after the Canada jay. All morning he waited in the blind, at noon ate his lunch and in disgust threw a crust at the baited pine cone. The jay which had ignored the tempting suet swooped down on the crust and the picture was made.

The camera Photographer Crich uses is a Speed Graphic, with double-extension bellows for close focusing, a variety of speeds and shutter openings and flash equipment for the deep woods. He has his own darkroom, does his own processing and retouching and enlarges his 3x4 pictures to an exhibition size of 14 x 17. His preference is for black and white as against color and so far he has not attempted movies.

After the last war he attended the Ontario College of Education, was principal of a school at Gore Bay, Ont., for four years and took his B.A. extramurally from Queen’s. Now he lives in Toronto with his wife and two pretty daughters who are students at the University of Toronto. The family, he says, are interested in birds as his hobby but haven’t the urge to follow it themselves.

Although birds are still his first interest—he has an extensive library on them and is a member of the Toronto Ornithological Club—Crich is being tempted to other fields of photography. P'rom bird pictures he has taken naturally to photographing fish, silver fox and other animals for trade journals. He has done several distinctive character studies, some of which have appeared on calendars. He enjoys character studies and intends to go on with them “because I’m getting too old to climb trees,” but vows he will never do portrait work, especially where women are concerned. To remind him that taking portraits of women is not a good thing he keeps one tacked up on the wall of his finishing room. “I did considerable retouching on her,” he explains sadly, “but she hasn’t spoken to me since—says I made her look too old.”—The End 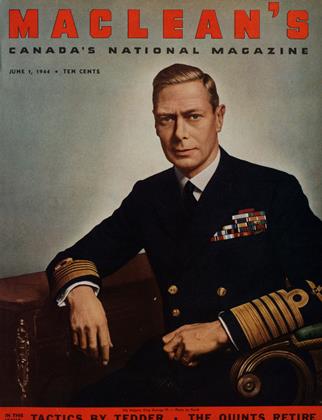