BACKSTAGE AT OTTAWA THE MAN WITH A NOTEBOOK June 15 1944

IT WILL need months, perhaps years, to get the proper perspective of Prime Minister King’s famous speech to the Lords and Commoners in London.

At the moment, because of the shrewd tactics of Progressive Conservative leaders, it is not clear how Mr. King will be able to capitalize on the speech—politically. But undoubtedly there are

great hopes in Liberal breasts that something may be done to build, around the London Conference, a little more appreciation among the rank and file of Canadians of the statesmanlike qualities of their leader.

Mr. King has never been a subject for public acclaim and glamour, but it is clear that since his triumphal return from London he is now ready, poised and waiting for the opportunity to capitalize on the least mistake and slightest misstep of his Opposition in the hope of being somehow swept back into power for the peace-making days which lie ahead.

One competent political observer even suggests that Mr. King may not be above a postelection alliance with the CCF under certain circumstances —and provided always that that Party would be willing.

Remember the happy, fullface darky porter who grinned at you for three weeks during the Sixth Victory Loan campaign? In the background was a soldier boy alighting from a train and hugging his sweetheart. The porter was pointing to the reunited couple and saying that that’s why we should buy bonds—to bring them together again, soon.

Most people rated it the best poster of the campaign. In many war factories it was the only one distributed generally.

But three or four letters reached Ottawa— mostly, we are told, from the Montreal-St. Antoine district, where Canada’s negro population is pretty thick. They raised objection to the singling out of one of their race to do the bond selling job.

Because Ottawa parliamentarians are supersensitive to any criticism these days, there was a

hubbub. Out of it came a letter of apology from Hon. J. L. Usley, which appeared in Montreal papers, and a ruling that the poster be withdrawn from government offices and railway stations. As well, provincial chairmen were notified of the “incident” and told to act accordingly. Most of them (not living in Ottawa’s rarefied atmosphere) did nothing.

The moral is this: we approach the period of pre-election supersensitivity.

Mr. Ilsley came to bat last month with enthusiasm and brilliant argument on behalf of Canada’s banking system. As one observer put it: “The Government has too long been doing its best to appease those who won’t vote for it anyway and alienating the support of those who would have given it support.”

The Finance Minister took his political courage in his hands and reversed the formula of the past few years by delivering a vigorously worded speech in favor of this particular form of private enterprise. He suffered scorn at the hand of Richard Burpee Hanson in the Commons shortly afterward, but he started what many people here expect may be a new trend so far as the two “old” Parties are concerned, namely a stiffening attitude in speech and action toward individual initiative and enterprise.

How far the trend will go may depend in large measure on what happens in the Saskatchewan election this month. It will take much courage— more courage, in fact, than many Government spokesmen seem to now possess—to buck any overwhelming CCF victory at the Saskatchewan polls.

We went the other day to see how William J. Davis was getting along in his new job of firing Ottawa’s noonday gun. The answer was “Very well, thank you.” Mr. Davis this year replaced Ernest Snowdon who had been firing “Old Chum” punctiliously for the past 40 years. Mr. Snowdon, as nearly as we can figure, must have fired this famous 129-year-old cannon some 14,668 times in his 40 years of service. The gun is fired at 12 noon on weekdays; 10 a.m. on Sundays and holidays, and three times on Armistice Day. Twenty ounces of black gunpowder are rammed down the barrel and touched off by a spark. The pay is $150 a year (plus cost-of-living bonus).

Three generations of the Davis family have worked in Ottawa’s Major Hill Park (where the gun is located). William Davis himself has been foreman of the park for the past 10 years and a park attendant for 33 years. His father was similarly employed for 55 years.

“Old Chum,” by the way, was made in 1815, brought from England in 1867, and used first by the Post Office Department as a signal for letter carriers to start their rounds.

Down in the Confederation Block for the past few weeks Mr. Justice Archibald, who replaced Hon. C. P. McTague as chairman of the National War Labor Board, has been wading through the submissions of 100,000 railway employees who want their pay raised to parity with that paid their brethren in the United States. The application started last year under Mr. McTague, but there has been so much preparation that not until May were the briefs, rebuttals and replies actually filed.

Ottawa senses there is going to be trouble over this brief no matter which way the decision goes, unless Mr. Archibald can match the babe-splitting wisdom of a Solomon.

Here is the dilemma: To grant the worker’s request and admit that U. S. wage rates are a valid reason for adjusting Canadian pay would be to undermine the whole wage-price stabilization program. On the other hand, failure to recognize the demands of a powerful, nation-wide group such as the rail workers will almost certainly involve the Government in highly embarrassing political repercussions.

There are many around Ottawa who feel the general approach of the unions at this time is such as to deliberately embarrass the Government. There’s a new steel wage demand which emerged in mid-May from Nova Scotia that gives color to this view, and which, sooner or later, is expected to land squarely and embarrassingly in Ottawa’s lap.

After serving overseas in the last war, Scott Macdonald went to Queen’s University. On graduation in 1927, he entered the first competitive examination to be held for bright young Canadians to enter the Canadian diplomatic service. Under the tutelage of the late Dr. O. D. Skelton, he specialized in tariff and economic questions and served the department in Geneva, Paris and a trade mission to Australia, as well as at the Ottawa Economic Conference of 1932. He was in Paris when France fell; has been Counsellor of the Department of External Affairs at Ottawa for the past two years in charge of the economic division.

He has a passion for trout fishing and playing chess.

Hon. C. D. Howe is seldom at his best when he is on the defensive. This was evident when he tried to meet a House question on his international air policy after Lord Beaverbrook had let the cat out of the bag at London.

Lord Beaverbrook admitted publicly i in mid-May that Britain had got nowhere in discussing with U.S. Government officials a proposal such as Canada rather brashly put forward for an all-powerful international air authority. As a result Canada’s plan was dropped to the bottom of the heap.

The fact is that the brave new air program which Mr. Howe sponsored in the House a few months ago has fared badly both at home and overseas. The domestic proposals for wiping out Canadian Pacific Airlines; handing everything on a platter to the TransCanada; and slapping down all competition as soon as it got out of the “bush operator” stage, have run into steady and increasing opposition—even from sympathetic sources such as the Winnipeg Free Press.

It is rumored around Parliament Hill that the Government would now very much like to find a way out of the decision made very hastily by the Cabinet itself on Mr. Howe’s urging. Just how to get out from under at this stage is not yet clear. 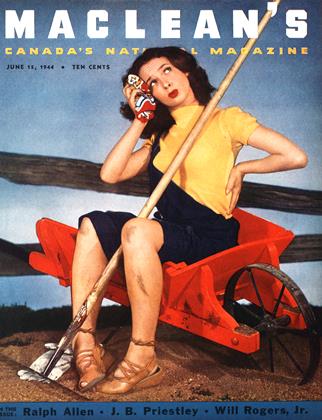