BACKSTAGE AT OTTAWA THE MAN WITH A NOTEBOOK July 1 1944

IT IS a hot day on Parliament Hill. Tempers are beginning to fray; patience is running low. Up speaks a wise and seasoned parliamentarian —Billy Moore, by name—and remarks:

“No one is trying to railroad this Bill. But in European countries democracy lost its life because people talked too much and did too little.”

W. H. “Billy” Moore was speaking as chairman of the Banking and Commerce Committee of the House of Commons. The Committee meets in the large, spacious Railway Committee room on the ground floor of the Parliament Buildings. On the left wall is a vast, 25-foot map of the “Railways of Canada, 1931.” Up front is a raised dais, backed by green leather chairs, in which sit day by day the Minister of Finance; his deputy, Dr. Clifford Clark; Mr. Moore and the various officials and witnesses who are under examination by the members of the Committee. Down below, in long rows, or in a U-shaped well, sit the members of the Committee whose duty it is to probe and dissect the banking system of Canada, and more particularly the detailed amendments to the proposed new Bank Act.

Chiefly because two “free money” Liberals, “Jerry” McGeer and Arthur Slaght, consider this Committee their own personal sounding board for debating monetary theory, weeks went by before the Committee got so much as a chance to discuss detailed amendments to the Act. When one indignant member decided that the two-ring Slaght-McGeer circus had gone on long enough, and accordingly registered a mild protest, Vancouver’s ruddy-faced “Jerry” rose in injured astonishment to protest against the Bill being “railroaded through.” It was then that Chairman Moore spoke his mind about people who “talk too much and do too little.”

By virtue of his Cabinet office, Mr. llsley sits in the centre of this Parliamentary show, his sandy hair habitually tousled and his glasses often propped on his forehead as he listens to the debate. On his right hand is his brilliant deputy, Dr. Clark —endlessly chain-smoking cigarettes from a long black holder. At his left is Chairman Moore— habitually wearing a red bow tie, and smoking either cigar or pipe. Canada’s Inspector General of Banks—a little-known but competent civil servant

Most cool, patient and efficient of all the witnesses who flank these experts is probably Graham Ford Towers, Governor of the Bank of Canada. One day, in desperation, after having tried repeatedly to explain away the McGeer “misconception” about issuance of “free” cash by the Bank of Canada, he blurted out; “I frankly despair of being able to put the facts of the situation in such a way that our minds will meet. I attribute it to some fault in myself because the facts are simple. There must be something wrong with me.”

Most of those who had followed the tortuous debate were unanimously of the view that it was anything but the fault of crystal-minded Governor Towers that the economics of money had become so involved.

Just what will happen before the Committee reports back to Parliament is presently anyone’s guess. Certainly fellow members were getting very tired of hearing the preachments of Slaght and McGeer about the time the June dog days hit Ottawa.

It is perhaps a good sign that Ottawa officialdom is beginning to laugh at the ration story now going the rounds, to the effect that a local gasoline dealer, when confronted with one of the new ration books, remarked to his customer: “Well, so they’re doing these things up in books now.”

Up till recently the black market in gasoline was one of Ottawa’s worst headaches. Now, it is claimed, the worst is over, in part because there are no longer thousands of loose coupons burning holes in gasoline station drawers. (These are now “banked” instead.) Also, because of the new “signed” coupon feature of the 1944 books.

Ottawa promises that from now on there will be much more publicity given the whole oil situation and much more taking the public into the Government’s confidence than has been the case in the past.

“Jimmie” Gardiner got into uncomfortable hot water just before he left to campaign in Saskatchewan.

Anxious to wave a four-year bacon contract before prairie electors, he rushed over to Cabinet one day last May with the proposed draft of an agreement which had been under discussion here in Ottawa since last January. It was found that the proposals hadn’t even gone before the Food Requirements Committee—a top-level clearing house of civil servants who must approve all such documents.

At once the Committee was called into emergency session, but before their comments had had a chance to be studied by Cabinet, “Jimmie” stepped into the House and announced that a “firm” agreement with the British had been negotiated.

Cabinet, we are told, took a very dim view of the Commons getting this information ahead of them. More than that, negotiations with the British hadn’t been completed. Furthermore, the contract which the British are now negotiating with Canada is far from the “firm” four-year commitment which Mr. Gardiner first described to the Commons.

Mr. Gardiner had to retract his statement the next day; had to take train for the West without the completed four-year deal.

One reason the British aren’t too eager to make a firm commitment to buy half a million pounds of Canadian bacon each year through to the end of 1947 is this: they don’t know for sure whether they

Right now it's easy for Britain to buy Canadian bacon because the people of Canada are putting up the money to pay for it. But what is the use of a long-time contract if there are no Canadian dollars in the British till with which to pay for bacon?

Don’t get the idea from anything you hear at Ottawa that health insurance is “just around the corner.” It is no more imminent than a dozen or more legislative social security and other proposals

which can make little or no headway until the Dominion and provinces get some of their differences cleared away at a long-proposed and supposedly forthcoming conference.

When this conference is going to be held, and to what degree it is tied up with another session or Parliament or a federal election is, at this writing, anyone’s guess.

The fact is that in calling such a Conference, Ottawa is very cleverly getting to the root of every forwardlooking postwar undertaking or proposal by asking the provinces very bluntly: “How are we going to maintain employment, income and social security measures after the war?” 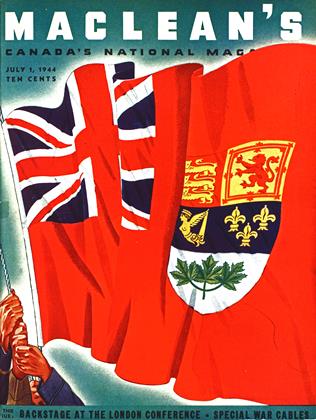