BACKSTAGE AT OTTAWA THE MAN WITH A NOTEBOOK July 15 1944

SMOKE has cleared now from the Saskatchewan election battlefield, and the grass is beginning to sprout through the bare rib bones of Jimmy Gardiner’s shock troops, but memory of that disaster is green in Ottawa. Old-line veterans who straggled back, pale and shaken, in the great Retreat from Regina are still talking in hushed tones of what they went through.

John Diefenbaker, M.P. for Lake Centre and former Conservative Leader in Saskatchewan, went out to the riding of Kerrobert-Kindersley one night to address a rally of Progressive Conservative supporters—at least, that’s what he thought it was. The chairman got up to make a few introductory remarks, and held forth to the general effect that this country needs more farmers in Parliament and fewer lawyers. John Diefenbaker is a lawyer. Someone pulled the chairman’s coattail and reminded him of this fact, whereupon the chairman blandly proceeded:

“Oh, well, we all know John Diefenbaker; he’s an old friend. Matter of fact that’s the only reason I consented to come here as chairman tonight. Personally, I’m going to vote CCF.”

Defeat itself was no surprise to either of the older Parties. The Liberals, who had been pretty cocky up to about June 1, wilted visibly in the closing days of the campaign. As for the Progressive Conservatives, they had never expected anything approaching victory, but some persisted in the idea that their Rupert Ramsay would take anywhere up to a dozen seats, and furthermore that he might well assist the Liberals by taking dissident votes from the CCF.

Failure of both these hopes depressed the Tories considerably. Pessimists began to fear that conservative (small c) backers might swing their weight, both electoral and financial, behind Mackenzie King as the only man in the federal field who has a chance of stopping the Leftward surge. There has been the odd straw already to indicate political breezes from this quarter.

Liberals were equally green at the gills on election night, but they contrive to find a few shreds of comfort. For one thing, the Patterson Government had run its course and outworn its welcome. Then, it was a personal defeat for Hon. Jimmy Gardiner, whose hog subsidy policy alone poured $1,632,417

into Saskatchewan farmers’ pockets in the first four months of this year, and Hon. Jimmy has plenty of enemies. Besides his personal foes there are others, even among Liberals, not sorry to see the Gardiner machine smashed.

But even these cheerier Liberals turn pale when they think of Saskatchewan’s moral effect on Quebec. A strong Liberal argument in Quebec for the federal field has been, “You’d better stay tvith us so French Canadians will be represented on the Government side.” If the Liberals aren’t going to be the Government that argument falls down. Besides there’s a saying among politicians in Quebec: “Jean Baptiste won’t vote to lose.” If

Je;an Baptiste decides, rightly or wrongly, that the Liberals are potential losers it’ll make a big difference in his vote.

technicians in the Civil Service think that no matter when the Family Allowance legislation goes through Parliament it will be physically impossible to start issuing Family Allowance cheques until January at the earliest. Cynics infer that the Government won’t call an election before February, or even March.

On the other hand some people think the forthcoming Dominion-Provincial Conference may give ground for an early appeal to the people. The Federal Government will give this parley a pretty comprehensive statement of intentions, which it will have a better chance of selling if it has a fresh mandate. Also, should the conference be held before the election and fail, the Government would be put on the defensive it’s better platform tactics to tell the people what you plan to do than to give them the reasons why you couldn’t do it.

Some provinces are still being a bit sticky about the conference. They’re all rolling in money just now, and they tend to forget the hard days of the thirties. But those who expect to be poor again — Manitoba, for instance have a somewhat sharper eye on the economic weather than those who can look forward to continued financial comfort.

Ottawa took careful note of the recent speech by Premier Stuart Garson of Manitoba, in which he hinted that unless Canada’s obsolete tax system was straightened out, and the provinces put on a better financial footing, some of them would be forced into a form of Socialism. Mr. Garson noted that the present 40% federal corporations tax gave a beautiful “cushion” to provincially owned enterprises. Tax-free, they would be able to undersell any private enterprise and still take a fat profit out of that 40% which they would not have to pay to Ottawa. It’s one way for any province to pull itself out of the financial doldrums at the expense of the federal treasury. Observers here note especially the vulnerable position of the brewers—most provinces already have a monopoly on the distribution of beer, and what would be more natural than for them to take over the business of brewing it as well?

Ottawa’s worry over what might happen to the federal treasury is offset by hope that this“Socialist ’ threat may stir apprehension in the wealthy provinces, especially Ontario, and induce a more co-operative mood at the conference.

A showdown may be impending in the feud between the Volunteer Reserve and the Permanent Force in the Royal Canadian Navy.

T RCNVR men compose 90% of Canada’s wartime Navy and they feel they have not had a fair share of the honors and awards. By March of this year

36% of all RCN officers had been dfecorated or cited. Only 2.3% of RCNVR men had been similarly honored. More than half as many decorations have gone to the 5% made up of Permanent Force sailors, as have gone to the 90% who make up the Volunteer Reserve (the other 5% is Naval Reserve—former merchant seamen). Fifty-three awards for nonoperational service have been given to Permanent Force men; only 31 to the RCNVR.

RCN men hold nearly all the top jobs. On the Naval Board, highest level of Navy hierarchy, there’s one Volunteer Reserve officer to four RCN men—and even that one was appointed only last January. On the Naval Staff, the next level, the VR has one out of nine posts. Of five operational commands all but one are RCN. Out of 32 department directors 18 are Permanent Force men and only 14 VR’s.

Attention has been focused on these complaints by the failure of the RCN recruiting campaign. Before war its authorized establishment was 3,500. Actual enlistments were less than half that. Today its nominal strength is about 4,000, but this is swollen by inclusion of nursing sisters, chaplains and older officers recalled from retirement. Actual net strength is not much over 2,000. This means the RCN needs about 500 new officers and at least 5,000 ratings to bring its strength up to the 9,000 figure called for by Navy Minister Macdonald. Thus far only about 200 VR’s have volunteered.

VR’s give two reasons for their reluctance to volunteer for the RCN. One is the matter of pay. Navy pay was stepped up to equal that of the Army as a wartime measure, but there has been no assurance, and no official announcement that the raises will carry over into peacetime. Then there is the matter of rank and seniority—a fetish in the Senior Service.

Rules provide that an officer transferring to the RCN must revert to the “confirmed” rank of lieutenant. It is conceivable that a man with five years’ service in the RCNVR and the rank of Commander might go into the RCN with credit for only three years’ service as a lieutenant.

VR’s say the Navy will have to do tw'o things if it really wants permanent recruits. First, stop regarding itself as a club or caste, and accept VR men on a basis of equality. Second, prove this change of heart by deeds—preferably by arranging the transfer of some

Page boys in the House of Commons have been having fun recently putting lighted matches under the copper bar which controls the Chamber’s recording thermometer. This produces neat little hills and valleys on the temperature record, and the boy who spaces his peaks most evenly wins a daily pool— —according to gossip, at least.

Protective staff are powerless to set a watch on the boys, because the protective staff isn’t allowed on the floor of the House, and the boys know it.

Watch for at least two more distinguished recruits to the ranks of Progressive Conservative candidates and brain trusters. One is a prominent financial man, the other an industrialist who held a government wartime administrative post.

One point favoring a fall election hasn’t been mentioned publicly by any Party—and isn’t likely to be. It’s the desirability of having a newly elected Government—regardless of its political color—to face the thorny problem of partial demobilization when Germany folds up, and to deal with the related question of what part, if any, Canada is to play in the Pacific war thereafter.

On paper, it’s obviously desirable that we should do our share toward beating the Jap. But it’s equally obvious that we shan’t need all our six divisions in a war which is likely to be more of a sea and air war than a land war. So the question will be—who is to go to fight in the Pacific?

Men who have spent anywhere from two to five years overseas won’t want to go. They’ll say, “We’ve done our share. Let someone else carry on now while we go back to our homes and our families.” But the only alternative would be to send the Sixth Division, largely composed of “R Recruits,” otherwise known as Zombies. And if it was politically impossible to send these men overseas when Canada was in palpable danger, how shall we do it when the immediate danger has waned? And if we try to evade this dilemma by taking no part in the Pacific, what will the United States think? Plenty of American boys in Europe and North Africa think already that they’re fighting somebody else’s war. If we fail to pull our weight in the area where the U. S. was attacked, we’re not likely to stand high in American regard.

Any way you look at it, it’s a headache. The Cabinet is acutely aware of this, but so far no decisions have been made. 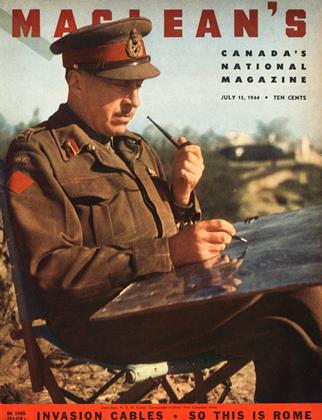