THE Republican National Convention went according to expectation except in two respects. Governor Earl Warren, California, Governor Dewey’s first choice for the vice-presidential nomination, refused to accept it at the last moment, necessitating the substitution of Governor John W. Bricker, Ohio. And the delegates assembled, conferred, and returned to their homes with less confidence in the ability of the Republican ticket to win in November than most Washington observers had expected them to demonstrate, less perhaps than the hard political facts justify.

The electorate of that state is notably independent, and Warren’s election as Governor had been made possible by the support of many voters who in the national arena would follow Roosevelt. Moreover his Republican backers were afraid that if he were elected to the vice-presidency in November they would soon lose the state administration to the Democrats, since they had no other candidate of comparable attractiveness.

In Bricker, Dewey acquired a running mate who is extremely popular with the rank and file of regular Republican politicians, a better speaker than Warren and a man with more natural appeal to the voters of the Middle West. As it became evident at the convention that many of the regular Republicans were not too happy about the nomination of Dewey himself and that several of the Middle Western states, including Ohio, were not to be regarded as securely Republican, the Dewey-Bricker ticket is perhaps a little stronger than the Dewey-Warren ticket would have been.

The unanticipated air of depression which overhung the convention may have been due partly to the debilitating heat which descended on Chicago just at that time. It was due partly to lack of enthusiasm

for Dewey as a man. He was the overwhelming freè choice of the mass of regular Republican party workers. The Old Guard did not want him, although it regarded him as much less objectionable than Wendell Willkie. But it took him because it thought he had a better chance than any other Republican to carry his home state of New York, which is Roosevelt’s home state also. New York is the mast populous state. The Democrats, with a backlog of electoral votes in the South and West, might win a national election without New York, but the Republicans almost certainly cannot win without it.

Dewey’s flight from Albany, N.Y., to Chicago to accept the nomination, after the manner of Franklin D. Roosevelt in 1932, did not lift the convention out of its lethargy. He made a forceful and shrewd speech, but it was addressed to the nation as a whole, which of course was by far the more valuable audience, rather than to the perspiring convention delegates, who yearned for an old-fashioned inspirational address.

HOWEVER the chief depressant, at work on the convention was, I think, the war. The delegates could not calculate its political effects in November, but they knew that with the invasion of France and the series of brilliant successes in the Pacific during

the last few months Roosevelt’s stock had been rising. They felt in their hearts that in the last analyste the nation would decide not “to change horses in midstream.” They would have been far happier if the Constitution had permitted the presidential election to be postponed until 1945 or 1946.

Dewey knows, of course, that the war is the main obstacle to his election—the fear that a change in administration might delay its conclusion. In hifl acceptance speech his most complete and emphatic promise was that if he were elected he would not disturb the military conduct of the war. He, of course, pledged himself to the prosecution of hostilities until both enemies have been completely beaten. Thé Democrats noted with satisfaction that Dewey lauded by name General Marshall, chief of staff of the Army, and Admiral King, commander-in-chief of the Fleet. As they were both hand-picked Roosevelt appointees —Marshall’s promotion in 1939 having been over the head of a flock of senior generals—a handsome compliment to Roosevelt was implied. Moreover, Continued on page 46

although Dewey is trying to capitalize on his comparative youth (42) by attacking the “tired and ageing Administration,” the men whom he thus chose for special endorsement are, respectively, two and four years older than President Roosevelt.

The practice of American party conventions is to write their platform before nominating their candidates. As a result the Republican platform was written largely by Old Guard Republicans under the guidance of Senator Robert Taft, Ohio. It is probably the most elaborate catchall for votes contrived in some three quarters of a century. It caters to every important pressure or specialinterest group in the country, even purporting to outbid Roosevelt for the labor vote; and it faces in all directions on nearly every important national question exeept wartime economic controls. These it simply proposes to abolish, although it does not specify when.

On the organization o the peace, the platform satisfied both the moderate internationalists and the outright isolationists. On the whole, however, it signified u shift in the balance in the Republican Party in the direction of international co-operation. And Dewey unquestionably will try to move the Republicans still farther in that direction, although he has none of Wendell Willkie’s crusading determination, and the reorganization of the party machinery eliminated nearly all the surviving Willkie-ites in prominent positions.

barriers. But he will have difficulty in j stretching the party commitment on ¡ the tariff and if elected certainly will have trouble with the high tariff views which predominate among the members of his party in Congress. (In 1934, 1937 and 1940 the Republicans in i Congress voted almost solidly against the Hull Reciprocal Trade Agreements Act and its renewal.)

In Dewey the Republicans have for the first time a presidential nominee who can compete with Roosevelt’s technique as a speaker over the radio. His voice is too highly trained to please some, his enunciation perhaps too precise. He lacks the warmth of a Roosevelt or a Willkie, but his mind is more exact than theirs. He has been schooling himself in national issues the way he used to prepare his famous prosecutions of New York gangsters. His speeches are more carefully phrased than any that have been heard in most recent presidential campaigns. He has surrounded himself with intelligent, competent advisers on almost every subject from practical politics to the organization of the peace. But he himself has a beautifully organized mind, one of the most accurate mental machines in American public life since Charles E. Hughes retired as Chief Justice of the United States Supreme Court. He will make a smart campaign,

I think. But it may not capture the imagination of the voters.

Result Will Be Close

All current signs point, however, to a j very close result. Assuming that Roosevelt accepts renomination, he probably has a slight advantage at this | stage of the campaign. It would be | greater if anything approximating a I full vote of men in the armed services j were to be cast. But under present j restrictions the service vote will be small.

The Republicans, moreover, possess most of the state and local political machinery, with 26 of the 48 governorships and most of the rural and small town, and many of the city governments outside the South. They have access to plenty of money and, as usual, they have the support of most of the press. In addition, what there is left of the Democratic organization is badly split. The schism between the Southern conservatives and the prolabor, generally more liberal Democrats of the North is wide. Bitter anti-Rooseveltians have seized control of the party machinery in at least three southern states. Roosevelt’s acceptance of renomination is at the risk of defeat in November, evenTthough all current polls give him an edge over Dewey.

The campaign necessarily will be unconventional in many respects. At this writing, the Democrats were planning to write a “postage stamp”

platform. They could not rival the Republicans in multiplicity of promises, even if they wished to do so. And there are some issues, notably the position of the Negro in American life, on which no agreement is possible between the Southern wing of the party and the North. Most important, however, the Democrats wish to focus attention on winning the war and organizing the peace. If the campaign were fought on domestic issues, as the Republicans wish to fight it, the Democrats probably would lose. Roosevelt probably will hold himself aloof from controversies, in so far as possible, while carrying on his duties as Präsident and Commander-in-Chief. He will present himself less as a party leader than as the national war leader.

It will be a campaign without precedents in many respects—and therefore as baffling to seasoned politicians and observers as to rank novices. 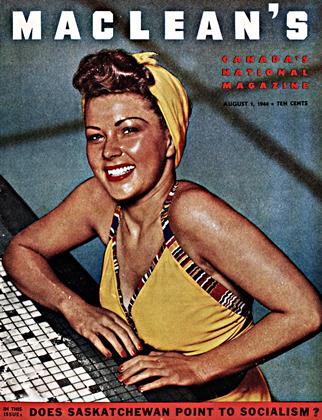