IF YOU had told a Calgary businessman two years ago that he would support Social Credit in the next Alberta election he would have laughed in your face.

Two years ago it was a preposterous suggestion. But after the CCF swept into power in Saskatchewan and threatened to invade Alberta, the choice became one between Socialism or Social Credit and Alberta voters chose the heterodoxy with which they were familiar, with the Social Credit Government of 35year-old Ernest Charles Manning returned for a third term. The Aug. 8 voting gave Social Credit 51 neats. The old-line Parties, Liberals and Conservatives, who united their feeble forces to support candidates running as Independents, won three seats, one Veterans’ candidate was elected and the CCF returned two members ... an increase of 100% over their previous representation.

That, at least, is the way CCF Party apologists attempt to view the dismal results of their effort to extend their Saskatchewan successes to the neighboring western province ... as a 100% increase in strength.

Premier Alanning and his followers raised the slogan:

“Keep Socialism out of Alberta,” and swept back into power on a wave of reaction against the CCF’s threat to move in.

Premier Alanning could have waited until next spring before going to the people. Instead, in another demonstration of the sheer, old-fashioned political agility which has characterized his Party in its eight-year rule of the province, he decided to strike swiftly before the CCF could have time to marshal their forces. He knew, as did everyone else who had paid

issues . . . the war record of the Liberal Government was never mentioned. Instead,

attention to utterances made during the Saskatchewan election, that the CCF invasion was coming. No other Party had a hope of stopping it. The Social Créditera could, and did, by playing up the threat of Socialism for all it was worth and rallying to their support all the anti-CCF strength in the province.

In a way the Alberta election constituted the second defeat of the CCF by Social Credit in the West. The two Parties have fought bitterly ever since they emerged as products of the depression back in the early Thirties. And in 1938, when the CCF was reaching hopefully for the reins of government in Saskatchewan, the late William Aberhart led his Social Credit apostles into the neighboring field to split the “lunatic fringe” vote and ruin the CCF hope. This time the Saskatchewan Socialists had hoped to repay their old grudge by upsetting the Alberta Government. The result was a dismal disappointment.

Other parts of Canada may find it difficult to understand why Social Credit continues to retain such a strong hold on the support of Alberta voters. The original Aberhart promise of $25 a month to everybody for life has become a stale joke, lost in the dimming memories of oldsters who were led eight years ago into believing it actually would be paid. The provincial credit house experiment has been similarly forgotten. And the province, due to Social Credit, remains in the invidious position of a debtor who refuses to pay his debts.

Nevertheless, it was possible for Premier Stuart Garson, Premier of Manitoba, to congratulate Premier Manning on his re-election and to say: “Alberta originally voted for

Most of the flamboyant trappings of Social Credit, the evangelistic fervor of its orators, the wild promises, the fantastic money theories, have been discarded. All that remains is a body of shrewd politicians and able administrators who have proved themselves able to supply improved educational facilities, adequate health measures, encourage agriculture and beat the CCF in the rough-and-tumble of elections.

11 was one of the curious side lights of the campaign that Woodrow Lloyd, CCF Saskatchewan Minister of Education, divided the time of his recent junket into Alberta almost equally between public appeals to throw out the Social Credit Government and private research on the Alberta system of larger units, with a view to introducing the system in his own province.

Internal critics maintain that any benefits to the province produced during the tenure of Social Credit are the work of keymen in the civil service, but the average voter refuses to examine the machinery so closely.

In Alberta it Ls the farmer who makes and breaks governments. He decides the issue in over two thirds of the constituencies. He turned out the Liberals in 1921, and after experimenting with a group government, The United Farmers, for 14 years, decided it had become much too static for the depressed Thirties and turned it out too. The late William Aberhart preached to him in language he thought made sense, just as he had hearkened over a decade earlier to the message of Henry Wise Wood in behalf of strong farm organization and co-operative business. Social Credit looked like the answer to the great depression in those days. Now, to the Alberta farmer it merely represents a government which has had a satisfactory record of administration while still maintaining some claim to “progressive” intentions.

The election itself was unrelieved by any flashes of the old-time missionary spirit of Social Credit. Manning himself set the tone of campaign speeches when he referred to the invading CCF speakers from Saskatchewan as “that bunch of cheap, imported, tinhorn politicians.” One Social Credit candidate bolstered his appeal to his farmer constituents by use of moving picture entertainment, in which the sequences intended to illustrate the Social Credit theory were judiciously interspersed with Mickey Mouse cartoons.

Otherwise the Government candidates stuck to the tactic of slugging the CCF while conveying the impression that other contenders in the election were not worth consideration.

Taken with the results of elections in Quebec and Saskatchewan as a possible indicator of what may be expected when the Dominion election is held, the Alberta election has little significance. Neither Liberals nor Conservatives could take comfort from the results. In their combined efforts to elect Independent candidatas they received only about 15% of the total popular vote as compared with 85% cast for all Parties of an unorthodox hue. The soldier vote showed 18 Social Credit votes for every 11 for the CCF with other Parties trailing far behind. Labor Progressives, former Communists, ran 30 candidates with Tim Buck personally directing the campaign—but elected none.

The only inference which can reasonably be made from the Alberta vote is that Alberta will contribute its quota of Social Crediters to further confuse the situation in the next House of Commons. Everyone lost in Alberta except Social Credit. In the heat of their own oratory Premier Manning and Solon Low, leader of the national Social Credit Party, predicted that their victory in Alberta would add to their Party’s prestige everywhere in Canada and that Social Credit, not the CCF, would emerge as the real dark horse of the forthcoming Dominion election.

“Social Credit will sweep across Canada like a prairie fire before the wind,” said Premier Manning. But nobody in Alberta really expects the local bonfire to go very far. For the majority of voters, both those who supported Manning and the few who registered their objection at the poll, the feeling is that Social Credit is a purely local form of political experimentation that has worked out well enough at home but should not be sent too far abroad. The Alberta farmer does not want state ownership of his property ... just yet, at least... but he is still essentially an experimenter in politics and just as he turned out the United Farmers, after 14 years, in favor of a still more radical set of political theories, his next move may be even farther left toward the CCF.

In the interregnum that was Europe between the Treaty of Versailles and the Polish invasion two peculiar incidents took place.

Incident 1: In 1924 the Russian freighter Aurora, bound from Hamburg to Kronstadt with a load of German chemicals, disappeared into the thin Baltic air. The Russians sent some destroyers looking for her, found her drifting. Her entire crew had been choked to death. Phosgene gas in the cargo had leaked out.

Incident 2: Some years later a young German was paddling a canoe round the canals in suburban Hamburg. Before him, spread out on the water, loomed a wispy fog-like cloud. Paddling a little harder he slid his frail craft into the cloud.

When the canoe came out on the other side the canoeist was ill. Four hours later he was dead. The cloud was poison gas. A phosgene tank in Hamburg’s Stoltzenberg factory had exploded, and that afternoon 11 more people died; 300 lay gasping in Hamburg hospitals.

The city was terrified; firemen and police stopped all traffic toward the suburb of Weddel. Europe screamed; the Treaty of Versailles had been flouted.

Germany was hard put to explain. From Government circles came contradictory comments: (a) the phosgene was stock left over from World War 1; and (b) it had been manufactured for American industrial concerns.

Serene throughout this storm remained grey, cynical scientist Dr. Hugo Stoltzenberg. From his headquarters at 19 Moencheberg Strasse, Hamburg, he has been directing Germany’s poison gas industry since 1923.—News Review. 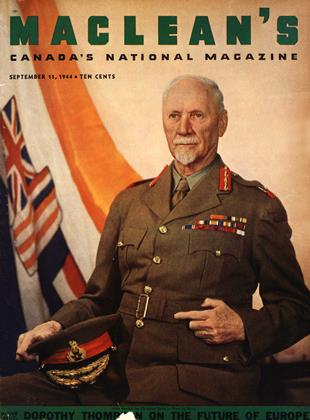