BACKSTAGE AT OTTAWA THE MAN WITH A NOTEBOOK October 1 1945

MAJOR HEDLEY F. BRIDGES, New Brunswick’s new representative as Minister of Fisheries in the reorganized Cabinet, is a newcomer to the general public outside his own province, but Ottawa has had an eye on him since 1938.

At that time Mr. Bridges was Speaker of the New Brunswick Legislature, and Alison Dysart was Premier. The Dysart Government, even though it was Liberal like the Federal, developed sharply autonomous leanings; it seemed to Ottawa that New Brunswick was beginning to behave like a sovereign state. Mr. Bridges seemed to feel the same way. He resigned the Speakership for the express purpose of voicing his opinion of the Dysart Government and its autonomist works, and the opinion turned out to be a low one.

Came the war, and the erstwhile Speaker and political rebel became a soldier. Federal Liberals didn’t forget him, though. Long before the 1945 election—when the Liberals were laying out their first campaign plans, two years or so ago—Bridges was suggested as the man who could beat R. B. Hanson in York-Sunbury. When Mr. Hanson decided to retire, Major Bridges still looked a good bet against General Sansom. Bridges was still overseas, but they sought him out and persuaded him to run.

Meanwhile, it should be added, Premier Dysart had retired-and Premier McNair had taken his place in New Brunswick, and McNair’s provincial machine was at Bridges’ disposal in York-Sunbury.

Altogether, the Cabinet with which Mr. King faces the new Parliament has changed its complexion, and particularly its age, more than more people realize. When war broke out, J. L. Ilsley was regarded as the boy wonder. Now Mr. Ilsley is one of a handful of battle-scarred veterans—and even of that handful, one, Mr. St. Laurent, was a newcomer of 1942.

Looking down the Treasury benches today you see a row of young faces—Doug Abbott,

Brooke Claxton, Lionel Chevrier, Paul Martin. They’re expected to make themselves felt in Government policy over the next four years.

ANOTHER spot in which changes have „ taken place is the oft-forgotten but stillimportant Senate. Senators as a group, regardless of party labels, tend to be more conservative with a small “c” than the Lower House.

It is expected to make a difference, to have vigorous and sympathetic leadership for the Government side in debates on the new program of social legislation.

CURRENT rumblings and stirrings of change in the Veterans’ Affairs Department have a more complex background than you might think. They don’t spring only from the belief that rehabilitation, the year’s biggest job, calls for bigger calibre at the top, there’s also some reason to believe that Ian Mackenzie personally has been in the official doghouse lately. When Mr. King went to San Francisco Mr. Ilsley, the Minister of Finance, was named acting Prime Minister. Not many people thought

of it at the time, but precedent would have given the job to Ian Mackenzie, who was senior Privy Councillor after Senator Crerar left the Cabinet. Mr. Mackenzie, they say, was pretty annoyed at not getting it. In any event he went off on a trip out West and didn’t happen to attend the Cabinet meetings at which Mr. Ilsley presided.

But it was after the election that things really came to a head. Mr. Mackenzie went to Europe on a journey, somewhat vague in purpose, which took him to a great many places. While in the Low Countries he told a press conference that he’d found overseas veterans fed up and disgruntled with the repatriation system. This statement, however true, sounded odd from a Cabinet Minister. They say Mr. King was furious, and ticked off Mr. Mackenzie in no uncertain terms.

Now it looks as if Veterans’ Affairs was headed for change on a considerable scale, and a good many people, especially in the services, think it’s about time. There are good men in the Department but there is a feeling in the capital that things are due for a cleanup, which would clear out the deadwood and give the good men a better chance.

PEOPLE at Ottawa were a bit puzzled by the outbreak of indignation in Britain at the cutting off of Lend-Lease after V-J Day. All Lend-Lease agreements clearly stated that they would terminate with the cessation of hostilities, and whether hostilities officially ceased with the Jap capitulation, or with the formal signing three weeks later, was hardly a major point.

As a matter of fact, our own Mutual Aid stopped at the same time, in the same way, for the same reason.

replace Mutual Aid. They knew Britain would need help, large-scale credits of some kind, and they also knew how worried the British were about repayment. Our White Paper on employment policy, last April, proposed an extraordinarily flexible loan scheme, whereby overseas customer countries would be excused from their repayment installment in any year when their supply of Canadian dollars fell below a certain figure. It was a straight gamble on the restoration of freely moving international trade and Britain’s ability to profit therefrom.

Some Canadians found a considerable reluctance among British officials to talk about postwar credits at all. Canadian suggestions that now would be a good time to discuss the economic arrangements for the postwar were dismissed at least on one or two occasions as premature.

As Ottawa sees it, the sudden ending of the Japanese War simply caught Britain off guard. To some extent, of course, we all were—Washington has been in a tailspin ever since—but the British were caught worst, because peace ended Lend-Lease and Mutual Aid before their Treasury had got around to brass-tack discussions of what was to come next.

In Canada, at any rate, V-J Day found us pretty well prepared on this financial side. Arrangements had already been planned for extending the scope of the External Credits Act, and several big loans had already been negotiated in anticipation of this extension. The Czechs had got one, the French were down for something in the neighborhood of $250 to $300 millions, the Russians were bargaining with their customary toughness for a sizeable slice of business too. Chinese negotiators are talking to Ottawa about purchase of everything from binders to buttonhooks. They want food, ships, clothes, machinery, locomotives, raw materials—there’s practically nothing they don’t want. And although they haven’t any money now, China potentially is one of the world’s best customers, a conviction that’s at the root of Ottawa’s loan policies to all these countries.

It goes without saying the British borrowers would be most welcome of all. People here think that in its own interest this continent will have to supply western, democratic Europe with the necessities of life, and do it fast if the democratic cause and faith are to survive there. Moreover, in a very short time our “scarcity” will be markets, not goods.

As for President Truman’s promptness and bluntness in cutting off the Lend-Lease flow, many in Ottawa believe it will benefit the British in the end.

“Truman’s problem would be Congress,” . one Ottawan said. “If Congressmen found the Lend - Lease agreement had been stretched beyond its terms, they’d be sore. As it is, they find Truman has observed the letter of the bond, hasn’t given away a cent that Congress didn’t authorize him to give. That’ll make his path a lot easier if he comes to Congress later with a loan program to put Britain and Europe back on their feet. Congress will feel it can trust him not to make an Uncle Santa out of Uncle Sam.”

Canada hadn’t the same kind of reason for cutting off Mutual Aid on the day the agreements expired, but we had reasons of our own. One was, we couldn’t afford not to. Too few Canadians seem to realize that in terms of population and national income we’ve given more “Lend-Lease” to our Allies than has the United States. Our total financial aid to Continued on page 65

Britain, including interest-free loans, the “gift billion” that preceded the Mutual Aid Act, and other special arrangements, adds up to $4% billions.

Canadian Mutual Aid has been pure outgo. Except for certain naval vessels that we got from Britain as a gift, with no precise financial value attached, everything we’ve got from the British has been charged against Britain’s cash purchases in this country over and above Mutual Aid.

During the last 23^ years we’ve had nearly $3 billions worth of goods and services from the British—our payments for support of Canadian troops overseas alone came close to $2 billions. But all these amounts have been set off, not against the Mutual Aid account, but against additional British purchases in this country.

We’ve been told we’re to get a credit from France—some goods and services of so far unspecified amount—to balance against the Mutual Aid account, but otherwise the outlay hasn’t been mitigated at all, and it has added up to the biggest single item, perhaps, in our whole war budget. We couldn’t carry on like that for long.

However, the same .machinery of procurement and shipment that handled Mutual Aid is ready to handle the placement of exports on loan arrangements. Neither Europe nor Britain will lack anything Canada can supply.

Recent events make it worth while to recall an incident of February, 1942, when General Andrew McNaughton paid his brief visit to Canada as Commander-in-Chief of the Canadian Army Overseas.

On that trip home the general came face to face with the McNaughton Legend that publicity had built around him. He was shocked. Talking to a friend in Ottawa, he said: “They’ve

built me up too far. I’m up on a pedestal where nobody could keep his balance.

“I’m an engineer and a research man; I can hold my own in that field. I’m a soldier, too, and I know a bit about weapons, especially artillery. But I’m no superman, I’m just an ordinary person with an interest in science and in war.

“They’ve built me up into something that isn’t human at all. I’m in a tremendously vulnerable position. Anybody that’s pushed up so high is liable to come down with a terrible crash when it turns out he’s just a human being.”

Last summer, when he had lost at the polls for the second time, and certain newspapers were throwing every kind of insult at the hero of three years before, the general met the same friend.

“Remember that talk we had in 1942?” McNaughton said. “Well, you see how right I was. Now the chances are they’ll try to do the same thing to Harry Crerar. If ever you hear so much as a whisper in that direction, do anything you can to stop it.” 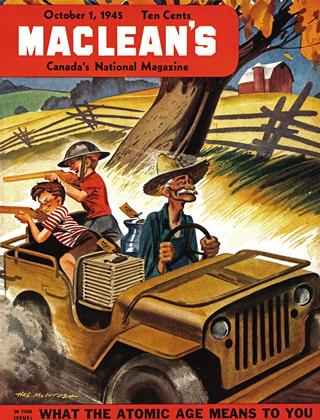