THE heraldry experts at Ottawa would do well to have a chat with Seaman Robert Benjamin, of the cargo ship Westend Park, before they proceed further in choosing a flag for Canada. Months ago, while Capitol Hill was just beginning to chaffer over the merits of beaver rampant against buffalo couchant, maple leaves in argent or vert, the Westend Park was tramping into a United Kingdom port with a new Canadian flag aloft.

“It was a homemade affair,” says Seaman Benjamin, “a blue curtain, 24 ft. long and wide in proportion, with a white canvas maple leaf in the centre. We made it on the way up from Colon after an argument about the flag issue, and we flew it first when we arrived at Newcastle on Tyne. As we passed near two other Park ships in the harbor we explained that it was the new Canadian flag, and their crews cheered it loudly.”

But there were others who failed to cheer, among them the local police, who scrambled on board with threats of a “hundred quid fine” for flying an unauthorized ensign. The Westend Park’s British master disapproved too. Down came the flag—but soon, by processes which Seaman Benjamin doesn’t deta'V it rose triumphantly again.

Before long the town was abuzz with excitement. Some residents approved of the flag, but most were as hostile as the old lady heard to remark, “Can you imagine those colonials flying that rag and claiming it as their national emblem!”

Canadian soldiers in the port thought the flag was swell, though, and on the homeward run through the Panama, American guards sided vigorously with the crew when the illicit banner was run up astern.

“Last time we flew her,” says Seaman Benjamin, “was when we sailed up the Fraser to New Westminster. The design wasn’t beautiful, but to us it was a symbol we’d never had before—our own Canadian flag!”

A hurry call for police assistance came in from a Vancouver office building, and a constable rushed to the scene. Here's his report, straight from the station blotter:

The battle-weary sergeant stood at the rail of the troopship with 13,000

other Canadian soldiers, gazing down at the cheering Haligonians on the

dock. The sergeant had been through Big Blitz and Little Blitz, had hit a Normandy beach on D-Day and come through to V-E Day with never a scratch.

Still scarcely able to credit his luck, he smiled down at the girl below. She threw a bag of candy, gift to a homing hero. It caught the sergeant in the puss and knocked out three front teeth.

We won’t put a name on this southern Ontario town, but it’s deep in the heart of the harness racing country, and the crowd that turns out to watch the trottin’ horses is so large

and enthusiastic that the chief constable swears in extra officers each race day. On the occasion we have in mind an unexpected difficulty arose. One of the lads on the special constable list, call him Mike, had himself fallen foul of the law and was midway through a 30-day stretch in the calaboose. That didn’t stop the chief though.

He had the prisoner released in his custody, bundled him into a police uniform, and turned him loose. Mike patrolled the race track, assisted in an arrest, and at the end of the day checked in at the chief’s office. There he changed from one uniform to another and went off whistling to complete his time.

And here’s a mildly puzzling communication from the Family Allowances branch of the Department of National Health and Welfare to its flock:

“Here is your Family Alllowance cheque. We have had a big job on our hands to get these 1,300,000 cheques in the mail every month. Sometimes, for a variety of reasons, these cheques go astray, and it is then necessary for you to write us about them. When this happens, it would help everybody if you would be sure to quote your Family Allowance serial number, which appears just to the right of and on the same line as your name on the cheque.”

Contributions to Parade should be of general interest, recent origin, and refer to happenings wilhin or closely connected to Canada. Items should be accompanied by some substantiating evidence. Accepted contributions are paid for at regular rates. No contributions can be returned 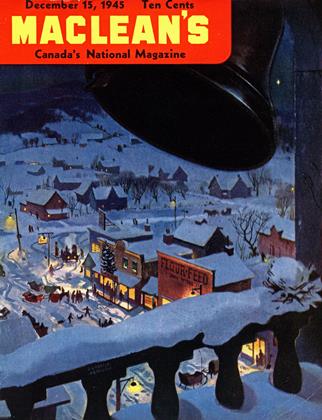