MARK WESTLEY tipped the boy a quarter, looked along his polished fingernails, touched away the remaining dampness on the back of his neck and walked out of the barbershop, into the middle of a bright, cool, spring day, with the jauntiness that comes only from that tonsorial cocktail of haircut, shave, shampoo, massage, shine and manicure. He turned toward Ste. Catherine Street, glancing, not self-consciously but with definite interest, at his reflections in the plate glass of the shop windows. He was curious as to how much this inner feeling of his essential “presentability” was actually evident in his appearance and how much was simply a state of mind. After a dozen or more glimpses of himself—he’d wait for the splayed window sides so that he could get himself face on—he decided it was about 50-50. He looked invitingly clean and neat and groomed, but that inner glow was not quite translated into the random reflections that he was able to catch when stupid people did not walk in between him and the plate glass.

He wondered how he really looked to other people. Too bad that saying about a man being as old as he felt wasn’t more specifically true. For today he felt about 20. Perhaps that’s what he was actually searching for as he kept on watching those reflections—the quick impression he’d make on people just passing by. What did they think? Forty-five? Thirty-nine?

Anything but his real age. He was sure of that. His real age! He was almost afraid to say the number to himself. It was incredible. He sounded—ancient. He must have made a mistake. He meant—no . . . that was it.

Old? Nonsense! Remember that play a few years back? “Accent on Youth.” How old was the fellow in that? Also in the fifties, wasn’t he? He hated that “also.” And yet that guy did all right. Far more attractive than the young blood who married thé girl and couldn’t hold her. Maybe it wasn’t so much that 50 was old. It was the dwindling years between that and 65, or even 60. That was just a little bit too unbearable. If he was going to continue to be. boyish and young at 60, he’d merely turn out to be silly, that’s all. Well, why spoil the present? He looked young and virile and he felt young and virile. Maybe living as a bachelor did that to a man. That’s what kept a man young.

He felt more youthful today than he had 25 years ago, when he was solidly (as he thought) married. Then he even looked older in a way—more settled, less eager. But he always seemed young. People invariably were astounded when he told them his real age. He was proud of it then. He even used to let the talcum of his aftershave creep up a little into his temples. Gave him some maturity—a touch of distinction. And then after that he found himself hedging a bit. The years were going somewhat too fast for his taste.

There was a time he would say, proudly, “Why, I’ve got a son five years old!” Then, as Drake grew up, that was changed to, “Yes, I have a little child.” Or, “Quite a boy!” in a tone which might have meant anything under four. And when this “boy” of his went to college, he’d say, “Why, he’s grown up now —not a baby any more.” Of course this was only to people who didn’t know him. It was none of their business that he was 15 years older than they thought. He wondered as he walked along—between reflections —whether that was why he had not been more of a pal to Drake after he’d grown up. Because he had been awfully fond of the boy. Showed him off everywhere. But you don’t exhibit a lad of 23 or 25 too frequently when you’re a bachelor and live as a bachelor. No, Drake hadn’t met too many of his friends. Drake to them was still “quite a young man now.” He said very little about Drake’s having been married for several years.

He walked along Ste. Catherine, feeling better by the minute. If he could only keep on like this all through the day, all through the evening. That was the hard part. He’d get a bit tired and think longingly of a quiet nap just at the moment when those who were as young as he looked were getting their second wind and not worrying about tomorrow morning. It was hard to keep it up—and when he did feel tired, he

feared the lines on his face were giving him away unmercifully. He once caught a glimpse of himself suddenly, unexpectedly, in a hall mirror, just at the moment he was being quite the life of the party. He was shocked and chagrined. He didn’t know he looked like that. He went home early that night. Got in a good 10 hours sleep.

Well, tonight it would be different. His appointment wasn’t until 11.30, after the theatre, and he’d have a nice, quiet dinner all by himself, sit around his place, maybe take a snooze until 10—and then he’d be at his best when he called at her dressingjroom. She was quite the loveliest-looking thing he’d seen in a long time. And he had been very interesting to her the first night they met. He spoke mostly about her performance, of course, but managed to imbue his tributes to her skill and beauty with what seemed to be a critical objectivity, so that his flattery could be more flagrant than if it were put in terms of sheer, openmouthed adoration. And when he suggested a late supper after the show, she was most gracious about it. He had been looking forward to it for a week. He was awfully good with girls like that. Suave and civilized and intelligent—and boyish. He could hold his own with any of the younger men—men as young and as charming as his own son. And Drake was a pretty charming fellow.

Thinking of Drake, he realized he hadn’t seen the boy for some time now. And he was extremely fond of Ellen, too. He really should be spending more time with them. He’d see them tonight! He’d have dinner with them, leave early, in time to get in that bit of a nap, and then he’d feel better about the rest of the evening. Nothing like doing one’s duty once in a while. He stepped into a phone booth.

ELLEN seemed a little drawn, a little heavy and tired as he sat down to dinner with them. He had the feeling that she looked years older than—well, that girl he was seeing later, for instance. Drake, on the other hand, was more buoyant than usual. He was terribly fond of his father and apparently had no feeling that he had been at all neglected by him. That made it nice for Mr. Westley. He didn’t have to make apologies or even explanations. He felt welcome whenever he was able to drop in.

But tonight Drake was Continued on page 20

glowing about something. With the roast of beef, which Mr. Westley insisted on carving—he had a nice hand for that sort of thing—Drake brought in a fine old bottle of Burgundy. It had been a wedding present. This was the last of the case. While Mr. Westley carved so that not a shred of meat clung to the thin steel knife, Drake opened up the bottle and poured. Then he held his glass high.

“Mark!” he said. He had always called his father by his first name. Mr. Westley, for some reason, never liked “father” or “dad.” Mr. Westley looked up. He saw Drake looking fondly over at Ellen. Ellen was nodding shyly. Drake turned to his father.

“Mark—this is a bit of an occasion. We weren’t going to say anything yet—but as long as Ellen doesn’t mind . . .”

Mr. Westley looked from one to the other. He knew now why Ellen seemed a bit drawn and tired. He should have guessed immediately. So, that was it! Drake’s excitement and the rare old wine . . .

Mr. Westley raised his glass to them. “Good news,” he said. “Things like that are, of course, always more or less expected—and yet it’s—it’s quite a shock a very, very pleasant shock. I hope—I know that this will make you both extremely happy.” To his own ears the words sounded like those of an amiable stranger, but they didn’t seem to notice. They drank and then Mr. Westley rose, came over and kissed Ellen tenderly and shook the hand of his son. “Think of it! My boy Drake—and Ellen! It seems like yesterday . . .” He sat down again.

Ellen looked at him with wet eyes. “I wanted to telL you immediately. We knew it would mean as much to you as it does to us. We’ll teach him to call you ‘Mark’ right from the start!”

“She may not want to,” Drake interposed.

“I think she should have her own choice in the matter,” said Drake.

“The youngest grandfather that ever lived!” said Ellen.

MARK WESTLEY left the house early. Said he was tired and wanted to turn in. He walked down Cote des Neiges to Ste. Catherine. He’d hail a cab later. He passed an elaborate florist’s shop. It was open and brilliant with light and color.

The florist brought one and he sat down to the little desk and took the cap off his fountain pen. He turned to the florist.

“Could you get it to His Majesty’s before the final curtain?”

Of course that could be done. It would be there before 11.

“Thank you,” said Mark and turned back to the desk. He thought a moment and then wrote swiftly: “My dear. Unable to see you tonight. Something utterly unexpected . . . Will get in touch with ,you later in the week unless I’m called out of town. In any event, success to you always. With deepest admiration—”

He hesitated for long moments, during which the florist almost had the corsage entirely arranged. Mark, pen in hand, looked over at him as he placed it carefully in the square box. Then he turned back to his card. 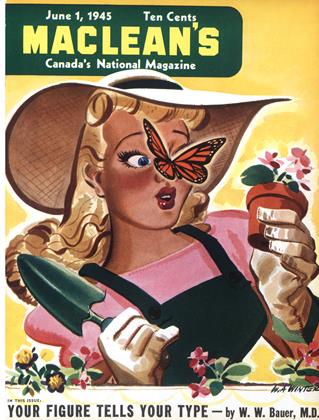