BACKSTAGE AT OTTAWA THE MAN WITH A NOTEBOOK July 1 1945

BELIEVE it or not, politics wasn’t the only motive in the promise to cut income tax now that V-E is here.

Politics helped, of course. Everywhere, but especially among the prairie farmers, income taxation was a vexation to Liberal campaigners. But instead of an argument the politicos got nothing but agreement when they brought the matter up with the brain trust of the Finance Department.

Optimists are hoping that even yet something may be done toward real tax reform in time for this year’s budget. Most people seem to think, though, that this is too big a job. More probably this year’s tax relief will be a straight percentage slash of the totals, calculated as before, and the long-overdue revision of the whole tax structure will be started with 1946 as target.

From taxes to reconstruction:

One reconstruction department job that’s been handled with, perhaps, a little more speed than discretion is the disposal of the first half-dozen war plants. These were sold to established industries, like Canadian General Electric, for what the Department regarded as fair prices. But it’s admitted-—nay, even boasted, and not without reason—that price was not the major consideration. Major consideration was the amount of employment that could be given in the plants under civilian operation. They’d rather sell a plant for, say, half a million and have a couple of hundred people given jobs in it, than sell it for a million and have it used as a warehouse.

But in the understandable haste to get these plants working on civilian jobs, the disposal officials skipped a few formalities.

For one thing the sales weren’t advertised.

They didn’t have any yardstick except their own judgment as to what the plants were actually worth.

Another thing—not the officials’ fault—is that under present accounting procedure the apparent costs of some plants give a most misleading impression when compared to the amounts for which the plants are now being sold. Reason, of course, is that a high percentage of the original cost went for purely war purposes. A good example would be the elaborate, expensive and now entirely useless rifle range that had to be built under the John Inglis plant at Toronto. It isn’t possible or reasonable to collect for things like this in the sale price for civilian use. But because the published figures show only a lump sum for the cost of each plant, it sometimes looks as if the place were being sold at “fire-sale prices” for a tenth of its value.

On the other hand, at odd times during the war, a plant that looked like a dead loss has been turned into an actual money-maker.

One such case is brought to mind by the return to private business of J. R. Donald, who goes back to his own firm this month after five and a half years in the chemicals and explosives branch of Munitions and Supply.

Early in the war the British asked us to build a plant for ammonium nitrate. They had one, which was making all they needed for their explosives industry, but they thought it would be bombed out any minute and they were afraid of being caught shorr. So we built the plant, for $30 millions. Then it turned out the British wouldn’t need it—their own plant hadn’t been bombed after all. We were left with a $30million-dollar plant and nothing to do with its product.

Donald went to Washington. The American war effort was just beginning and the explosives plants were yelling for supplies. “We’ll take all you can make,” they said. That solved the problem for a year and a half, but then the American supply caught up with demand and again nobody wanted the stuff we in Canada were turning out.

Donald went to Washington again. “What about fertilizer?” he asked. “Have you enough of that?”

Well, no, they hadn’t. But ammonium nitrate? had

never been any use for fertilizer.....chemically it was all

rigid, but it caked solid in the bags, so when the farmer got it to spread on his land it was just like a tombstone. Canadian chemists did a fast job of research, found a way to make the? stuff so it wouldn’t cake. Result: We’ve sold every ton we’ve made, and even with peacetime we may still have a hit of a market for it. The plant has just about paid for itself —anything it earns from here on in will be gravy.

HP AX allotment will be the big hurdle at the forthcoming Dominion-Provincial Conference, but public works co-ordination will be the hardest job in actual operation.

Department planners have lots of ideas for public works—combined soil, forest and water-power conservation projects; «air-rail-water-road transport hookups; improved communication systems. But they can’t find a man for the key job of Co-ordinator of Public Projects. At this writing the job has been offered to half a dozen top-drawer executives and all have turned it down. Each gave a different re«ason, but the unanimity makes the Department suspect that the real reason was always the same—scared by the size of the task.

Other branches of reconstruction work are going ahead fast, however. A. A. McKay, Co-ordinator of Resources Development, has a number of his smaller projects already under way—surveys are beginning for new air-landing strips in the mining country of the north, and for proposed improvements in radio telephonic communications in the same area.

Projects in hand for the present year are not of a kind that will take much money or provide large-scale employment. But reconstruction men stress that preparatory work, detailed planning and surveying now are indispensable if fruitful large-scale work is to be made possible in, say, two or three years’ time— when we might be running into a period of slack employment.

I lousing, on the other hand, is urgent business. And «at, last, after months of stalling and humming and hawing, the housing program is beginning to click. Not soon enough, it’s true, for the thousands of war veterans already home who can’t find houses in which to establish their families. But at least relief* has come into sight. Actual building has begun in some of the more acute shortage areas, and plans are moving for a lot more.

Nothing has been done yet, though, about low-cost housing, low-rental dwellings and, indeed, the whole problem of construction costs. Steps have been taken to provide loans at low interest rates to the home builder, but that’s not enough if construction costs continue to skyrocket—after all, a man’s no better off paying 4% interest on $160 than he is paying 6% interest on $100.

'The problem of low-cost, low-rental housing is deep and thorny, especially if you intend—as the present set of planners do intend—to stay out of state-owned enterprises as much as possible. But Ottawa is realizing more clearly every day that some solution had better be found, and fast.

For years people coming back from international conferences have always reported— in Canada, at least—what a grand job the Canadians had done, how highly they were regarded by other nations, etc., etc. It got to be so habitual that some of our less credulous citizens began to think it was just a kind of international platitude, like the undefended border.

But at San Francisco there were a couple of dozen impartial Canadian observers, and they all report that this shopworn story is really true. Canadians do show up well at these international get-togethers.

Mainly it’s a dividend of a policy that’s been consistent for over 20 years, under all governments—the policy of hiring the very best type of man available for the Department of External Affairs. The Government has proven that you can do this without offering big money or even middle-sized money. Brilliant young men come to the East Block and work their heads off, six long days a week and many an evening and Sunday, for half

of what they could earn in business.

Why? Because External Affairs understands that a young man wants responsibility, the satisfaction of knowing his work is important and heeded, more than he wants money. External Affairs salaries are as miserable, in the lower brackets, as any other government department’s. But right from the start their bright young men are given important work.

Now, after a couple of decades of this, we were able to send a team of professionals to San Francisco of which any nation of whatever size might well have been proud

But it wasn’t only the professionals who did well at San Francisco. One of the “discoveries” of the Canadian delegation was the Leader of the Opposition and Progressive Conservative delegate, Gordon Graydon.

Graydon has never had any pretensions to special competence in international affairs. When they came up in debate it was usually Howard Green or John Diefenbaker who carried the ball for the Progressive Conservatives. And when he was invited to San Francisco, Graydon regarded himself as representing not so much his Party as the ordinary Joe—the average Canadian who doesn’t know much about foreign affairs either.

But when he got there Gordon Graydon turned out to have talent for t he job that neither he nor anyone else had suspected. His outstanding quality has always been a warm kindliness—his feeling toward his fellow man is one of instinctive and genuine friendliness. And this quality of his got across to the delegates of other nations, across the barriers of language and cultural differences. Graydon sincerely liked the people he met; sensing this, they liked him. Result was that he was able to do a real job for Canada, according to fellow delegates of the other Parties. 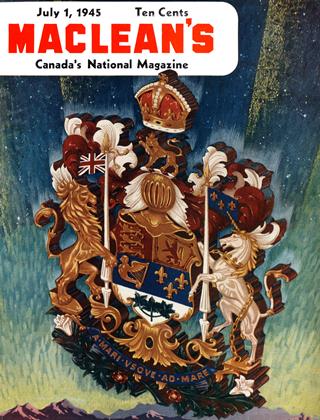