WHILE British Columbia folk were speculating as to the possibility of bomb-carrying Japanese balloons landing in their midst, a painter and a pianist-composer dropped a bomb of a different sort among Vancouver art patrons. They accused the mainland city’s rich merchants of snooting Canadian artists.

The charge was laid at graduation exercises of Vancouver School of Art by Charles H. Scott, outspoken director. Prompt backing was given by Arthur Benjamin, internationally known pianist and composer.

Mr. Benjamin stigmatized Vancouver merchants and their wives as “snobbish” because they asserted 1 y prefer to buy reproductions of old masters rather than the work of young Canadians sadly in need of recognition.

“These self-styled arbiters of art,” he trumpeted, ‘feel that if a thing is Canadian it can’t be quite good enough for their nice homes.”

By way of illustration, Mr. Benjamin cited the tardy recognition givan to Emily Carr, whose

swirling canvases of coast forest» totem poles and Indians drew scant attention in her home province until after her death.

Mr. Scott extended his censure to the Federal Government. Its rehabilitation plans, he said, provide only one year’s study in commercial art against four in other subjects.

“In no country,” he protested, “is less attention given to art than in Canada.”

Rallying belatedly, art patrons got in their word. They insisted that Canadian work of merit doesn’t go unrecognized, and as an example cited the case of Sing Lim, 24-year-old Canadian Chinese, who is this year’s winner of an art scholarship awarded by W. G. Murrin, B. C. Electric Railways president.

Vigorous Vancouver was inclined to regard the highbrow Donnybrook as a tempest in a palette, but waited hopefully for new clashes.

poisonous snakes and Japanese are lacking, but the dense, rain-nurtured forests provide almost every other tribulation.

Since training begins at the top, 100 senior staff officers have been attending sessions at Chilliwack, 80 miles from Vancouver, under supervision of Maj.Gen. F. F. Worthington, G. O. C.,

Differences between German and Japanese fighting tactics are also being taught. Main divergence, say the experts, is that the Japs don’t know when to surrender.

For a summer treat, British Columbians have been promised the worst

visitation of caterpillars since 1918, on the authority of W. H. Downes, provincial entomologist. Advance warnings indicate the pest will be widespread as well as heavy, varying with local conditions.

Doubtful consolation is to be found in the further prediction that 1945 won’t be as pestiferous a year as 1946, when caterpillars will be even more numerous, unless the beetles that eat the fuzzy-wuzzies are unusually active in July and August.

The Alaska Highway paid an unexpected dividend to Edmonton when city fathers cast about for a method of meeting the housing crisis expected as servicemen flock home. Huts that had sheltered American highway construction personnel had been turned over to the Canadian Government, which, through War Assets Corporation, offered them to Edmonton for $150 each.

Although aldermen felt the huts were not the most desirable form of housing, they snapped at the offer. One hundred of the big structures were purchased. Each will be converted into four apartments, with all modern facilities, at a cost of about $8,000 per hut.

Veterans will pay $25 monthly rent. Alberta’s Social Credit Government will lend the city $1,000,000 at 3% for the conversion project, and will share equally in operational losses.

Western hog production, which skyrocketed with the outbreak of war, haa plummeted in no less spectacular i fashion. Many reasons for the decline have been advanced, chief of which is the cumulative effect of the wartime labor shortage.

Farmers of Alberta, Canada’s leading hog province, are keeping an apprehensive eye on the British bacon market, which has been drawing 80% of its requirements from Canada, compared with a pre-war 20%. Farmers and ! government officials alike fear that if the British market is lost now, through insufficient production, many years will i pass before it can be regained.

With a marketing drop of close to 40% this far in 1945, the picture is anything but rosy. Last year Canada supplied, without trouble, 675 million pounds of bacon to rasher-hungry Britons. Authorities admit it will this year take hard scratching to supply the minimum quota of 450 million pounds. * * *

Residents of Bredenbury, Saskatchewan hamlet 35 miles southeast of Yorkton, watched a gaggle of Canadian and American scientists set up their complicated apparatus in the town ¡ early this month, and enjoyed their few days of bustle and excitement. Bredenbury was located in the exact centre of the band of the total solar eclipse that darkened the skies on i July 9.

Army engineers from Regina made ; advance preparations for study of the eclipse. Photo reconnaissance aircraft i from Rivers, Man., were assigned to ! help “cover” the event. Personnel and I equipment for a ground station were I provided by the U. S. Navy. The I astronomers flocked in, clamoring for I darkrooms, as well as bases, for their I cameras and telescopes.

The shadow came and passed. The I visitors departed, and Bredenbury I basked again under its unclouded sun. * * *

Snow Lake, say northern Manitoba’s optimistic miners, may soon be as familiar a name as Flin Flon. Now that the Dominion Government has flashed a green light through removal of three-

Nothing stands in their way except labor and machinery supply, both of which the companies hope will be available this year. They foresee that many ex-servicemen will be attracted to the Manitoba north, and are already talking freely of an impending boom.

The Snow Lake district is already staked over an area nearly 20 miles by 10. Important gold finds were confirmed in 1942 after extensive prospecting and drilling. Of the several companies which have moved in, one is going ahead with plans for a 2,000-ton ore mill and 1,000-foot shaft, which would make it among the larger gold operations in Canada.

The motion before Ontario Command of the Canadian Legion in convention at Sault Ste. Marie called for the expulsion of Japanese.

The Ojibway delegate from Croker Point told his comrades gravely: “You can’t blame Canadian-born Japanese for the crimes of other Japs thousands pf miles away. When it comes down to brass tacks, everybody here is a foreigner except me. The Legion must never associate itself with racial prejudice . . . We must preserve our sense of balance with justice for all.”

Other Legionnairesagreed with I ndian Delegate W. Jones. They whacked the resolution, introduced from London, as “unfair,” “intolerant,” “undemocratic.” While the convention made it clear that it favored expelling Nipponese who had not become citizens of Canada, it left no doubt as to its opposition to any move aimed at ousting the Dominion-bom Nisei.

Sun bathers who seek a tan on the roof tops of Montreal apartment houses had better pay heed to their decorum, city police have warned, following complaints from staid spinsters in one downtown building that sweet young things have been cavorting in garb which left insufficient to the imagination.

The gendarmes who investigated the complaint found it true—three lassies were sunning on an adjoining roof, clad only in sheets which they wrapped and unwrapped as Old Sol beckoned.

From headquarters a doublebarrelled ukase was issued: landlords

will be held responsible for the deportment of tenants on the premises, and in future sun bathers must be attired at least adequately enough to pass a Hays Office inspection.

At a loss to find suitable gravel for the paths, Montreal civic authorities welcomed a suggestion that ships arriving light from Britain carry rubble in place of the usual water ballast. Shipping lines agreed to co-operate, and debris from ancient buildings of London, Hull, Cardiff and Portsmouth was unloaded at Montreal docks.

Most tragic reminder of the Battle of Britain was a child’s toy tank, which spilled out of the scoop shovel uncrushed.

Full extent of the New Brunswick Government’s efforts to obtain new supplies of cheap power are only now being disclosed. Premier John B.

McNair has announced that for some months past the Power Corporation of Canada, in conjunction with the Resources Development Board, has been looking into the potentialities of the St. John River watershed.

The Premier also divulged that arrangements have been wound up for an extended investigation of the entire watershed of the Tobique River, worldfamous among sportsmen for its salmon fishing.

If the river is found to have power possibilities, Mr. McNair hastened to comfort worried anglers, every precaution will be taken to preserve their sport. He added he had received assurance that the problem of fish passage to the upper waters could be satisfactorily overcome.

Sphagnum moss, used by fruit growers of Texas and California to protect their perishable products against frost and heat in transit, may soon bring the Yankee dollar to Prince Edward Island.

Valuable beds of high-grade sphagnum, or peat moss, have been discovered on the Island, and plans are under way for their utilization.

The moss has numerous other commercial uses. It is indispensable in the manufacture of magnesium. It Is an excellent soundproofing material when blown between outer and inner walls, and with its bacteria removed it performs well as a fertilizer and soil conditioner.

Signs of the times in Halifax . . . The steady draining away of service personnel . . . Return of H.M.C.S. Kings to its peacetime university status . . . Closing of the Wings Club, homey haven for airmen in the arcade of the Nova Scotian Hotel.

Haligonians watch the transformation with mixed emotions. Those who have fidgeted in theatre, lunch counter and streetcar queues hope the wartime population will decrease to a point where they no longer line up for food, transportation and entertainment. 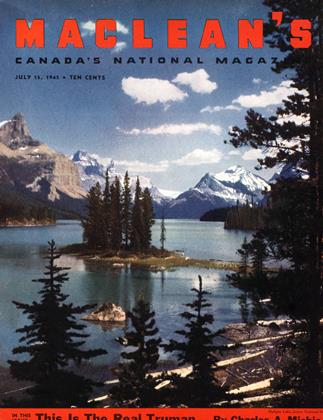