THE United Nations Charter will be approved by the United States Senate by the requisite two-thirds vote. If all 96 members of that body

are present when the vote is taken—and only a critical illness will keep any of them away on so important an occasion—64 affirmative votes will be necessary. It now looks as if there would be more than 80. And it is possible that by the time the roll is called the opposition will have shrunk to half a dozen or fewer “irreconcilables.”

When the League of Nations Covenant was before the Senate in 1919 and 1920 the tendency was to say: “Its purpose is good but there are a great many flaws in this document.” American membership in the League was blocked by indirection, by attack on details.

This time the sentence will be reversed. It will read: “There are a great many flaws in this docu-

ment but its purpose is good.” Page after page of the Congressional Record, in which the proceedings of both Houses are kept, will be filled by senatorial

speeches pointing out the shortcomings, actual or supposed, of the San Francisco charter and warning that it will not produce the millennium. But having registered their misgivings nearly all the Senators will say, “Aye.”

The only question is, “How soon?” President Truman wanted the Charter ratified before the “Big Three” meeting near Berlin in mid-July. But being an experienced politician and only recently a Senator himself he did not press the matter. The Senate is sensitive about its dignity, which many of its members associate with a leisurely pace, minute attention to formalities, and lengthy dissertations. Under the rules of that body, indeed, it is almost impossible to stop debate so long as any member wants to talk more.

By the test of experience, approval of the Charter by September would have to be regarded as reasonably rapid action by the Senate. President Truman feels, probably rightly, that affirmative action by the Senate would instantly weaken the justification for unilateral actions by various nations. The possibility that the United States might “withdraw,” as it did after the first World War,

has been pointed out repeatedly to our diplomatic representatives as an argument or excuse for action which appeared to be contrary to collective enforcement of the peace.

We who are in Washington may be absolutely confident of the Senate’s attitude; but remembering 1919 and 1920, it is easy to understand why more distant observers may still be sceptical, and why they may wish to “hedge” against a dissolution of the collective system even before it has begun to operate.

There have been, however, a number of convincing harbingers. Both the House and the Senate have voted to renew the Reciprocal Trade Agreements Act with authority to cut tariff rates by an additional 50%. The original Act, passed in 1934 and extended periodically since then, gave the executive branch power to reduce 1933 tariff rates by 50%. The new law, therefore, will allow reductions from the pre-Roosevelt, tariff totalling 75%. Of course these will not be made with respect to all items.

In the House of Representatives the Republicans voted almost solidly against renewal. But in the Senate party ranks broke. The tariff question is a severe test, because it directly affects the pocketbooks of many specific local and regional interests.

The Bretton Woods agreements on currency stabilization and an international bank have mustered bipartisan support. The vote for them in the House was overwhelming. In the Senate, which is considering them as this is written, the opposition comes from a few Senators who had worked themselves “out on a limb” by strong utterances during the earlier attacks on the agreements by private banking interests.

James F. Byrnes, the new Secretary of State, has had probably a wider experience in public life than any other active member of either major political party. After a thorough grounding in local and state politics he served 14 years in the House of Representatives and 10 in the Senate, where he was regarded during Roosevelt’s early years as President as the most authoritative White House spokesman. Roosevelt appointed him to the Supreme Court in 1941, but 15 months later persuaded him to leave the highest bench to take charge of the fight against inflation, with the title of Director of Economic Stabilization. Byrnes performed so effectively that early in 1943 Roosevelt created for him the new office of Director of War Mobilization, with authority over nearly all civilian war activities. In this capacity Byrnes also worked up plans for demobilization. Until shortly before Roosevelt’s death, when he insisted that his resignation be accepted so that he could take a rest and return to private life, Byrnes was really the assistant president in charge of domestic affairs.

Probably the only office, except the presidency, which would have attracted Byrnes enough to keep him in the Government was Secretary of State. When Secretary of State Hull resigned early last winter, he was the choice of a majority of the Senators for that post, simply because they knew Byrnes well, liked him, and trusted his judgment. Roosevelt preferred his own protege, Edward R. Stettinius, Jr. But he took Byrnes with him to the Yalta conference, in addition to Stettinius and Harry Hopkins.

When Truman entered the White j House he felt instantly the pressure to j replace Stettinius with Byrnes. Stetj tinius is energetic, attractive, and has ! great promise as a politician. But he j has never held or sought an elective j office, and never occupied an appointive ! office until about five years ago. As an i agent for Roosevelt he was acceptable, j But the consensus was that Truman, j being inexperienced himself in interj national affairs, needed a stronger | Secretary of State. The fact that under j existing law the Secretary of State j would become President if Truman should die or become disabled intensified the demand for a change.

A change on the eve of the San Francisco conference, however, would have upset a good many arrangements. Besides, Stettinius, having managed the Dumbarton Oaks conference and worked all winter on preparations for UNCIO, was the logical man to see the Charter through to its final draft. And when UNCIO adjourned he became the logical man to represent the United States on the world security council. I Stettinius is a first-rate general man! ager, and as he is only 44 years old he is j still a man to watch.

Byrnes is slender and of medium height, very quick in his movements ! for a man in his middle sixties. He makes a good speech, but he is at his best at a small conference table, where j his quiet, friendly manner and talents for persuasion and adjustment of conflicting views can be fully employed. He is a warm personal friend of Truman’s. Indeed, Truman had intended to place Byrnes in nomination | for the vice-presidency at the Democratic National Convention last summer, until Roosevelt decided he preferred Truman himself as his running mate, and Byrnes withdrew from the competition.

Robert H. Jackson, the United States prosecutor in the forthcoming I Nazi trials, is another man on whom the spotlight is now turned. Although Jackson never graduated from law school he is one of the most learned and incisive justices of the Supreme Court, to which Roosevelt appointed him four years ago. One of Truman’s first acts was to dump into Jackson’s lap the whole problem of punishing war criminals. Despite the preparatory work done by the War Crimes Commission, thinking on the subject was badly snarled—at least in Washington. Who was to be punished? And for what?

Jackson came through with a broad plan for a master trial of the leaders of j Nazi Germany for conspiracy to wage ! aggressive war. According to his view, such acts as the persecution of minorities before the war were part of the Nazi plan to get an iron grip on Germany in preparation for an unjustified war, and therefore are punishable by an international tribunal. Jackson also proposes to indict as a whole the ¡ membership of the Gestapo, the S.S., and other key Nazi organizations which were composed of volunteers.

Jackson’s thinking stems from Grotius. But it sweeps away many later concepts of international law and establishes the principle that the leaders of a state which wages an aggressive war are to be held individually responsible before an international tribunal.

Jackson was almost unknown except in western New York, where he had practiced law and Democratic politics since his youth, until Roosevelt brought him to Washington a few years ago. In six years he scrambled up the New Deal ladder to the attorney-generalship, whence he went to the highest court. Roosevelt tried to make him the Democratic nominee for Governor of New York, but the old-line party ;

politicians would not have him. On the Supreme Court, however, he has hewed to the middle of the road. His special job for Truman brings him hack into the public eye in a different setting, without New Deal trimmings. If the trials go well he may find himself drawn back into active politics. Already several top-rung Democratic politicians are talking about him as a future Secretary of State or as Truman's vicepresidential running mate in 1948.

Harry L. Hopkins, the late President Roosevelt’s closest friend and adviser, stayed on the job long enough to help fill in the foreign picture for President Truman. He has acquired new prestige as a result of his recent special mission to Moscow, especially for his success in breaking the deadlock over the

reorganization of the Polish Provisional Government. Truman would like to have him in Washington indefinitely. But Hopkins has been a semi-invalid for six years; he likes Truman but probably would never have the same intimate relationship with him that he had with Roosevelt. He wants to get down on paper some of his recollections of Roosevelt and some of the incompletely recorded “inside” history of inter-Allied relationships during the war—beginning with his own trip to England in early 1941 to see Churchill and his visit to Stalin in July of that year. Hopkins did not keep a diary. And with the passing of-Roosevelt he is the only American who knows some of the things that were said at the various meetings of top Allied officials. 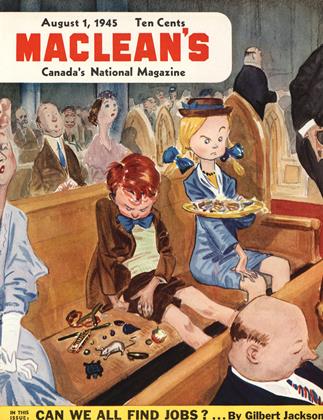