The One Nation Conference August 15 1945

REPRESENTATIVES of other nations have said some very nice things about the part played by the Canadian delegation at the San Francisco World Security Conference.

The Canadians did a great deal to win status for the middle-sized and small nations. They get credit for restoring to importance the Economic and Social Council, practically ignored at Dumbarton Oaks; for redrafting clauses in the Dumbarton Oaks agreements in a manner acceptable to all. And the Canadian delegates and advisers smoothed out several knotty situations in committee.

At this international conference of 50 nations, a conference whereat innumerable languages were spoken and understanding was difficult, Canada did a very good job indeed.

This month sees the beginnings of the longawaited Dominion-Provincial Conference at Ottawa.

The affairs of only one nation are involved. Ours. All the delegates are Canadian. They all speak and understand English perfectly, though French may be spoken at times.

Yet political observers in Ottawa have reported that high hopes are mixed with deep doubts as to the possibility of success.

The one nation has 10 governments; is divided into nine provinces whose problems differ. Therefore there are differences of opinion regarding some of the major items on the agenda. There is reluctance on the part of some provinces to yield “rights.”

The four major tasks on which the Dominion Government seeks agreement are these:

Establishment of a rational, unified tax system. Clarification of jurisdiction regarding social legislation.

Co-operation in conservation of natural resources.

A master plan for the timing of public works as an insurance against future unemployment. In short, Canada’s whole postwar reconstruction program is involved.

The future welfare of every Canadian is at stake.

Our performance at San Francisco indicates that we have grown considerably since the year when the Sirois Conference was blown to smithereens.

We are hopeful that this will be equally apparent at the Ottawa Conference. If it isn’t, if we demonstrate that we cannot solve our own domestic problems, then we lower our prestige in the eyes of the 50 nations who think we’re a pretty sound, level-headed people. Worse than that, we land ourselves into one awful mess. Which is something the Canadian people are not likely to stand for.

We prefer to think that those who are meeting to plan a future are well aware of the fact that it is the future of Canada.

T} ECENTLY we commented on the results of a survey made by the Canadian Institute of Public Opinion which revealed that a substantial proportion of our adult population could not explain the meaning of such frequently used terms as Socialism, Communism and Democracy.

In this issue of Maclean’s the editorial director of the CIPO discusses in greater detail the things Canadians don’t know. To us the article is outstanding because of one glorious ray of brightness; a lighthouse beam flashing across the dark seas of ignorance and uncertainty.

It is a prairie housewife’s definition of Democracy.

She said: “IT IS THE STATE OF CONTINUING AS AN INDIVIDUAL POTATO, RATHER THAN BECOMING A MASHED POTATO.”

SO MANY humble objects have won battle honors that we were not at all surprised to learn that the simple tennis ball defeated one of Germany’s prize weapons, the magnetic mine.

Early in the war, experts were asked to solve a problem which threatened the success of Britain’s newly devised mine-sweeping technique. That technique involved the use of minesweepers, each towing 500 yards of electric cable. Powerful current, generated inside the ships, was to be passed through the cables into the sea, thus exploding the mines. But the cables had to be made to float, and the stumbling block was how.

The scientists soon hit upon the solution. They carried the electric wires on a cable made of tendis balls, tightly packed, one after the other. The thing worked beautifully.

It you play tennis, next time you are poised for an overhead smash, you might remember that the family of that little ball helped to win the war. 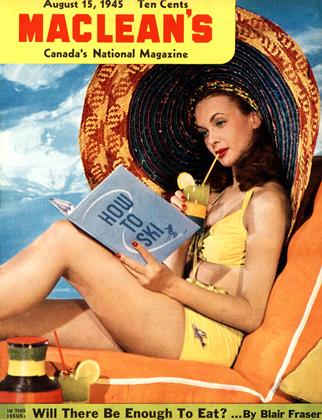