In the Editors Confidence September 1 1945

Click to View Article Pages
In the Editors Confidence

MACLEAN’S Canadian Short Story Contest closes September 1. Judging will begin immediately, and every endeavor will be made to expedite it. But each story must be carefully considered; many will be read by several judges. So some time must elapse before the awards can be announced.

To any contestant who is dream' ing of overnight fame, we might tactfully point out that for the first nine years after he arrived in London, George Bernard Shaw sold practically nothing. • One year he earned two shillings and tenpence. And Conan Doyle, creator of Sherlock Holmes, slaved for five years before he made a living from his pen.

^Marcel Thomas, who prepares meals by the thousand (being chefsteward at Montreal’s Mount Royal Hotel), on page 10 tells how appetizing items can be whipped up on Meatless Days. Incidentally, we are fascinated by the news that at home it’s Madame Thomas who does the cooking.

0Beverley Baxter, who on page five discusses the results of the British elections, remains an M.P. He was re-elected in Wood Green, Middlesex. There were 11 Canadianborn candidates in the election. Eight lost.

^In the mind of Jerome Davis there is no doubt at all as to Russia’s intentions toward Japan. On page 12 he expresses his certainty that the Soviet war machine is being oiled up for a wallop at Nippon; is willing to go out on a limb with the forecast that the blow will be struck before this winter.

Dr. Davis is not the seventh son of a seventh son, but his knowledge of both the Russians and the Japanese gives considerable weight to his reasoning. Most of his childhood was spent in Japan, where his missionary father founded the first Christian university, at Doshisha. He revisited what is now the Land of the Setting Sun in 1935.

In YMCA work since early manhood, Jerome Davis went to Turkestan in 1916 to take charge of pmoner-of-war work. That was under the Czar’s regime. Came the revolution, and on orders from the U. S. War Secretary he stayed on in charge of all YMCA war work in Russia. Since then he has been back to Russia ten times. Prior to his most recent visit he was director of prisoner-of-war work in Canada for the World Alliance of YMCA. In 1943 he started a journey that took him to Portugal, Egypt, Iran and the Soviet territories. He went to the Crimea, to Stalingrad, Leningrad, Moscow, Kief, Smolensk, Minsk, Odessa, Kalinin and sundry other places; saw most of the infamous “death camps,” attended the trial of German war criminals

at Kharkov. He gets along quite well in Russia, does Dr. Davis. On an earlier trip he was the first American correspondent to interview Stalin; had one four-hour and one eight-hour session with him.

On his way home this year, Dr. Davis, at the invitation of Lord Wavell, went to India; talked with Gandhi, Jinnah and other leaders.

Obviously dreading monotony, he lias flown around South America, and in 1915 was with Grenfell in Labrador. He is author of 14 volumes on international, economic, social and religious questions, and has taught at Boston University, Dartmouth College, Harvard and Yale.

® Reading “Sawdust in Their Eyes’’ (page 16) you might conclude that author Eleanor Coates must come of a family with circus blood in it somewhere. Not so. A Nova Scotian, of United Empire Loyalist stock on both sides, her Father was a Methodist minister, and the family tree, as she puts it, “has borne large crops of ministers, missionaries and teachers, salted with the odd sea captain.”

“I have always written,” says Mrs. Coates, “and was first published when I was 13. At 15 there was further encouragement: a prize from an IODE Canadian essay contest. In the last three years, since I began writing professionally, I have been published in Canada, England and the United States, and two of my stories have been made into plays for Victory Loan broadcasts.

“I have lived for short periods in three Canadian provinces and several American states, but principally in Halifax, N. S., where my husband was in radiobroadcasting. Now, however, he is doing a daily program on the Mutual Broadcasting System, so we live near New York, on a point of land which juts into Long Island Sound. Here I mind my three children, write my stories, and go back qnd forth to New York University for special courses.

“I can get along without formal functions, fussy clothes, and most moving pictures if I can see a few congenial friends, plant one crooked row in the garden, and get a letter every day.”

HJ. and A. Marx, who jointly created the character of Dr. Charlie Foster, a blind detective, and thought up the mystery solved in “Hear No Evil” (page 8), are man and wife. Mr. Marx is with the Office of War Information in New York, and Mrs. Marx, writing under the name of Adeline Rumsey, is author of “Crying at the Lock,” recently published by Simon and Schuster. Incidentally, Hollywood has bought film rights to the novel. 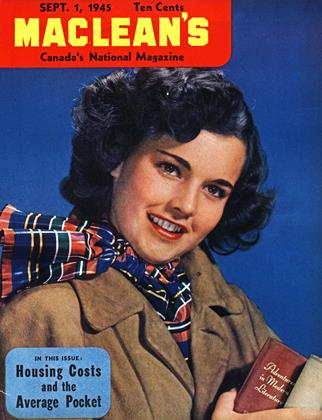