It is practically certain you’ll never keep your resolutions. For that reason, I—a maix of profound experience in such matters—am here to help you. Who knows? Perhaps from application of my methods you could astound your friends and confound your enemies by actually keeping a New Year’s resolution.

This year I have four resolutions: Not to

smoke five-cent cigars, not to swear, not to win any more sets of the Encyclopaedia Britannica from the sponsors of Information Please, and not to stand in queues. I will keep them, and if you’ll stand well back I’ll tell you how.

Giving up smoking five-cent cigars is going to be reasonably difficult. As a start I bought a year’s supply of six-cent cigars. This has caused certain operational difficulties around the home, as a year’s supply of six-cent cigars is a gx-eat number of cigars. We have only a small bungalow, and since I had the cigars delivered we are forced to live with friends until such time as I have smoked a path through the front hall and at least oxie other room, which I estimate will take nearly until Dominion Day.

However, despite this temporary dislocation of my home, it was the only way to make the resolution infallible. I had to consider that perhaps Mr. Ilsley will take some taxes off

tobacco when he brings down his budget in the spring. If cigars went back down to five cents and 1 had no backlog I would be trapped like a rat.

There are few problems for me in connection with giving up swearing. For one thing, it is only recently that I began to talk at all, let alone swear. My brother talked so much when we were boys that I didn’t even get to complete a sentence until I was 18 and had a date with a girl who inadvertently got her head stuck in a goldfish bowl and thus couldn’t make enough noise to interrupt.

Also, I have before me at all times the example of my Uncle Herbert, who owns a farm in Manitoba. He never swears. He says “Sugar” instead, and gets remarkable results. One night when he was milking a cow she switched her tail and hit him in the eye. He growled out such a devastating “SUGARr-r-rr” that the cow dropped dead of a heart attack. It turned out later that the cow had diabetes.

For convenience I have grouped certain other words with swearwords in my resolution. They are the most difficult of all to abandon. Several years ago, for instance, before I had perfected my system, I resolved to give up the use of the word “plashy.” That comes, of course, from the immortal quotation: “Feather-footed

vole.” It is so beautiful in sound and texture that I found myself using it too much, becoming a bore, and my friends colloquially referred to themselves as being plashy-happy.

Because I failed to take proper precautions against the use of the word, my resolution didn’t last long. One day, when happening to stroll by a particularly plashy fen, I turned and observed to my wife: “That’s certainly a plashy fen,

isn’t it?” It was out before I could stop it.

However, “plashy” will fall with all the other words 1 have resolved to give up for 1946. And it will be no particular hardship for me to go around with a pair of socks strapped into my mouth with a leather belt.

1 might have had a devil of a time keeping xxiyself from winning another few sets of the Encyclopaedia Britannica. Impossible questions keep running through my head. For instance, here is a set I thought of this morning when I w'as

waiting for our host to leave the bathroom so I could shave. The experts would be required to get three out of three.

First part: What body of land, eight times the size of Manhattan Island, in the Mediterranean area was held by the Germans until 1945? The experts would say: That is ridiculous, the

Germans were right back on their own borders by the beginning of 1945. I would be adamant, but I would give them a clue: The word has

three letters, I would say, and they are all consonants. I would win my Encyclopaedia right there— but where would 1 put it? J used to burn them at the height of the coal shortage during the war, but I still have four sets. Besides, did you ever stop to figure out how many cigars 1 would have to smoke to make room for another set of the Britannica? It would take all morning. The answer, of course, is Krk Island, in the Adriatic. If you don’t believe me, look it up.

1 WOULDN’T even need the other two parts of that question, but they’d be there just to round things out. The second question would be: This is a word which has three double letters in succession. It describes a million men on this continent. Pshaw! we won’t keep you iix suspense. The answer is bookkeeper—double O, double K, double E.

The third part is, I believe, the only five-letter word in modern use which begins with a consonant and ends with four consecutive vowels. It has been used by the world’s housewives possibly more than any Continued on page 32

other noun, since about 1940. It ! describes an activity which is a result of the war. I used it earlier in this article. Give up? The word is “queue.” You might well take that straw from between your teeth and wonder how I am going to get out of winning more j sets of the Encylopaedia, with ideas like that floating around. But for this problem, too, I have the only possible answer. I am sending a copy of this piece to John Kieran. When my questions come up he’ll know all the answers. 1 can hear now the excited bursts of applause for his brilliance, j I’ll do the same thing with any other ideas I have, too. Kieran and Young, hooked up this way, are unbeatable.

As for my final resolution, just thinking of queues makes me furious. If I were speaking to the Prime Minister at all this year I would have him tell the RCMP to drop all minor matters and just go around arresting people who line up in queues (taking care, of course,

! that the sterling fellows were able to distinguish queues from picket lines), j I have had many harrowing experi| enees with queues, including arguing

with people who use the word as a verb, i.e., queuing. It can’t be done. The verb is “to stand in queue,” and don’t let anybody short of Noah Webster tell you any different. If he does, you can say that a Mr. Oxford of the opposition dictionary people says he is wrong.

During the war it got so that an honest man couldn’t stop in the street without a queue forming behind him. One Sunday afternoon 1 ducked into a store doorway to straighten my tie, and before I could say “zoophyte” 19 people had lined up behind me, including a man from Wawanesa, Man., who had come to Toronto to try to sell Bay Street financiers on the idea of wearing sheepskin instead of velvet on the collars of their coats. With him was his entire family and one small sheep ho carried around as a sample.

The people behind me kept pushing, and complaining about how slowly the line was moving, until I was so jammed in that I couldn’t get out. At nine the following morning the door opened. By this time there were hundreds of people in the queue. The druggist, fearing a riot if he turned us away, sent an assistant out to keep people from pushing in ahead of their tum, and at $7 each sold 1,701 fountain pens with little musical box attachments which

played the first chorus of “The Maple Leaf Forever” when you unscrewed the lid.

I still have mine, and reflect now with shame that after the first shock of the queue forming up behind me I became as anxious as everyone else, and, indeed, considered myself fortunate to be first in line.

And the man from Wawanesa may not have made his fortune on Bay Street, but he at least has the only sheep in the world who owns a fountain pen that plays “The Maple Leaf Forever” every time it unscrews the lid.

I could close my eyes now and before me would arise a picture of dreadful fascination: a weird nightmare which developed from a normal theatre queue I once saw in London’s Leicester Square.

This theatre queue was waiting for the doors to open when along came some beggars, doing tricks for pennies. There was one who had captured one of those old spiked German field helmets in the first great war. By unrelenting practice during the peacetime years he had learned how to stand on his head with only the spike of the helmet touching the ground. This he did now.

He was a thoughtful man, and was immersed in a domestic problem when the theatre opened and the queue moved off inside. There he stood all by himself in the middle of Leicester Square on the spike of his helmet. A visiting shove-ha’penny team from Finchley East saw him standing there and thought it was a new way of standing in queues, which—by its very difficulty—must pay tremendous dividends. So they all stood on their heads too, until a man from the Ministry of Home Security came along. There were 34 people by then, two of them Yorkshire A4.P.’s. He thought they all were protesting against the shortage of coupons for buying shoes, and arranged for the Admiralty to sell each a couponfree pair of Navy boots.

Everyone seemed satisfied except one of the Yorkshire M.P.’s, who complained bitterly that he had thought the queue was for cigarettes.

You can see what I am up against. But because there is one thing that fascinates me even more, I will not stand in any more queues. If there are people waiting in line for anything, I will try to get them to stand in a crowd and rush in a mob for the door when it opens. But if they refuse to do that, I’ll play my trump card—I’ll go across the road and look in the snow for tracks of questing voles. I love voles. 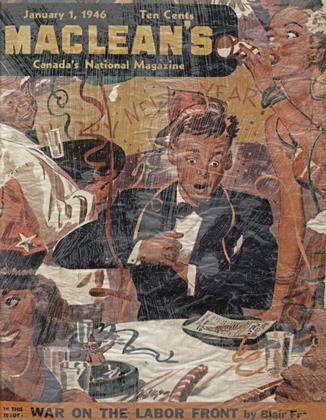