NICEST of all the little ceremonies connected with food and drink is that of filling the teacups for a four-o’clock twosome. Your partner may be a special crony come for a good gossip, but even the friendly dropper-in is reason enough to share potluck and a nibble of something.

The tea’s the thing when women get together. Have it fresh and hot and fragrant, brewed to the Queen’s taste and served with cream, milk or lemon. Steps in making are as simple as basic English but mighty important. Measure into the hot scalded teapot a teaspoon of tea leaves for each cup. Take the pot to the kettle. Pour fresh boiling water over the leaves. Steep four to five minutes.

Pussy fixin’s are all very well at a formal pink - candles - on - the -table tea, but keep them simple for a tete-à-tête and limit to one or two varieties. You probably can’t improve on sliver-thin slices of buttered bread and homemade cookies, but if you want something different try these:

Sardine Faggots — Use small sardines (if you can find them) or eut neat compact pieces and daub with horse-radish, ketchup or lemon juice. Blanket in a small square of pastry and cook in a hot oven.

spread with cream cheese, then with orange marmalade. Toast and cut in tiny pie-shaped triangles.

Melt one tablespoonful of butter in a loaf pan and sprinkle one quarter cupful of brown sugar, one quarter cupful of chopped nuts and one third cupful of chopped maraschino cherries evenly over the bottom. Sift the flour with the baking powder, sugar and salt. Combine the egg, milk and shortening and stir into the flour mixture, then add the bran. Pour the batter into the pan and spread evenly. Bake in a moderate oven (350 deg. F.) for 50 to 60 minutes. Remove from the pan at once. Makes one loaf about five inches by nine inches.

Cream the cheese and butter together. Sift the salt with the flour into the first mixture. Mix well. Roll out to one eighth of an inch on a well-floured board. Cut in circles. On one half of each circle put a half teaspoonful of marmalade, fold the other half over and pinch the edges together. Bake in a moderate oven (325 deg. F.) for 15 to 20 minutes. Makes about one dozen.

Cut the bread slice about 1 in. thick, trim and cut in squares. Dip in the chocolate, which has been melted over hot water. Then roll the chocolate - coated bread in the chopped nuts until completely covered. Cool before serving. Makes eight squares. 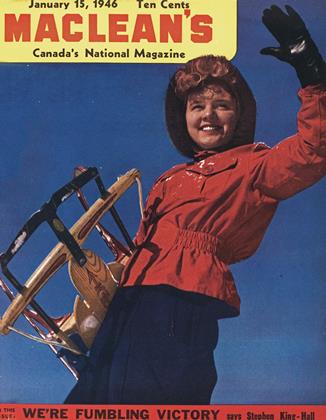