IN THE Editor's Confidence The Editors February 15 1946

FOR ALL the exhortation of the realists, who forever are prodding us into the future in a great swarm of helicopters, plastics, rockets and islands in the sky, this world will cease to be a really enjoyable place the moment there no longer are men and women who occasionally daydream and live in the past.

There’s no better illustration of that thought than our three fiction stories this issue. One is about a man who, they tell us, won’t exist in the future. At least there’s no provision on any blueprints we’ve seen for a man to live in a two-room shack and supply bed and board for stray animals caught by kids in the district. And you may correct us if we’re wrong, but the blueprints just as studiously ignore the inalienable right of one man to follow footprints through a desert and of another to swipe a beautiful girl and make a getaway by canoe. Just to emphasize the last of those points, we can think of nothing less romantic than eloping in a rocket ship.

If there hadn’t been those kinds of people in the haphazard world of yesteryear we wouldn’t have these three stories. For instance, Jean Howarth, Vancouver, drew her main character for “I’ll Wait for You all My Life” (page 10, winner of the $500 second prize in the Maclean’s Short Story Contest) from a man who used to live on Calgary’s North Hill, near her home. His shack was a hangout for all the neighborhood children. Once when they caught a coyote, which naturally would have been unwelcome at home, he provided the shelter.

She can’t take us much beyond that, because she lost track of him when he joined thé Calgary Highlanders in the first month of the war and went overseas a few months later. Also, because she now lives in Vancouver (28, unmarried, women’s editor of the Vancouver Province), she doesn’t know whether he came back. We sincerely hope that with the impetus given her writing by winning this prize, she’ll search back into other homes of her childhood— Pilot Mound, Miami, Harding and Minitonas in Manitoba and Bentley, Alta.—and find other people just as interesting to write about.

#And all you have to do is read a letter from Louis Kaye (“Story in Dust,” page 16) to know where he stands on the subject of progress. He’s a farmer in Tasmania, Australia, and he says that of all the things he’s done in his life he best liked working on Australia’s big inland stations (ranches).

“It’s pleasant to move around in the old slow way,” he writes, “and live in the land as you travel, so that you know it. Planes and cars get you there, but it’s the country on the way that I like.” And if he could begin again he’d like to be . . . “a rancher in that arid lonely land where Little Oombie walked—and still walks, although with a longer shadow—in the dust and the sun.”

Louis Kaye, incidentally, is a pen name. He wrote a number of -short stories for Maclean’s before the war and is author of a dozen novels.

% Theodore Goodridge Roberts is another old-time contributor to Maclean’s, as well as to just about every important magazine on this continent. His “The Night Before Waterloo” (page 20) is authentic old Canadiana. It’s about a time we never should forget, when bold men in swift sailing ships came to our east coasts on dark business known only to themselves, and departed just as mysteriously— occasionally with a daughter of our land.

Mr. Roberts is a younger (by 18 years) brother of the late Sir Charles G. D. Roberts.

0Dr. Clarence M. Hincks (“Sterilize the Unfit,” page 19) has an international reputation in the field of mental hygiene. He founded Canada’s National Committee for Mental Hygiene in 1918 and since 1926 has been its general director.

In addition, from 1930 to 1939 he was general director of the U. S. Committee for Mental Hygiene.

He relinquished part of this heavy dual duty in 1939, but still is field consultant to the American organization. He was born in St. Marys, Ont.; graduated in medicine from the University of Toronto; makes his home in Toronto; is married and has three children.

%A new contributor to these pages is Eric R. Adams (“Don Federico Sizes Us Up,” page 13). From early in 1942 to the end of the war he worked for the British Government in a hush-hush job in South America. His travels took him to every country there except Paraguay and Bolivia and gave him a soft spot in his heart for South Americans, who, he says, can teach us a thing or two. He’s 28, and is free-lancing now in Toronto, his home city. 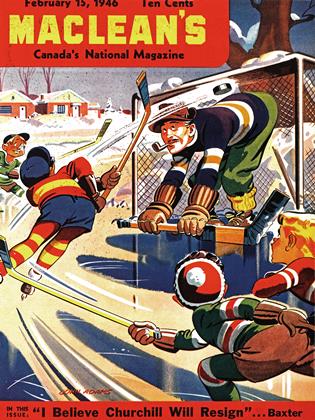