SO THIS was the United Nations Assembly, the offspring of the League of Nations that died in giving it birth. Belgium’s Paul-Henri Spaak was in the chair, his face a strange blend of cherub and poker player. It would be a good psychologist who could read his thoughts. There was Mr. Byrnes, with one strand of hair plastered to the top of his head. Human, friendly, puzzled and idealistic — in other words, an American. Then there was our own Ernie Bevin, a Vesuvius in a serge suit. And there were the Russians, calm, untroubled, like men who know they will be told by Moscow exactly what todo and need not burn the midnight candle trying to find where Wisdom has hidden herself.

My mind went back to February, 1920, when, as a fledgling reporter on the Daily Express, I was sent to cover the first General Assembly of the League of Nations at St. James’s Palace. There, in the great art gallery, were gathered the men who had come to speak for humanity, to blend sovereignty with the brotherhood of man, to give strength to the weak and conscience to the strong. Holbein’s painting of Henry VIII seemed to straddle the fine classic head of Arthur Balfour as, on behalf of His Majesty’s Government, he welcomed the guests. The French delegate sat opposite a portrait of Elizabeth, the Virgin Queen, and a Japanese spoke on behalf of Polish minorities.

It was moving, thrilling, impressive and it was ominous. At the top of the table there was an empty chair. America, whose president had demanded the League, was not there, in a tragic obsession with internal politics and with a sickening of European intrigues she had withdrawn from the world, like a nun vowed to eternal contemplation. It was the only empty chair, yet its silence was more eloquent than the tongues of angels. But there was an additional absentee: Russia, the revolutionary, the pariah, the social and political outcast, was not there for the simple reason she had not been invited. A League of Nations without Russia and America! The seeds of the next world war had been planted.

Despite this the hopes of men ran high, anti there were tens of millions of people who believed that on the shores of Lake Geneva there would be built the New Jerusalem.

And now, 2fi years later, I was looking at the delegates of the new league of nations, not assembled in the art gallery of a royal palace but in a Methodist conference hall. This time there is no empty chair, no absentee. America and Russia are not only in it and of it but are two of five pillars on which the structure is built. Then why not shout “Glory, Glory, Hallelujah!” and proclaim the dawn of 1,000 years of peace? If I had to give this Assembly a name I would call it

the “Conference of Shrugging Shoulders”.....shoulders

that shrug and hands which stretch out palms upward, as if to say in a dozen languages, “I ask you?” Gordon

Graydon, deputy leader of the Progressive Conservatives, who is here as a Canadian delegate, tells me the difference between the atmosphere of San Francisco and London is very marked. When the delegates met at San Francisco the war was still on, and the agony of death was inspiration, reproach, and challenge. The city itself was gripped in an almost revivalistic frenzy. Mothers wrote the delegates, saying they must not fail, and clergymen prayed for them. As in 1918, the heart of humanity was demanding an international organization to outlaw war. Perhaps because of that the Charter was finally finished, agreed upon and the foundation laid. That achievement was not easy.

When the Security Council was formed, with Russia, America, Britain, France and China as permanent members, Russia demanded that a veto of one should invalidate any decision to take military action or sanctions against an aggressor. Russia eventually had her way, for the simple reason there would have been no Charter and no Security Council unless she did. There was much muttering in lobbies and many hard things said behind closed doors, but one must remem-

ber the world is dealing with a nation which has no understanding of the rights either of a majority or a minority. If that seems paradoxical, look at the Soviet form of government—with one party in power and no opposition allowed to them there is no such thing as a majority or minority but only complete, absolute agreement. It is easy to be cynical or defeatist about this, but it would be wiser to remember we are all children of environment and habit. The Russians are crudely and ruthlessly logical at all times. I suppose we must try to respect their logic and regret their crudity and ruthlessness.

Stalin vs. the Army

WHEN UNO delegates left their various countries to assemble in London we were once more treated to what seemed another outburst of temperament by the Soviet. It was announced that Mr. Molotov was too exhausted by the ThreePower Conference in Moscow to come to London; instead he would send Mr. Vyshinsky to lead the delegation. One might have thought that it was Molotov, not Ernie Bevin, who had made the perilous air journey to Moscow and back to London through wintry skies. Yet here again I suggest we should not be too swift to accept the obvious.

It has been known for some time in political circles in London that there is a struggle going on in Moscow between the Stalin regime and the Army. Some of the more ardent generals are impatient of what they regard as the slow, elder statesmanship of Stalin, who they think has been spiritually corrupted by his contact with the western democratic world. In Russia, as in every country, there is a cry for younger men, and if rumors are true, Molotov’s ears are not closed to the siren call of the generals. Therefore it might reasonably be assumed that Stalin did not want Molotov to be out of his sight or that Molotov did not want to leave the situation at Moscow. It is never easy to find out exactly what is going on in the Soviet capital, but some opinion in London believes there is a silent struggle there which must come to a head one way or another. If this is true then it would account for the strange antics of Mr. Vyshinsky, who made as many false starts as a twoyear-old filly in a race.

From the standpoint of the normal international code of courtesy the behavior of Russia has been uncouth to a degree, but again we have to look at it against the background of the political scene in Moscow. This much is certain-the Russian delegates did come on time to London, and showed a far greater desire for co-operation than in San Francisco. What is more they had taken the trouble to learn English and French, thus shaming once more the Anglo-Saxon delegates, who put their trust in interpreters. Also the

Soviet delegates have been

helpful in many ways, although subject to sudden orders from Moscow which British and Americans—and possibly the Russians too—find hard to understand. Thus they opposed the election of Spaak as President, not so much to keep him out of the chair as to crack the whip and show their satellites in action. In the same way they opposed the election of Canada as an associate member of the Security Council, because they regard that Dominion as being the spoiled child of Britain and America.

But all these incidents were as nothing compared with the bombshell that came hurtling from snow-bound Moscow in the form of a demand that the United Nations should at once consider the actions of Britain in maintaining troops in Greece and Java to the detriment of peace and political settlement in those countries. This, of course, was absolutely in the Russian tradition of irony. Russians have always loved Dickens for his sense of caricature, and they have an almost childlike delight in blowing peas at a top hat. The Persian Government, encouraged by Britain, had asked that the continued presence of Russian troops in their country should be discussed—so why not throw the snowball back at John Bull? There is, of course, no parallel between the two cases. The British went into Java, in which there were large Japanese forces, at the request of the Allied Military Council. They went into Greece to protect their lines of defense, and afterward invited the Russians and Americans to join them there to secure a free and democratic election.

So, as I write these words, the enigma of Soviet Russia is the biggest problem facing the United Nations assembly. The League of Nations was launched upon a cloud of dreams. The United Nations Organization is launched on a sea of doubt. Yet it is honest doubt. There are some politicians who have already passed from doubt to complete cynicism, saying that Stalin is reproducing all the tactics of Hitler, and that eventually the western world will have to take a stand against expansionist Russia as it did against Nazi Germany. I would be reluctant to accept that view, although only a dreamer or a fool would rule it out as impossible. Remember that Russia has a genius for presenting herself at her worst to the outside world. Because her present ruling class has had no real contact with western civilization they have the arrogance of the parvenu. But perhaps that should be taken as an expression of temperament rather than of policy. Remember that if Russia went to war now or within the next two years the western democracies could destroy her cities in a week. Moscow knows that just as well as Paris, London and New York.

Yes, the birth of the United Nations has been accompanied by evil portents and thunder in the air, but out of sorrow and disappointment has the world been built. An organization for peace has been created and whatever the difficulties ahead life would be inconceivable without it. The League of Nations started with dreams and ended in despair. Perhaps this time we shall start with doubts and reach our dreams. I admit the Russian shadow lies dark and deep upon the scene, but we would be wise to wait until Moscow reveals its secrets before we assume that the shadow will never lift. 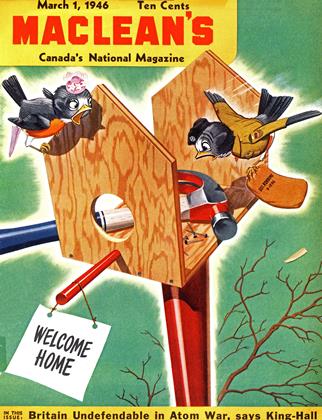