HIGH ABOVE the narrow thoroughfare of Montreal’s St. James Street, on the 19th floor of the Royal Bank building, operates a broker who deals exclusively in men’s minds.

On his office door appears his name, J. B. Fraser. For a decade now, at first in Toronto and since the war in Montreal, he has acted as private strategist for scores of men who regard themselves as, and who indeed are, the captains of finance and industry. Quite an impressive number of them now directing vast corporations have reached their high eminence through him.

Few outside this top executive layer know him or of him. But many of the old firma of the country—including the banka -deal with him.

On Fraser’s office door it is listed that he is an Executive Placement Consultant, and that he is affiliated with The Personnel Institute, Inc., Chicago. Actually he is the Canadian vice-president of the American concern.

Fraser says that he is not running an employment office, and he rarely has anything to do with jobless men. He deals with some of the restless, discontented, temperamental, moody, hard, shrewd, clear-thinking, brilliant men who are the guiding brains of what almost everyone calls Big Business. And with the lesser breed.

Every day executives come to him with stories of being misplaced, misfitted or underpaid, and he accepts

some as clients (some he refuses). In a little while he finds them something new at bigger money or where they are better suited. Or quite often, after testing them (we’ll come to that testing business), he tells them to stay put.

From $2,000 to $20,000 is the salary range within which he has found placements to date. He doesn’t do a great deal in the $2,000 class any more except when big companies ask him to find a group of men for, say, selling. At first he took a slice of a man’s salary but now, instead, he makes the corporation pay a straight five per cent of the first year’s salary.

Obviously the first thing you wonder about Fraser is why he doesn’t pick off a rich plum for himself. His business, which was crippled by the war, paid him in 1945 an income which he says was in five figures. But even if the returns were not rich it is probable he would stay at it. There is for him a compelling fascination in selecting men and placing them in high positions and watching if they succeed and push on or falter and fail.

One of his clients is L. E. Wicklum, president and managing director of Frederick Stearns & Co., Ltd., Windsor, Ont., one of the oldest pharmaceutical manufacturing firms in Canada, now a subsidiary of Sterling Drug Inc., New York. Wicklum’s is a good sample case of brain brokerage.

When he first met Fraser, back in 1941, Earle Wicklum was a salesman on the road for the Stearns Company, and Fraser says he was a driving go-getter. But he was dissatisfied and felt he had executive ability which was being overlooked. Fraser placed him as general sales manager of the Canadian General Rubber Company, Galt, Ont. Wicklum remained in the new job just over a year and in the meantime Stearns was bought up by Sterling and a reorganization took place. Two jobs were now open — general sales manager and managing director. To young Wicklum the reorganized drug company offered the position of general sales manager.

Wicklum consulted Fraser and the sum of his advice was, “Go back and tell ’em you want the bigger job, managing director.” Wicklum did and today is president. He has not yet reached his 35th birthday. There is, of course, a good deal of affection between the two, and Wicklum proclaims Fraser and Fraser’s services as an asset to any modern business.

Fraser, now in his fifties, looks the way you expect solid, conservative businessmen to look in St. James Street. He is a quietly tailored grey man who talks softly and influentially and without high pressure, so that his ways are convincing. His aptitude

testing and “personalysis”—the analyzing of a client’s personality, whether an employee or employer—are still highly suspect in some quarters, but there is quite a weight of evidence on the other side too.

Fraser admits to talent for placing the right man in the right job, but he also admits making “some serious mistakes.”

He is shy of women clients because, he says, in Canada it is difficult to get management to give women positions of responsibility. However, the one woman client he did handle was a huge success. Her name was Mary Murphy, a Canadian who had wide experience in New York and Chicago department stores. She wanted to come back to Canada — to Ottawa — because her mother was ill there and could not move to the United States. Fraser approached the deal with some apprehension, but finally placed her with one of Ottawa’s biggest department stores, A. J. Freiman Company, as merchandising manager. “She earned a salary and bonus that would be the envy of most male executives,” Fraser says.

The Fraser technique involves what he calls “scientific selection” in delving into an executive’s personality, brains and general ability. When Fraser accepts a man as a client he asks, and gets answers to, questions that are brutally frank about such things as liquor and personal habits. Whole batteries of tests are made on a single client—for big jobs nine of them, for lesser jobs six or three. One questionnaire alone contains 125 questions, another 75, another 50.

He will ask what you do for amusement. When you have answered he will then searchingly demand what you did last Monday night, and Tuesday, Wednesday, Thursday, Friday and Saturday night. He asks what was your father’s vocation and then asks if he was a moody man or pleasant, harsh or kind; if your mother was generous and gentle, nervous and mean. The questions go on and on and on, and on. Like any employer he is concerned with your personal appearance, but that is only a beginning. He proceeds to examine your voice, your poise, your state of confidence, your ambition, your emotions.

And when he has all the answers on paper he packs them off by air to The Personnel Institute in Chicago, and they turn his reports over to their psychology department for analysis. Fraser, how-ever, gets no direction from the Chicago office. The psychologists’

analysis is for his own and for the employer’s guidance. Fraser does the selection, and tells the employer of the strength and weaknesses in character which the analysis portrays, and delivers his judgment as to whether or not the man fits the job.

J. B. Fraser was born in Woodstock, Ont., and until he went into business for himself he held a number of sales, promotional and executive positions with both American and Canadian companies (in Toronto, Hamilton, London, Ont., and Detroit, Mich.) He got his start as an employment counsellor after he had set himself up as a merchandising consultant in London, Ont., to a group of food product companies. Occasionally, to his dismay, he found he had to recommend to his chiefs the dismissal of men from various positions. His concern was that quite often they were excellent men improperly placed. In one instance there was such a howl of protest when he proposed firing an executive he decided he’d get the man a better job and one

to which he was better suited. He did, and pleased and surprised everyone concerned. This was a provocative and significant incident, and soon after several friends asked him to quietly help them change jobs. One day in February, 1936, Fraser boldly walked into the advertising office of a Toronto newspaper and paid for an ad one column by two inches in depth. It proclaimed: “I can help you get a job.”

That, of course, was a startling ad in the year 1936. Business boomed, though downright suspicion met him in many offices. The years marched, gradually business leaders changed their opinions. Fraser opened a big suite of offices in Toronto, a second office in Montreal.

Fraser’s idea of a good executive is: “A man who can get the people who work with him to do what they’re supposed to do effectively and enthusiiastically, without compulsion.! Any fool with authority can compel those under him to do what he tells them to do, but he’s piling up future trouble for himself by using such methods.” 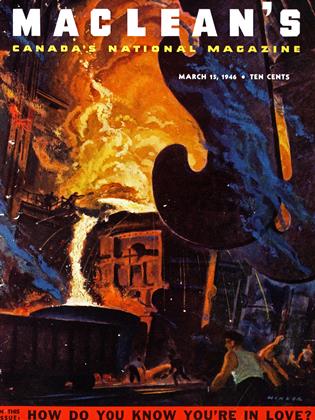