A FEW days after the Allied invasion of North Africa, General George C. Marshall, chief of Staff of the United States Army, was holding a

press conference at the St. George Hotel in Algiers. About 60 war correspondents were present, and Marshall opened the conference with these words: “To save time, I am going to ask each of you what questions you have in mind.”

Every correspondent asked his question, and then Marshall began a talk which lasted about 40 minutes. During this interview he answered every question which had been asked. But the most astounding fact was that whenever he answered a question he looked at the correspondent who had asked it, indicating that he remembered not only the question itself but also the man who had put it to him.

Frederick C. Painton, who related the story, concluded by saving: “All agreed on one thing: ‘That’s the most brilliant interview I ever attended in my life.’ ”

Even more famous than General Marshall’s memory, however, is James A. Parley's, the former U. S. Postmaster General. Farley remembers not only people’s faces but their names as well. It is generally believed that his ability to remember every person lie meets, and to call him by name, contributed in some measure to the presidential election of Mr. Roosevelt in 1932. Farley managed Mr. Roosevelt’s campaign, and in the course of it made many trips through the United States. Whenever he met a voter for the second time he recognized his face and called him by name.

The lack of a reliable memory is not only extremely annoying; it can be a severe social and business handicap.

But memory can be trained. There are many methods. One is to increase its natural power. Another

is to use artificial help, which serves the same good purpose as do eyeglasses for a nearsighted person.

One most difficult problem for persons with average memory is numbers—yet being able to remember numbers can make it easy to recall names, places and things.

The easiest way out is to transfer numbers into words. In order to accomplish this we must first translate the single digits into consonants, and we accomplish this by use of the following simple code:

“1” is indicated by the letter t, because t has one downstroke.

“2” by n because n has two downstrokes.

“3” by m because m has three downstrokes.

“0” by z, because z is the last letter in the alphabet; and the word “zero” begins with a z.

ONCE this principle of substitution is clear, it is easy to extend it to all consonants. For our purposes all letters which sound somewhat alike are considered identical. We can therefore extend the above substitutions as follows:

Hard g is found in such words, as good; soft g in general; hard e as in card; soft c as in ceiling.

Throughout the system we use only consonants. The vowels have no numerical values, and we are therefore entirely free in using any of them. Look at f lie following words:

If, using the code previously given, you translate only the consonants and disregard the vowels, you find that these words represent the numbers from one to 10. By use of the number code it becomes easy to extend this list up to 100; however, the 10 words given above are enough to show you how this list may be put to practical use as an aid to remembering.

SUPPOSE you are going to give a party tonight and you have to run errands for the following items: cake, cigars, flowers, butter, meat, eggs, sugar, caviar, chairs, and a camera for taking pictures of the party. Let us further suppose that these items are arranged in the same sequence as are the stores in which you plan to buy them. The correct sequence is, then, especially important, since you will have to run back and forth if you forget any item.

Furthermore, you don’t want to write anything down, because you know that writing down everything instead of remembering it means damaging your faculty of memorizing things instead of training your memory. Since you are entirely familiar with the list of words we gave you above (starting with “tea”), it is easy to remember the errands by forming associations with the list. You can do it in the following way:

1. Tea—cake. Imagine a tea table with a big birthday cake standing in the middle.

2. Noah—cigar. Try to use your fantasy and to visualize old man Noah with a long black cigar in his mouth.

3. May—flowers. The association is easy, because May is the month in which we find beautiful spring flowers.

4. Ray—butter. See the butter melt under the rays of the sun.

5. Law—meat. The sale of meat is still rationed by law.

eating eggs. It does not really matter that Bernard Shaw is actually a vegetarian. Memory for the average person is perhaps 80% imagination and 20% logic.

7. Key—sugar. Nowadays sugar is so precious that we must almost keep it under lock and key.

8. Fee—caviar. For caviar, particularly genuine caviar, you must pay a high fee.

9. Bay—chairs. Imagine yourself sitting in an easy chair, admiring a beautiful view of a bay.

10. Tease—camera. Imagine that you are taking funny pictures to tease your guests at the party.

Now test yourself by looking at the words from tea to tease and see whether you are able to recall the 10 errands which you have to do. Consider that every student in memory training knows by heart not only these 10 words but 100.

The number code can be applied in every instance in which numbers have to be remembered; that is, in history, geography, price catalogues, etc. It can be applied to telephone numbers in the following way: In Montreal the number for the Canadian Pacific Railway is PLateau 2211. A sentence which makes it easy to remember this number would be: “The

Canadian Pacific Railway travels over the plateau at noun today.”

Plateau stands for the exchange. Noon today = 2211. The Bank of Montreal, on Montreal’s Place d’Armes, has the number PLateau 2121 and could be easily remembered by the sentence: “At the Place

d’Armes we can see the bank end to end.”

Place stands for PLateau, since we need only the first two letters to dial the number. End to end =

Has stands for the exchange HArbour and is sufficient, for the reason given above. Tenant — 1221. This is one of the rare cases where it is easy to find one single word for the translation of a four-digit number, whereas usually two words are necessary.

The Quebec Liquor Commission: CHerrier 2121. “People who like liquor intend to cheer up (by drinking).”

Cheer stands for Cherrier. The fact that in this sentence cheer is behind the word “intend” is of no consequence, because we know that we have to dial the exchange first. Intend — 2121.

In Toronto the T. Eaton Co. number is TRinity 5111. Your “memory

Three stands for “tri” in Trinity; it can be used only by somebody who knows the Toronto exchanges, but for somebody who does it is easy to remember due to the similarity of the sound. Lady date — 5111.

A visitor in Toronto, unfamiliar with the exchange and worried that he might dial “TH” instead of “TR,” might prefer the sentence: “Try a lot (of food) today.”

Try stands for TRinity without the danger of confusion. Lot today — 5111. This sentence is closely associated with the firm concerned, since the name Eaton reminds us of “eat”; nevertheless I personally would prefer the first sentence.

In the case of a price catalogue, the number code can be applied in the following way to prices which I noticed in this morning’s newspaper:

If it is necessary to remember not only dollars but cents as well, it can be accomplished in the following way:

*If a word has more than three consonants, only three are counted.

At first, all this rigmarole may seem like a lot of work in itself, and you may ask, wouldn’t it be easier to remember the numbers themselves? But note that basically, all you actually have to remember is the simple number-letter code—“2” equals n, “3” equals m, etc.—and even here there are “memory hooks” in the fact that the two downstrokes in the letter n remind you of the figure “2,” and so on.

Once you have the code safely in your head, all the rest follows through simple association of ideas. That’s why words are easier to remember than numbers— you can picture the word which with the code gives you the number. Moreover, any number of one, two or three digits can be represented by 20 or 30 different words, so that in almost any instance you can select a word which will give you an association of ideas easy to recall; but once you’ve chosen your word, it can be translated to give you only the particular number you wish to remember.

The possibilities of extending the number code and its usefulness are almost unlimited. For instance, for appointments, dates and assignments you can enumerate the days of the week: Sunday becomes 1, Monday 2, and so on. You’ve got an appointment to see a customer who is a mattress manufacturer at 9 o’clock Monday. Monday gives you 2, the hour is 9, and, in combination, “29” gives the code word “nap”—an idea easily associated with the man’s business.

Here are some practical examples of how the number code is put to use by my own students. One of them, a travelling salesman, keeps a mental diary for all his activities—where he has been, what he has seen, what transactions he has conducted, and the like. He is able to recall every customer, along with the merchandise he bought, his hobbies, worries, and family; in short, everything this cus-

tom er talked about to him on his last visit. The salesman can recall these things not only when he pays his next visit to a customer (when he can prepare himself by using a notebook) but also when he meets him in the street or when the customer unexpectedly calls on him.

There is a hotel manager among my students who took the course because he had difficulty with his job, due to his inability to recall the guests. Today he readily recalls their names and the numbers of their rooms.

There is an advertising manager who

is able to recall every rate of every newspaper in greater New York. Consider the fact that there are over 30 newspapers and that each of them has more than 10 different rates. The good impression which any such feat makes on a customer, a hotel guest, or a businessman who wants to buy advertising space can hardly be overestimated.

Of course the number code is not the only method of training memory. But it shows that the capacity to which we can increase our memory powers is almost unlimited. 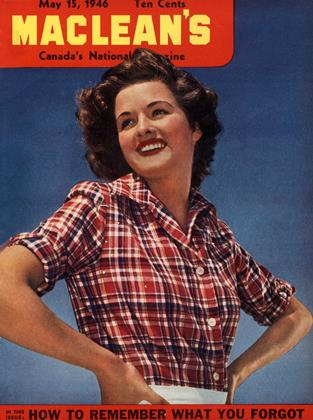