MAYBE IT was because he was so old that Dave Freedman didn’t care. Oh, very, very old— old enough to remember that twice his government and his people had gone all out in effort and sacrifice to win a war to end wars.

Twice in the same generation: The War to Save Democracy. Save it for what? To get it blown up with the last disintegrating atom?

Certainly he hadn’t always been so cynical. Like a man already dead, feeling no fear, no hope, no excitement, no curiosity—nothing. As short a time as last year, with a China command, the lust for living had burned through him like a magnesium flare.

But now, slumped in his seat in the Government’s hastily requisitioned C-54, Dave stared at his distinguished cabin mates with a kind of pitying wonder. All these young men with the brains in their heads and the light in their eyes: electronics men, supersónica men, rare-earth chemists—men of the uranium age. All these bright young men who couldn’t remember any farther back than one war—Oh, yes, and the bright young woman, the expert on Soviet economy, from the University of Chicago.

They were as unrealistic in appraising the airplane’s chances as they were in gauging the world’s potential for self-destruction, and the hope that burned so unreasoningly in their eyes galled Dave Freedman so that he wanted to shout:

There had been a time when Dave and all of them in the plane could have lived. It had been theirs to choose. With the two inboard engines laboring, choked with the frozen spume that beat down from the Aleutians, they had called an emergency meeting. As the patriarch of the Commission he had been recipient of the crewman’s terse report:

“We can turn back and thaw out the carburetors. But if we do that it’s doubtful if we’ll have enough gas left to head around again and finish the trip. We’re nearly to our point of no return.”

“And if we don’t tum back?” Dave put the question which gnawed at them all.

“Well, we can take the plane down close to the water. Go in on the deck, as we call it. In the warmer air there it may be that favorable enough conditions will obtain . . . it’s possible—”

“And going on the deck, as you call it—if we don’t regain our manifold pressure there, we just keep settling lower? The engines won’t have the power to pick up altitude again . . . we’re sunk—”

“We’re sunk, sir; you said it. We just go on skipping waves till the one we don’t skip smacks us down.”

In the best democratic tradition, Commission members and crew, they had taken a vote. All these young fools with the lights in their eyes had voted to go on. Oh, he had Continued on page 28

voted with them, of course; what the hell!

“The world’s emergency merits any ! risk,” one of the young sober faces had said stuffily.

I including this control commission in a world where apes cracked atoms like I coconuts and looked beyond their • native jungles for the Fascism feeding in their own treetops?

There had been an animated bit of comment about this “point of no return” touched upon by the crewman.

I tank capacity ... all those things j contributing to make it a different j point for every plane on every trip—”

I That was the nuclear physicist ! speaking. He pushed the fragile thought with the eagerness any one of them might have shown in detailing a way of saving the world from something. “In a way, fanciful. The point of no return—”

“A simple thing though,” a colleague observed. “Clear-cut. That point at which you haven’t enough gasoline left in your tank to let you turn around and go back—”

Well, it had turned out to be worse. The pilot had brought the plane down to 200 feet, but the change in altitude hadn’t taken the death rattle from the engines. Inexorably the transport was drifting lower.

The bright, young men weren’t talking so much now. Their mouths were tight, their faces a little grey. But the light was in their eyes still. No scientific justification for it. Unbounded infantile optimism, that was all. Dave wondered if even in his own star-soaring days he had been so blind.

With the edge of his hand he kept swiping at the window, as though by j the action he could wipe the outside j scud away. In a hole wind-driven j through the fog he caught his first j glimpse of the water, bulked in ragged j grey furrows, like the titanic loom of I granite in the Rockies. There it was, j reaching to absorb the plane in its cold I immensity ... the pilotdoing the best he j could, and his best not good enough j . . . the strangled engines still lowering I their burden.

The point of no return. Different for every man in every manner of life. Environment, heredity, temperament, the breaks you got. Fanciful, maybe; but clear-cut and simple when you shook it down; that point at which you hadn’t the will to keep on trying.

Dave Freedman had reached it before today.

Three years of mud and blood in the middle of China, responsible for material so heartbreakingly, bodybreakingly brought in over the Hump . . . and half of it pinched off by the little war lords on its way to the big war lord, and the big war lord squatting over the rest of it like a stone idol, letting the war rage around him; waiting, waiting, waiting for the white devils to finish saving his country and get out, so he could start the weary business of playing war with his own people all over again.

But it had taken more than the tragic muddle in China to bring Dave Freedman to his own private point of no return. It had taken a reluctant belief that peace was everywhere on the bargain counter, with good will hawked in the world’s black markets. And it had taken, at the last, a woman. His wife.

Soft eyes Elsa had, and lips, and a body that even when she wasn’t moving was like something flowing. But she had firmness too. She knew what she wanted, and for 10 years what she had wanted was Dave Freedman. Ten years. That’s if you counted the three war years he had spent away from her, holding her image in his heart and mind, and living for the time he would see her again with his eyes and mouth and fingers. His wife and the children of their inordinately happy marriage— his focus of sanity in a careening world where the end of the war was not, it seemed, the beginning of peace.

The cool lips talking; the careful, almost aggrieved tone: “Do you think it was easy for me to make the decision? I should think you’d appreciate my position, Dave. Particularly after how I so carefully considered yours, writing nothing to disturb you while you were away. But now you’re home. The war is over. We can sit down and discuss a divorce like rational human beings—”

Was there anywhere a rational human being left on this earth?

“ . . . Please let’s have as little fuss and unpleasantness as possible. For the children’s sake—”

On the snapshot taken before he

went away there were stair-step youngsters, aged two and four and six.

“If it’s the children you’re considering—”

She stopped him effectively. “Please, Dave . . . three years. It would be an adjustment for them to make in anj' case.”

So that was that. Your children, as well as your woman, could grow right out of a snapshot and become people you didn’t know.

Sock number two. Next day. The laboratory. Boy, were they ever glad to see him back! They pumped his hand off. Cigars from the chief’s humidor. Scotch from his tricky built-in cabinet. Have a cigar . . . have a drink. Three years . . . you'll find things a little changed around here, but you’ll catch on again. Sure. You’ll catch on!”

And a job at nowhere like your old skill or your old salary!

Now, in the stricken plane, he could look out the window and see the ocean come and go through the fog, so close now it seemed that the next wave, or certainly the one after, must reach up and claw the belly out of the cabin. So why didn’t somebody tell that pilot it was all over? Quit drawing out the agony; shove the stick through the board and make the dive.

He looked at his wrist and he could see the tiny pulse. A perfectly normal pulse. And under his load of clothing he wasn’t even sweating. Not fearsweat. No, he wasn’t afraid to die. That was one thing in favor of having nothing to live for—that you weren’t afraid to die—

Wait! For a heartbeat there. Hadn’t the engines seemed to throw off the choke hold . . . give out with their full-throated roaring? The plane— hadn’t it seemed to gird itself, find a groove in the air? For just a second?

He was sweating now all right, hot and sticky everywhere under his clothes. A man was a fool who said he

was not afraid to die. And this heartj skip hope just, now—no basis for it. The engines were wheezing still, the plane still wallowing.

It had been like that interval of bright hope when he had received the Government’s appointment to this Atomic Control Commission. A job he could do and do well. Precise knowledge he could contribute. But his elation had been brief. When he had started to think about it, was there any trust, any co-operation, any faintest light in the darkness anywhere? Hamstrung by the special-interests men, and by all those well-meaning folks bogged in tradition, wouldn’t the Commission bleed out its life in endless bickerings?

Oh, he had come along for the show, but with strictly limited illusions as to what he might accomplish. What could one man do? What was the use of trying?

Curiously, then, he wTas aware of a quickening, a dynamism that pervaded the cabin . . . and wasn’t he hearing the engines’ sustained and mellow throbbing? Incredible, but— wasn’t he?

The talk of the young men came to him in snatches, sharp and scraping— exultant: “The pilot never quit trying. He didn’t know he was beaten . . .

A dangerous expedient, so close to the water in this fog. But the only way. Just warmth enough at water level to thaw out the engines. We’ll wave hop till we get out of this . . .”

Another voice reached him too. A voice from the China of yesterday. It laved with its cool and quiet wisdom the appalling muddle that was today’s China, thatwas today’s world; a voice of infinite patience . . . the voice of the prophet, Confucius: “It is better

to light a small candle than to wail at the darkness.”

Dave Freedman stretched out his j long legs, relaxing, and he felt all at once as young as the young men with the light in their eyes. 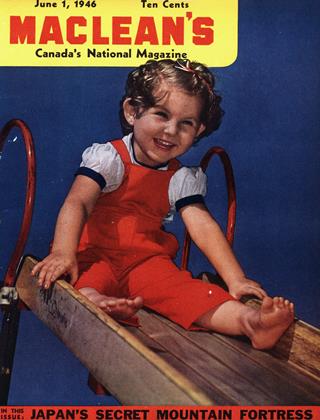