WHETHER this Parade will come swinging down your street on Dominion Day or Canada Day remains a moot senatorial point as we go to press. Certainly the Senators weren’t the only troubled citizens as Canada concluded its 79th confederated year. To wit:

The Ontario clergyman, called to a new charge, who left his old parish short $800 in back salary, consoled only by a farewell party at which a young lady sang, “God will take care of you.”

The 13-year-old Vancouver cyclist who, when caught by the handle of

an opening car door, found himself sprawled on the road in front of the Hotel Vancouver—his trousers left behind on the door handle.

And Mrs. W. Dzuranuk, Edmonton, who wrote city council an impassioned plea against adoption of daylight saving time: “If you vote

this thfng through, bear in mind that working men do not play golf, and from 3.30 p.m. have lots of time to put in idle. So the hotel seems to be the only place to visit and cool off. The result is staggering, and so is many a man home to supper.”

The writers up front in this magazine beat the big drums with their feature articles; bringing up the end of the Parade we sometimes catch the offbeat murmurs of the watching throng.

Take that piece a couple of issues ago about the weatherman and the improved forecasts he’s handing out to the papers. Well, we’ve learned since he’s wasting his time on the Sault Ste. Marie, Ont., Star.

Last March Sault Star readers were startled by the appearance of such breeze-happy bulletins as “mostly damp” . . . “snow, some blow”

Then came the change in weather forecasting policy. It was all to be very scientific—but maybe the Sault Star wasn’t listening. Some recent Sault forecasts: “No rain, it sez

And after Gord Sinclair wrote about Jack Bowser, the Aurora, Ont., farm boy who bossed construction of the Empire State Building and a bunch of modern office buildings in Tokyo, we heard the real lowdown on Bowser from an Aurora housewife. She got it from her cleaning woman.

“A smart boy, that Jack Bowser— and many’s the time I’Ve dandled him on my knee,” declared the domestic aid. “You know, once they got him to go way over to China to help them with some Great Wall they was building!”

When the Orangeville, Ont., chapter of the IODE announced a white elephant auction, one Daughter of Empire cunningly camouflaged in several layers of brown paper one of those large, pearly conch shells that used to head the hit parade on grandma’s parlor table. Tucking the bulging bundle under her arm she set off on a few shopping calls en route to the meeting. Later, at the IODE hall, she sat back to enjoy the fun as the Chapter’s witty regent waved her auctioneer’s gavel over ' the brown-papered offering.

“Ladies, we have here a beautiful rump roast of beef,” announced the auctioneer merrily, “just what you want for your Sunday dinner. What am I offered?

Despite this come-on the bidding was disappointing, and the item was knocked down to a member for 15 cents. She tore off the paper and

stood there gaping at a rump roast of beef.

They never did find out at what point along shoppers row the parcels got switched, or what irate housewife was out a roast and in a conch shell. 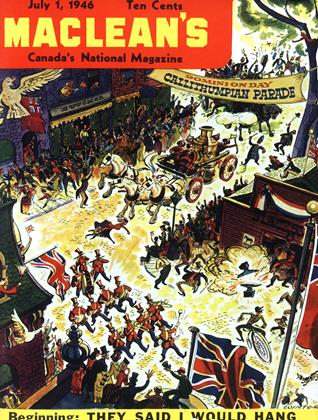