BIG Spanish and Portuguese Diesel trawlers, back on the high seas now that the war is over, are driving Canadian schooners from the Quero Banks, 160 miles off the Nova Scotian coast.

According to the Canadian skippers, the Spanish and Portuguese ships, 10 to 12 times larger than their own, threaten them with collision and destroy their trawls and other gears. Said one Lunenburg captain, “They come so close to us you can almost throw rocks on their decks.” As a result* 14 Nova Scotian schooners have moved their operations to the Grand Banks, 300 miles farther away and considerably less profitable. Skipper George Himmelman, of the schooner Lilla B. Boutilier, said, “My livelihood was on the Quero Banks, but now it’s gone.”

The Federal Ministry of Fisheries has ordered an investigation. Schooner men from Lunenburg, Shelburne and other fishing ports want Ottawa to follow the American example and proclaim Canadian sovereignty over the whole Continental Shelf off our shores. That would make the Atlantic a Canadian ocean out to where the deep water begins—about 200 miles off Nova Scotia. * * * The bottom has dropped out of the herringscale market. In the eyes of New Brunswick fishermen the herring’s overcoat is just about back to its pre-war status—a near-worthless nuisance. Before .the war herring scales brought about three cents a pound. Then the price began to go up. A wide variety of uses was found for processed herring scales. The biggest demand was for pearl paste, which went into costume jewellery. Then the United Continued on page 43

States Navy discovered that the scales —processed, of course—were top-notch fire extinguishers. The price skyrocketed, until the scales were worth more than the fish themselves. For one dizzy period the price hit $3.50 a pound, and small fortunes were made.

This spring, with a falling-off in military purchases, the bubble burst. And the price slumped to 10 or 12 cents. The fishermen are talking about organizing to get a fair stabilized price all the time now that the worth of the scales has been established.

Prompted by Church authorities, Montreal police have resurrected a 15-year-old law to open a “purity” campaign against advertisements, theatre signs and store displays they consider suggestive. Photographs, statues, magazines and billboards depicting nudes or seminudes are out. From now on all billboards, posters and other illustrations must be submitted to Police Director Fernand Dufresne for approval. Fines of up to $40 and jail terms up to 60 days face those who ignore the law.

Sergt. Detective A. O. Pelletier of the police “censor” squad is directly in charge of the new drive. So far advertisements for bathing suits, motion pictures and women’s undergarments have occupied most of his attention. One well-known garment advertisement was made presentable by slapping the trade name of the product over the part of the illustration to which the censor objected.

Quebec has no coal, but it has peat bogs. With an acute coal shortage in sight next winter, provincial officials are planning a survey of the peat situation to see what can be done to revive an industry which hasn’t flourished since before the last war.

There are thousands of acres of peat in Quebec. Some of the bogs have been worked in the past, but great areas along the Ontario border are untapped. Put up in briquets, peat would make acceptable fuel for city use, officials feel. Right now it is so neglected that many bog owners aren’t even using it in their own stoves—they’re burning that other scarce commodity, wood.

By the end of this summer Hans Lundberg, Toronto geophysicist, should know whether his scheme for prospecting from a helicopter really works. He headed an expedition into Northern Ontario and Quebec last month which he hopes will revolutionize surveying methods and open up hitherto impenetrable mining fields.

Mr. Lundberg and his engineers have devised electronic instruments designed to measure, from the air, the magneticintensity of the ground underneath. When this intensity varies abruptly there is a good chance that an ore body, lying somewhere beneath the surface, is the cause of the jump, or “anomaly,” as the geophysical prospectors put it.

ciple to detect submerged submarines, and this system is also being put to work in American oil fields to locate conditions where oil formations are likely to exist.

Mr. Lundberg began his tests last month in the Sudbury zone, where known ore bodies are located. Then he hoped to strike out into more remote areas. He expected to prove that geophysical surveys by helicopter can be made 500 times faster than by ordinary surface methods.

Northern Ontario’s gold high graders have had to take a back seat this summer to another type of pirate—the fur runners. Game wardens have been working night and day to smash an epidemic of fur poaching. No sooner do they break up one ring than another takes its place.

Seizures of illegal skins, sometimes worth as much as $20,000, and stiff fines have failed to halt the fur runners, who are lured by the highest prices in years. The officials know that furs worth hundreds of thousands of dollars are being run from Ontario to Quebec, where, fur dealers say, it’s a cinch to dispose of “hot” skins. Beaver, especially, are being trapped illegally in such numbers that conservation authorities are deeply concerned.

A gangland note entered the picture when the body of Dan Tessier, a trapper from Dalton Mills, was hauled from the Jackpine River with bullet holes in his head and neck. Tessier had helped game wardens catch several men accused of poaching.

Three thousand Winnipeg citizens gathered before the home of Mr. and Mrs. A. I. Slotin, 125 Scotia Street, one day last month to attend an open-air funeral service. They had come to pay their respects to the memory of Dr. Louis Slotin, a brilliant 35-year-old physicist, who’d died one of the first heroes of this Atomic Age.

Dr. Slotin, a native of Winnipeg, had been a scientist at the U. S. Government’s atomic bomb laboratory near Los Alamos, New Mexico. When, by accident, a pile of fissionable material got out of control and started spurting deadly radiation, Dr. Slotin placed himself between the pile and his coworkers and scattered the radiating material. He saved his colleagues’ lives but suffered burns from which he died nine days later. His body was flown to Winnipeg for burial.

Dr. Slotin took his B.Sc. from the University of Manitoba and his doctor’s degree from King’s College, London. He became an assistant professor of physics at the University of Chicago, and had been in atomic bomb research there since 1942.

Rescue wheat, a strain developed by A. W. Platt, an agricultural scientist at the Swift Current experimental station, promises to lift the curse of the sawfly from 13 million western acres. General distribution is expected in 1948.

there is no stubble left to protect the soil from wind erosion.

Rescue’s stem, however, is too tough for the sawfly. Rescue yields well, and is earlier than Marquis, but has one drawback not yet overcome—low grading. It does not rate above No. 3 Northern.

It was Dr. Hilts’ Day in Kennedy, Sask. For 40 years the villagers dt Kennedy (pop. 237) had been taking orders from Fred Hilts. This day they handed out the orders. Their prescription: a $500 gift and a holiday.

More than 1,000 people from the village and district turned out for the celebration, and a good many of them were Dr. Hilts’ babies or babies of his babies. The 68-year-old doctor almost missed the doings; just before the ceremony began he got a call to deliver another baby.

Right now the 800 locals of the Alberta Farmers’ Union are conducting a strike vote. If more than half the locals decide on a walkout, delivery of food from Alberta farms will shrink to a trickle. When the poll began in June, AFU officials said it would be some months before a final decision would be known.

Cross-country horse races have been growing in popularity at country fairs and stampedes in the western United States and Canada. This spring the Western Riding Club of Midnapore, Alta., staged a most successful 30-mile event. It’s likely it was the longdistance race to end all long-distance races as far as Alberta is concerned.

Fifteen horses finished the Midnapore grind. The winner, Skipper, with Floyd Haynes up, covered the 30 miles in 1 hour, 41 minutes, 18% seconds, eight minutes better than the previous world record, and several other horses also did better than the record. But one horse dropped dead from exhaustion and three others had to be destroyed.

A storm of protest rose in horseloving Alberta. The Calgary Branch of the Society for the Prevention of Cruelty to Animals called a special meeting to oppose any future longdistance horse races.

The Midnapore club promised to sponsor no more such events, and it’s unlikely there’ll be any others in the province.

The city of Vancouver managed to glean one benefit out of the many inconveniences (newspaper sizes cut, shortage of wrapping paper, fruitpacking boxes) which afflicted the coast during the strike of 37,000 lumber workers—the city at last got rid of its wooden white elephant, a three-year-old 40,000-cord woodpile.

The firewood was cut by Japanese and conscientious objectors when a fuel famine threatened in 1943, but conditions improved before it could be sold. Now the prospects of a fuel famine are very real, and the 40,000 cords of deteriorated wood were snapped up at $7 a cord.

For a century Ripple Rock has been sinking ships. Since 1942 the Federal

Government has been pecking away at it with drill and dynamite. Now, despite anguished outcries from Seattle to Alaska, Ottawa is calling quits and putting its drill gear up for sale. Spent so far: $802,825. Results: practically none. Estimated sum to complete the job: 1% to 2% millions.

Ripple Rock, a submerged pinnacle 175 x 250 feet, stands in Seymour Narrows, between Vancouver Island and the mainland, athwart the busy Inland Passage to northern B. C. and Alaska. At low tide it’s only 10 feet below the surface, and when the 14knot tides race through the Narrows they boil over Ripple Rock in a whirlpool that has wrecked many a large ship and is almost certainly fatal to small craft unlucky enough to be caught in it. Drilling and blasting in this tide race was difficult and dangerous.

Each year 1,500 large and 5,000 small vessels brave the passage. When the Government stopped work, their owners, the ports they hail from and the ports they call at all protested. Suggestions were offered for removing the Rock. They included: 1. tunnelling

under it from the shore; 2. dropping an atomic bomb on it.

When Ottawa’s interest in the Rock flagged in 1944, it was revived when the Dominion’s own hydrographic ship ran against it and was badly holed. The coast wonders what will have to happen before the Government determines to finish the job.

The high price of furs, blamed for the poaching outbreak in Northern Ontario (see Ontario), is pouring a flood of gold into the pockets of trappers across the country. At Fort St. John, a mere dot on the map of northern B. C., more than a quarter million dollars was paid to trappers for their winter’s catch—an all-time record. Prime beaver pelts brought around $60. Some of the trappers in the big money cleared $6,000 for a winter’s work.

Last fall Joe and Henry McLeod sold their farm to finance their trap line. This spring the brothers sold their catch for $8,000, bought their farm back, and cleared a nice profit. 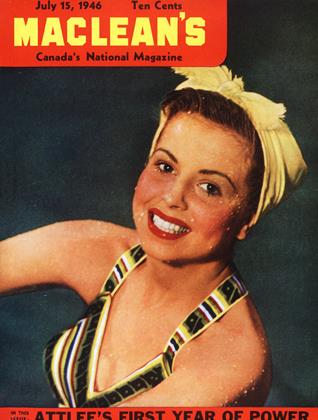