THE COST of living is the most worrisome problem of many Americans this summer. It rose gradually but markedly during the spring months. After June 30, when the Price Control Law expired and President Truman vetoed the first substitute offered by Congress on the ground that it “legalized inflation,” the cost of living shot up. The rise was sharp enough to evoke a second thought from Congress. It offered a second substitute, still weak but strong enough to win Mr. Truman’s reluctant approval.

The extended, and diluted, Price Control Act is preventing uncontrolled speculative price increases in many commodities and finished goods. Government economists, however, are predicting a further rise in the cost of living of from 10 to 20% by the end of the year. Part

of this will not be attributable to weak price control. It will be the unavoidable result of the handsome wage increases—from 15 to 20% in basic hourly rates—granted last winter and spring.

The thesis that wage increases of such magnitude could be made without raising prices has long since been renounced by the officials and economists in the Government who advanced it shortly after V-J Day. Up the spout has gone also the thesis that reconversion from war to peace would be attended by extensive unemployment. For various reasons, which may be left to the bad guessers to argue over, serious unemployment simply did not develop.

Now most of the Government economists are predicting a setback some time between the last quarter of 1947 and the first quarter of 1950. This spread leaves much to be desired by those who like to have the future read for them, but it

bespeaks, perhaps, a becoming growth of humility among the economic seers. It should be recorded, also, that most of them are saying that this first setback, when it comes, is likely to be brief and relatively mildmore like 1920-21 than 1931-33.

As to the price outlook beyond the first of the year, the consensus is that the controlling factor will be wages. Another round of big wage increases will mean still higher prices. If it is enforced by prolonged strikes before production has come closer than it now is to demand, the inflationary effect will be aggravated.

The wiser leaders of labor know that they have already won about as much of an absolute gain in wages as can be extracted from the economy for some time to come—until new advances in productive efficiency have offset the increased wage payments already levied against so many industries. They know also that politically it would be most inadvisable to call another series of strikes in the near future. The unions narrowly escaped restrictive legislation in the spring. The next Congress almost certainly will do something about regulating union practices and industrial disputes.

Eugene Talmadge has won the nomination — equivalent to election — as Governor of Georgia.

Talmadge is a rabble rouser of the most obvious sort, who represents the most bigoted elements in the white population of his state. Intelligent Georgians point out that Talmadge did not receive a majority of the popular votes. He won through a peculiar state electoral law which is heavily weighted in favor of the rural counties and against the urban areas. Nevertheless he won. And he will succeed one of the most courageous young liberals the South has produced —Ellis Arnall—who could not enter the contest because the Georgia constitution prohibits a governor from succeeding himself.

Immediately on the heels of Talmadge’s victory came the most horrible lynching that the South has had in many years. Two young negroes and their wives were taken out and killed by a band of white men. Arnall, whose term had not yet expired, immediately ordered the state police to apprehend the offenders, and offered $12,500 in rewards for their identification. President Truman ordered the Federal Department of Justice to investigate and to take any action which it could—which is not much, since these matters fall within the jurisdiction of the local and state governments. Judging from past experience, the culprits will never be fully identified, tried and convicted.

Fortunately, Georgia seems to be the only southern state which is definitely backsliding. The Ku Klux Klan, with headquarters in that state, has been revived and is trying to spread its influence, as it did after the first world war. But it does not appear to be making much headway yet. Mississippi returned to the Senate

Theodore G. Bilbo, who is even worse than Talmadge. But Bilbo is an old Mississippi habit. In the primaries held so far in other southern states, quite a number of good men—some liberal, some conservative, some political veterans, others promising neophytes—have been chosen.

Although the presidential election is two years away, the congressional and state elections this year will show the political trend and will be watched closely also for their effect on the fortunes of the various Republican candidates for the presidential nomination. Thomas E. Dewey, Franklin D. Roosevelt’s opponent in the 1944 presidential campaign, is seeking another term as Governor of New York. Since its first appearance on the national scene in 1856, the Republican Party has never given a second chance to a defeated Republican nominee for the presidency. But its previous defeated nominees were older than Mr. Dewey, who is still in his middle forties, and none of them retained so favorable a political position as Mr. Dewey has in the governorship of New York.

If he is re-elected this year, as he probably will be, he will be a serious contender for the presidential nomination in 1948, for New York is the most populous state. And Mr. Dewey, in addition to having four more years of experience in public life, will be able to point out that even during the war he made a strong race against the most successful vote getter the Democratic Party has had since the Civil War. In 1948 the Democratic nominee will be Mr. Truman instead of “The Champ.”

Exactly because Mr. Truman looks beatable, the competition for the Republican nomination is already exceptionally keen. Governor Earl Warren, California, who rejected the offer of the vice-presidential nomination in 1944, will be a candidate for the top place in 1948. Recently he achieved the remarkable feat of winning renomination to the governorship of his state in the Democratic as well as the Republican primaries in California. He could not have done this without the help of the more conservative labor leaders and a great majority of the middle-class and farm voters.

The most powerful Republican in Congress is Senator Robert A. Taft, Ohio, son of a fomer president and former chief justice of the United States. His influence within the regular Republican state organizations is also extensive. He is perhaps the ablest of those Republicans who are willing — and even proud—to call themselves conservatives. He would attract fewer marginal voters than would most of the other important aspirants, but if the conservatives think that they can defeat Truman with a man of their own stripe in 1948, they almost certainly will nominate Taft.

The most liberal of the Republican aspirants is Harold E. Stassen, former Governor of Minnesota. He controls the organization in his own state, although he holds no office—having resigned the governorship to enter the Navy during the war. At 39 he is

five years younger than Mr. Dewey. He is a larger man physically, and friendlier in his ways than the New York Governor. His work on the American delegation at the San Francisco conference was outstanding. Many of the former supporters of the late Wendell Willkie favor Stassen. He also seems to be building a following among the veterans of the second world war.

The fifth is Senator Arthur H. Vandenberg, Michigan, chief Republican representative at San Francisco and ensuing international conferences. He is 62—but only 47 days older than Mr. Truman. His nomination would completely neutralize foreign policy as an issue. In domestic affairs he is middle of the road, often a little more flexible than his colleague, Senator Taft, but not far enough to the left to alarm the conservatives.

There is always the possibility of a deadlock which will eliminate all of the leading contenders and result in the nomination of a man who is now relatively inconspicuous. But at the present time it looks as if the next Republican presidential nominee would be one of the five mentioned above. Mr. Truman will be the Democratic nominee unless his health wavers or he decides that he has had enough of the White House. It is almost impossible to prevent a president from renominating himself. 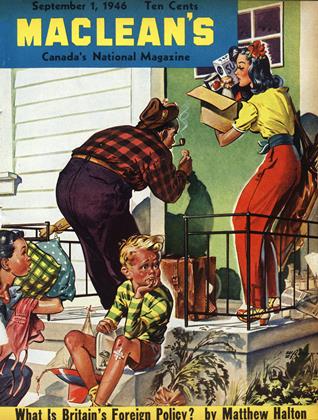