IT WAS registered and she signed for it with a hand that trembled. It was a large uninteresting brown paper envelope, headed at the top with the letters OHMS and RCAF underneath. At the bottom was the warning: “Don’t Waste

She sat down at the kitchen table and the sun of early evening touched her head as she bent over the package. Inside the envelope was a book. It was labelled Royal Canadian Air Force, and under that Pilot’s Flying Logbook.

The pilot’s name must have been written by himself at the bottom, but was undecipherable now from frequent handling. *

A few typewritten words under the Royal Canadian Air Force letterhead informed her that: “The enclosed logbook, which is part of the service estate of the above named, is passed herewith for your retention.” It was signed by a Wing Commander for Chief of the Air Staff.

The first page enumerated the pilot’s certificates of qualification such as, first pilot of Tiger Moths, Harvards, Spitfires and Lysanders. Then

followed a record of his life,day by day, from AC2 to F/O. There were the dates, names of his instructors, with the results of tests and remarks in larger columns. All very methodical. She felt now his excitement when he first wrote “Seif” under the pilot’s name. She had the same feeling as she read, “first solo.”

It went on and on, day by day, signed in red ink by chief flying instructors and chief supervisory officers, with the grand total of hours at the bottom of each page.

She remembered the letter-that told about his first flight alone. He wrote: “Up above the

clouds is another world and one is another person. I would not have been surprised to see the fairy castles of Mother Goose loom up in front of me.”

There were special entries such as, “cross country” and “50-hour check,” followed by “dual navigation,” “map reading,” and “night flying.” Then a certificate to the effect that he had completed 50 hours of combined dual, solo and elementary formations. Game the final test and she felt his pride as he pasted in the certificate which made him a pilot, having passed written examination and cockpit

tests to the satisfaction of one Wing-Commander So and So, Chief Flying Instructor. This meant graduation. Relatives did not go to graduation in 1941, she remembered. A pity. She wished she had that memory. He was so very proud of his wings.

Two blank pages followed. Not blank to her, though, but alive with a vivid picture of his embarkation leave days; the sound of laughter and young voices, the memory of his warm smile as he ran down the steps. She had waved him off as she had waved to his father in another war. She turned the page.

i^NGLAND, and the entries told of XT Miles Master and Spitfire planes alternating down the column, sometimes with an instructor, generally alone, and there was ment ion of dogfighting, aerobatics and sometimes a landing at this place or that, reason not explained. Aerobatics—she smiled. He had written: “We looped the loop, hanked this way and that, all very exciting, but when we landed I slipped behind the drome and lost my breakfast!’’ The best of them did that.

air firing at I), with a notation of “Not so hot.” End of flying at this school, commencement of training at that school and about this time “Assessment of ability as pilot: ‘Above the

There were the little notes such as: “Broken hood, landed at W.,” or more ominous ones such as, “Crash landed at W., lack of petrol,” “Hit telephone wires.” and one which landed him in hospital, “Engine failed, crash landed.” He wrote about that one. “Landed in some trees, came to a stop two fields away, with only the engine and cockpit intact, hut passenger and myself not scratched—not much. Guess 1 was horn to be strung up, Mom!”

Then (here was the strident note in red ink which said briefly: “Endorsed for disobedience after flight.” Oh-oh, alw’ays the nuisance hoy. Fie wrote about that too, rallier naively. “Had words with my flight commander. He got mad and I laughed, so I am leaving this squadron.” She had scolded him, hut he was a born rebel and it was inevitable that he should tangle now and then with authority. Perhaps it had been too much old school tie. Who would know?

But the change seemed to have pleased him. He was now on Lysanders. It was about this time that a dash through the Channel of the two Jerry warships made the headlines and she had shivered at the news over her radio which told her that “Forty of our planes are unaccounted for.” For two days the sound of the doorbell frightened her. She had worried needlessly. Bad news sends no advance agent. Later he had written: “The

Jerries were all about me through the fog and 1 was badly scared as my plane carries little armament.”

The name of one man, his air gunner, appeared regularly now. That must be Johnny. He had gone to Coventry with Johnny for leaves, after the blitz. His letters were grim about Coventry. “These people have been through hell, Mom, and somebody will pay for it.” Johnny had written her twice. Such nice letters. Perhaps she w'ould meet him some day. The world was growing smaller. They had flown consistently together for many months.

No more mention of Johnny now. He was hack to the Spitfires, working hard for the great day he mentioned so often now in his letters. Fie wrote: “The improved Spitfire is a beautiful job, but a flying arsenal, and I have a

lot more to learn about it.” He learned through page after page of calibrations, of formation-cine gun, formation local flying and formation interception. Moving from one squadron to another, and refresher courses, one after another.

She wondered about his state of mind. Was he often tired, wet and cold, discouraged and homesick? It was at this time that he joined the squadron where he spent his last year, a year, she guessed, full of the excitement of “ops.” Moments of triumph and fear. How dull life would have seemed to him if he had come home. She wondered about the lads who did come home. Were they restless and was the thought of set tling down to everyday life unbearable?

npi lli records of operations were brief, 1. as if he feared to say too much. There was “Sweep to T., no trouble at all” or “Patrol Channel, nothing seen, worse luck,” or “Nothing seen —were we mad!” And again, “Thunderbolts had all the fun.” Now and again a bit of action like: “Took a

squirt at a 109F, may have damaged it,” and a whimsical note here and there such as: “Burst a tire on take

There was a short note: “Lost Bob” and she wondered. Was Bob’s mother reading his logbook too? On and on the records went. Sweeps to this place, more sweeps to that place and little notes about them and often no notes at all as if he were too tired to comment. She was sure lie had been. The flying hours went up and up and escort duty took him to many places.

And at last the invasion, though the record seemed as laconic as before. “Invasion started—fighter cover for beachhead,” she read. “Hit by flak — just behind cockpit” and he had changed planes the next day when he noted ‘Tighters around—none seen — flak heavy.” Then the last short entries with no added notes: “Cover for

invasion—escort for Bostons—cover for convoy.” That was the last entry and the end of the month.

The first two days on the next page, days which had not been logged, his squadron had been a cover for convoy too. She knew about the third day.

It was on this and the previous page that she recognized the two signatures of the flight lieutenant and the squadron leader for they had both written her. They had said: “A great little

fighter pilot; his services to the squadron in all its activities were invaluable.”

SHF] closed the book and took it in to the living room, putting it on top of the bookcase below his picture, flanked on one side by the silver cross with its purple ribbon and on the other by his operational wings in the little blue box. She looked up at the picture, firm, stern and old for his 26 years. She replaced the book in its brown paper envelope and saw again: “Don’t Waste Words—Don’t Waste Paper,” and choked. Only lives, dear God, young gay lives, their ambitions and sweet dreams unfulfilled. Through the clamor of her jangled thoughts came the clear ringing of a bell. Prayers for peace at the little mission church across the road. Blindly she turned back in to the hall, put on her hat, her coat and her gloves, with hands that fumbled. Her steps echoed on the porch and crunched the gravel of the road.

A few children were trying to force the door, sw'ollen by the recent rains. She opened it for them and under her outstretched arm they tramped noisily in, smiling up at her as they passed.

She smiled, too. “Cover for convoy,” she thought, and followed them in. ★ 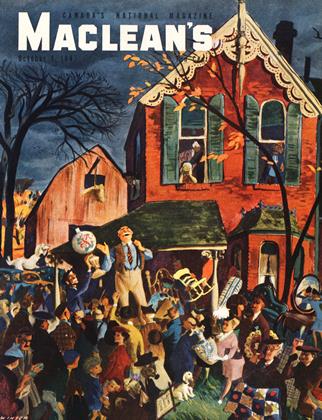