EVER SINCE he was a small boy, when he made enemies of his parents’ friends by drawing them as they played bridge, Geoffrey Davien’s main interest has been caricature in varying mediums. He has caricatured in ink, in color and in oils. His latest and most successful medium, the sculptoon, is shown in the examples on these pages.

Davien, a 32-year-old ex-RAF photographer, perfected the three dimensional caricature when he was stationed for a time in New York. In studying caricature in oils, he discovered that it was difficult to assess shades and lighting in features when they were exaggerated and he hit upon the idea of making a small model in caricature as a guide. The first model was executed in fire cement with an ink bottle for armature or core. Soon Davien began making models for their own sake and found clay the best modelling medium.

Davien’s finished caricature is a photograph of the original model which he takes himself, lighted for dramatic or humorous effect. He usually adds a slight cartoon element to the finished picture and the result is a “sculptoon.” He carries the whole process through personally,

ture to the developing and printing of his photos.

Sculptoonist Davien doesn’t believe that a sculptoon necessarily has to be comic. He feels that it can be developed into a revealing form of portraiture.

The added license allows a more vital and piercing impression of character as well as features.

Canadians will currently see a Davien dramatic sculptoon of James Mason in advertisements for the film, “The Upturned Glass.” 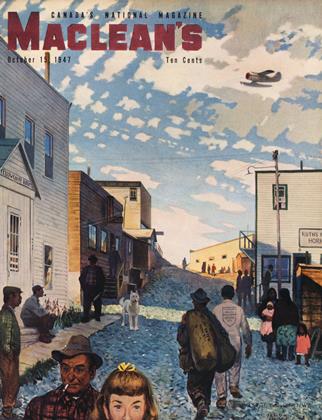