JOE MACADAM peered through the slit between the two dirty curtains. He was watching Hilda.

Hilda was crossing the street. She shambled past the butcher shop, past the police station down the block and went into the cigar store to get Joe the cigarettes.

Joe sighed in relief, then grinned broadly. It was okay. Neither Hilda, nor her mother, the landlady, suspected.

As Hilda eagerly lumbered back toward the house with the cigarettes, Joe stared at the police station with hate-filled, sneering face.

“Right across the street from you dumb flatfeet,” he said softly, with great pride. “What a hide-out.”

JOE MACADAM had figured the best hiding place was under the noses of the searchers. In the obvious place. When he’d seen the room advertised he’d grabbed it. It was a filthy hole and the rent was high, hut the landlady and her daughter were dumb, trusting. Rooms were hard to find.

Hilda came up the stairs and inside. “Here Joe,” she said gutturally, “they cost a penny less than you say.”

Joe almost forgot the act, nearly said, “what’s a cent when I’ve got . . .” He caught himself sharply.

Keep that big mouth shut, he thought, his lips tight. That’s the way they get it, with the little slips, with the boasting. I’ve got $40,000 in this room and a murder charge hanging over me.

Joe thought of the messenger he had left dead near the factory and it gave him unease enough to put the act across.

“Thanks Hilda,” he said humbly. “Every penny counts when you’re sick.”

Hilda smiled at him gravely. Joe had to restrain a laugh. He had never seen a homelier girl than Hilda. Her peroxide-blond hair was tied back in a straggly knot, her face was lumpy with thick features, her eyes were small and she was big-boned with enormous hands and feet. When she smiled, though, she wasn’t half bad. It was funny, thought Joe.

Then suddenly he remembered the joke about the guy who stopped living with the Eskimos and came back to civilization. Why? He knew it was time because the Eskimo women started looking good to him.

My God, thought Joe, a howl of mirth forming silently behind his eyes Continued on page 30

as he stared at Hilda. Don’t tell me Hilda’s getting to look good to me!

“You feeling better soon?” said Hilda hopefully. “Soon you go out and ; get a job maybe?”

“Bad to stay inside so long,” said ; Hilda, nodding. “Fresh air is good for

For a moment a chill went through Joe. If she ever shot off her mouth about the lodger who always stayed in bis room . . . Joe almost grabbed Hilda’s arm, ready to threaten her if ; she talked.

Then he saw the pity in her face. He relaxed. Relax, he muttered to himself. ! The cops will never dream a crook

would hide out across from a station house. That’s why you picked it.

“I’ll lx> all right soon,” said Joe. He smiled at Hilda, a plan forming in his mind. “Maybe you’ll take a walk with me in the park, eh?”

A dull crimson tide swept Hilda’s face. She blushed as if she were in pain. Wordlessly she nodded, then turned around and rushed out.

JOE GRINNED after her. This was working out beautifully. He needed somebody he could trust. He couldn’t work alone. Hilda could not only lx* useful, she could l>e amusing. Joe looked in disgust at the room he was in. The wallpaper was peeling, the furniture was filthy, the room was dark, the bed wasn’t fit to sleep in . . . Joe shook his head. No wonder his nerves were raw, sitting in this hole, day after day. Well it wouldn’t be much longer.

And he could make the time pass more easily with Hilda.

The next day when Hilda brought him his breakfast Joe said, “I’m feeling a little better today.” He smiled genially at her. “Getting over my sickness fast.”

Hilda clasped her huge hands together nervously, happily. “1 am glad. I can tell Mr. Thompson, he will be happy.”

“The postman. He wonders why no mail comes for your box. I tell him, you are veteran who is sick in . . .” Hilda faltered. She did not like to say sick in the head.

“Right,” said Joe, relieved. His story had been put across. “It’s all right, Hilda. You can say it. I’m not ashamed of being sick. ’Pell him I’m a psycho.” Joe repeated it two or three times so Hilda would get it . “Psycho, see.I’m very nervous from the war. Afraid to go out.”

A vast motherly pity welled up in Hilda’s pale-blue eyes. “That’s what I tell him,” she said. “He is sorry to hear it.”

Hilda started removing the breakfast dishes. Joe looked her over carefully. The longer he looked at Hilda the less impossible she seemed. Joe grinned as he thought of the Eskimo joke. He stepped over to Hilda and casually pu* an arm around her and kissed her. She uttered a delirious cry and threw her arms about him. nearly smothering him.

Hilda smiled with infinite joy. She stood before him, trembling, wordless, a vast ocean of love swelling within her.

There was a yell in the hall, Hilda’s mother.

“Come down and clean the hall,” she yelled, deep suspicion in her voice at the length of time of Hilda’s visit .

Hilda blushed and went out, throwing Joe a look of great promise. She clumped rapidly, heavily down the stairs.

Amused, Joe went to the window to take a look at the police station. His body stiffened as he saw a man walk toward the door, stop, and look up at. his window. It was the* postman, Mr. Thompson. As Joe let the curtain drop quickly, he realized with a sickness in his stomach that post offices usually have pictures of wanted criminals. Maybe . . .

JOE WAS in a sweat. He walked back and forth tensely, trying to figure angles. Even if they hadn’t identified him as he’d driven away from i the dead messenger, still there’d he a reward out. The postman might be suspicious. He was asking questions.

He liad to find a new hide-out. He knew the place, too. Behind the laundry on Eighth Street, the hidden room. He’d go down to see if it was clear, search around for a new hiding place for the money, then come hack and . . .

When he told Hilda he was going out for his first walk in six weeks, she impulsively reached out huge hands and hugged him till he gasped.

He couldn’t afford to offend her. You never knew when you need help fast.

He grabbed Hilda and kissed her.

“I’ll he hack for you, kid,” he said, lying easily. “We stick together from now on. We’ll get married.”

He left her when it got dark. He walked with his collar up, hat brim low. First to the post office. There were no pictures of him hut there was a reward for the capture of the payroll robber and murderer. Joe cursed. He made for the laundry. From a block away he saw two plain-clothes men loitering across the street. They were watching, waiting.

Frantically, Joe went back. They were on his trail. Only one thing to do. Take Hilda and elope. The elopement would be a coverup for leaving suddenly.

Joe walked into his room and looked about in a frenzy of hysteria. The windows were wide open, letting in the night air. The room was swept and cleaned. There were slipcovers on the chairs. A step behind him made him whirl to face a soft-eyed, glowing Hilda. Joe, thinking of the money lu* had hidden, pointed to the brand-new mattress on the bed and screamed.

“What did you do with the old mattress?”

“Mamma burned it,” said Hilda happily. “A present to her new son-inlaw. Everything new. forus.”

The screams and yells were heard across the street in the police station. They came running. ★ 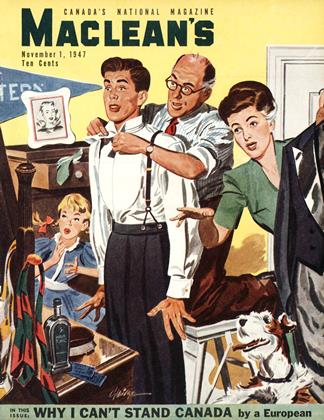