IN THE EDITORS’ CONFIDENCE The Editors November 15 1947

YOU’D have trouble believing it too if, like US, you’d just lost a close race for the elevator to the firm’s first, editor, first publisher, first advertising manager, first bookkeeper and first stockholder—but the company to which this magazine belongs is 60 years old this month.

The company, of course, is the Maclean - Hunter Publishing Company. The first editor, etc., is all one man—Lieut .-Colonel John Bayne Maclean who, at 85, can spot, the firm 25 years and still, as its chairman, do a full and lively week’s work on behalf of its 36 publications.

In the summer of 1887 young Maclean, son of a Scottish-Canadian minister, was assistant commercial editor of the Toronto Mail. Newspaper space was tight. John A. Macdonald had squeezed through a national election. Jenny Lind, first lady of the world of entertainment, had just died. The Canadian Pacific Railway, its thin line to the Pacific Coast a year old, was building grain elevators at the Lakehead.

#These were all big stories, but on his beat among the warehouses, retail stores and brokers’ offices of Toronto, Maclean was finding big stories too, and they were being crowded out of the paper. Butter had risen irresponsibly to 20 cents a pound. Bacon was nine cents a pound. Eggs were 19 cents a dozen.

He asked a couple of grocer friends. Yes, they agreed, if he could put out a publication offering up-to-date news on food prices, on marketing regulations, on new wrinkles in merchandising, he’d be doing a direct service to the trade, an indirect service to the consumer, and creating a business for himself that would have every chance of success.

Canadian Grocer was a modest success from the start. A group of hardware men saw it and asked the publisher to start a counterpart in their field. Hardware, later Hardware and Metal, was born in 1888.

That, pretty well, was the pattern for six decades of growth. During the last 44 years the other half of Maclean-Hunter, Horace T. Hunter, now president of the company, shared the task of guiding its expansion through the nation’s offices, board rooms and stores into its kitchens and living rooms. Its steady development in the specialized spheres of commerce and industry led naturally to the creation of the Canadian businessman’s bible, the Financial Post. The creation of general-circulation magazines like Maclean’s, Mayfair, Chatelaine reflected the growing conviction that Canada was ready to lead a life of its own, inspect its own society for itself, make up its own mind what the world around it looked

Maclean’s itself is a mere stripling of 36, going on 37, but when the old settlers like Canadian Grocer and Hardware and Metal start looking down their noses at us, we can always remind them that, after all, we’re third-generation stock.

#Our first direct ancestor was Business Magazine, rescued from the verge of bankruptcy by Colonel Maclean in 1905 and soon renamed Busy Man’s Magazine. Busy Man’s was the first digest magazine ever published anywhere.

From 1905 to 1911 its 200-odd pages were crammed with reprinted articles under such eminent by-lines as Thomas A. Edison, Sir Henry Campbell - Bannerman and Mark Twain, and on such burning topics of the day as the reprehensible practice of tipping; the position of the remittance man in the society of Alberta; the probable effect, if any, of the motorcar on North American civilization (“twenty-five thousand cars were produced in America in 1905; rarely do we hear the derisive expression ‘Get a horse!’ ”); the arguments for the closed shop and the open shop; the future of the

Hudson Bay Railway; and the still vaguely familiar question, “Is Mars inhabited?” There were reviews of new books by Booth Tarkington, E. Phillips Oppenheim, and of a lively novel called “The Scarlet Pimpernel” by Baroness Orczy.

Busy Man’s rolled along robustly and profitably for six years. Then it was scrapped because it wasn’t sufficiently Canadian. Magazine articles of general interest simply weren’t being written by Canadians, about Canadians, for Canadians. In March 1911, Busy Man’s Magazine became Maclean’s Magazine, no longer a digest but the clearly distinguishable prototype of the kind of magazine we’re trying to put out today. A lot of the material in the charter issue still makes good reading, but we’re bound to admit that even the first installment of Robert W. Service’s “The Trail of ’98” doesn’t fascinate us half so much today as the full-page advertisement offering a custom - made suit of clothes from Oxford Street, London, at $8.60 (carriage and duty paid).

The new magazine lost money at first. It wasn’t, in fact, until several years and several hundred thousand dollars later that its accounting department was first exposed to the exotic aroma of black ink. But it was building the kind of foundation that Colonel Maclean always insisted couldn’t be measured in terms of profit and loss—a foundation of

respect and influence. In those early days the Colonel himself was one of the magazine’s top reporters. He was a driving spirit behind Maclean’s first “editorial campaign,” a campaign to awaken Canada and the British Empire to the danger of a great European war.

Three years later the war had become a reality. The magazine gave its wholehearted support to the national war effort, but refused to forfeit the right to criticize. On one occasion, in the wake of an attack on one example of inefficiency in high places, Ottawa officials ordered the suppression of an entire issue. The order was defied, the issue was distributed, complete with the offending article—whose truth and value were swiftly substantiated.

#The first editor was Thomas B. Costain, now a world-famous novelist, who moved down the hall from one of the company’s business papers. He was followed by Vernon MacKenzie, later dean of journalism at Washington University, H. Napier Moore, now editorial director of the Maclean-Hunter Publishing Company, and in 1945 by the present editor, W. Arthur Irwin, a 22-year veteran.

Most of the people whose names are on the masthead now can speak only partly from experience and more largely from what they hear and what they read in the files. But as nearly as we can make out, it’s been a pretty good life. Not that we’d have you believe for a minute that we haven’t got our family skeletons. For instance there was an article on men’s fashions in the first issue of Maclean’s. It concluded: “A notable

departure for spring is a collar made of the same fabric as the shirt. This idea is an ultra one, not being of general adoption, and I mention it merely as a manifestation of the drift of the mode in the club and college set.” 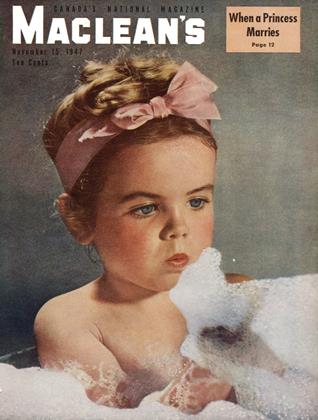