MANY commentators have been comparing the debate over the Marshall program for Europe to that over LendLease in the early months of 1941. Others find precedent in the two-year debate on the creation of an international organization to preserve pence, which culminated in the ratification by the Semate of the United Nations Charter.

The decision which Congress must now make probably is as important as those of 1941 and 1945 but it is less clear cut, or at least is less likely to he made in a clear-cut way. Mr. Roosevelt’s Dmd-lyeuse proposal could be answered “yes” or “no.” Should the United States give or lend its productive resources to aid the Allies? The question of basic policy overshadowed all details.

When the UN Charter finally came to Congress, the question was simply whether to accept or reject, an international agreement negotiated with the assistance of a bipartisan U. S. delegation, on which both parties in both houses of Congress were represented.

Fhe European recovery program, on the other hand, permits a wide range of answers.

I here are legit ¡mate differences of opinion as to the amount and form of the aid to be given, as t.0 the conditions to he attached to it, and as to the way in which it is to be administered. The responsibility for settling these differences lies in Congress. It must provide the money and determine how it is to he disbursed.

While outright opposition to (tie general idea of the program is quite small, all kinds of yes hut ’ answers are possible. It is easy to endorse the program in principle while so circumscribing it in size or wit h condit ions as to prevent it from succeeding. Amid a forest of specific disagreements, it is not always easy to l>e sure who is a real friend and who a foe of the undertaking.

would be a waste because it would offer no prospect of a cure. It wants enough money to make possible the permanent economic recovery of Western Europe. But who can say definitely how much that should be? Admittedly, the estimates made at the Paris conference were tentative, even for the first year, and became even more uncertain guesses for ensuing years. In any event Congress ordinarily makes appropriations for only one year ahead and certainly will not depart from that practice in this case.

Businesslike administration of the funds is being emphasized by a number of Republicans. By this some of them mean actual management of the operation by businessmen or financiers, which might be done by creating a government corporation, chartered so as to give its officers and directors almost complete autonomy.

But such an arrangement would not be acceptable to the Administration, more particularly to President Truman and Secretary of State Marshall. An independent corporation or bank could, in effect, write its own foreign policy. It could make demands upon a European recipient which, however defensible in the eyes of orthodox financiers, would precipitate an internal political crisis or cause serious international friction. On the other hand the President, and State Department realize that the administrative agency must have a great deal of freedom in its day-to-day operations and that there are advantages in having it set up so that it will not directly embroil the State Department every time it finds reason for calling a recipient government to account.

The prevailing view in the executive branch is that the program should be managed by a single administrator appointed by the President with Senate approval. His position would be comparable to that of head of the War Production Board during the war. No cabinet officer would be his boss, but. if he did not work in co-operation with the Secretary of State he could be removed.

Preliminary efforts to win agreement on an administrative framework have been chiefly in the hands of former Senator Robert M. LaFollette of Wisconsin. He was the general public’s

representative on the Harriman Committee—19 prominent civilians appointed to determine how much foreign aid the United States could make available—and Mr. LaFollette was made chairman of a subcommittee to study means of administering the program. The choice was most appropriate: LaFollette has long ex-

perience in Congress, is a well-known student of the machinery of government and was co-author of a 1946 law which reorganized Congressional procedures.

If a single administrator were decided on, LaFollette himself probably would be seriously considered for the appointment. While he has renounced his prewar isolationism, his approach to international problems has the hardboiled scepticism which many citizens find reassuring. Also he is a progressive who at the same time is strongly anticommunist — a combination which should enable him to deal sympathetically with the more or less socialistic regimes of Western Europe.

Senator Robert A. Taft of Ohio has now formally announced his candidacy for the Republican presidential nomination next year. There had been no real doubt concerning his intentions. He discovered nothing to dampen them in his early fall speaking tour of the west and New England. Indeed, all the indications are that he made a generally favorable impression on his audiences, which were composed chiefly of active Republican workers. The regular Republican politicians like him. He has always been regular himself and knows how to deal with men around the conference table.

One of the chief obstacles to Senator Taft’s nomination is the fear of the politicans that he lacks the necessary popular appeal. Opinion polls indicate that he would not make as good a showing as Tom Dewey, Harold E. Stassen, or several others, in a race against Mr. Truman. His personality is neither dramatic nor warming, and he is not a finished speaker, either on the platform or over the radio. Moreover, at times, he is candid to the point of being impolitic. A more serious handicap may be, however, the fact that his views on foreign policy still savor too much of isolationism to please a good many Republican as well as a good many independent voters. ★ 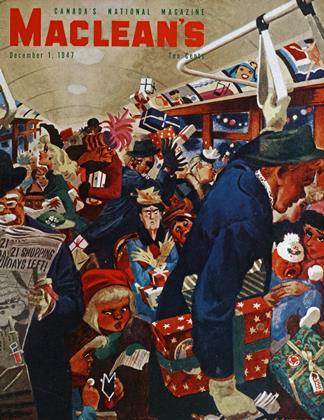