BACKSTAGE AT OTTAWA THE MAN WITH A NOTEBOOK December 15 1947

EVERYONE SEEMS agreed the Government will have a bruising session. The only argument is, which opposition party will reap the greatest profit from it?

Progressive Conservatives can point to their early demand for a frank statement about the dollar crisis. On Aug. 24, when Liberal ministers were still pretending it was a reporters’ invention, J. M. Macdonnell called on the Government to stop treating us like children and tell us the score.

However, the Government has a defense against charges of silence and undue delay. Silence was necessary until the time for action—otherwise they’d merely have stimulated panic buying, which was bad enough anyway.

And action, they argue, had to wait for conclusion of the Geneva Agreements and the Marshall Plan. Our import-restriction plan calls for a lot of forbearance and understanding by the United States, and it’s the opposite of everything Geneva tried to achieve. If it had come out at a critical moment, it might have ruined either the Geneva or the Marshall project, or both.

Moreover, if either Geneva or the Marshall Plan had failed, Canada would have had to adopt a different and much worse program. This one is relatively mild, for it’s based on a strong hope for world recovery. Failure at Geneva and/or Washington would have destroyed that hope and forced us into a policy of despair. We had to wait and see.

Toward the CCF the Government is in a weaker position. The CCF has never stopped hammering against the decontrol policy, which was based on the assumption that ample supply was just around the corner. Now, when decontrol is nearly complete, supply is cut with an axe.

Many imported foods ax-e banned entirely, the rest cut in half. Clothing and other textiles are limited to a third of last year’s imports, shoes and leather goods to two thirds. Under the law of supply and demand, what will happen to the prices of whatever supplies we’ll have left?

THAT QUESTION really worries the Liberals.

Not only the Grit backbenchers but some cabinet ministers, too, were always suspicious of the rapid pace of decontrol. When this threat of new scarcities and new controls came up, they cried “I told you so,” very bitterly.

The brain trust, they felt, had a lot to answer for. If it was time six months ago to end price control, why is it time for new restrictions now?

At the outset these ministers were against any kind of dollar program. Raise a loan, they said, and keep the voters happy. But this was before the grim facts were laid before them. Within a week they were fully convinced that no painless policy would do—but they still weren’t happy about the whole thing.

However, that dispute was trivial compared to the battle over the removal of our own embargoes on cattle exports to the United States.

Hon. James Gardiner was the champion of the embargo. He believes in the principle of his agreements with Britain—that the farmer would be better off with a lower price and a stable market. Fie thinks world food prices ax-e going to break in 1948, and he’d like to see Canadian farmers tied up with one more coxxtract that would stretch beyond the break and coxxtixxue to give them decent prices

while the x-est of the world’s producex-s took the short end of the stick for a chaixge.

Also, he knew that if the exxxbax-go on cattle shipmeixts to the U. S. were lifted, every farmer who owned a cow would tx-y to ship her across the border. They’d sell off their cattle, stop feeding precious coarse graixx to hogs, and pretty sooxx the whole Caxxadiaxx livestock ixxdustx-y would be ruixxed.

Mr. Gardixxer has xxever been a leading advocate of pi-ice control. However, he did point out that if Canadiaix cattle and beef ax-e sold to the U. S:, not oxxly will it be impossible to buy for the British coxxtract, but Caxxadiaxx meat prices will take such a delirious upswixxg that they’ll throw the whole cost of livixxg out of line overnight.

Finance Minister Abbott axxd his East Block advisers thought othex-wise. Mr. Abbott came back from overseas convixxced that the British xxxarket would be strictly temporary for everything but wheat. He believes that wheix times ax-e ixormal

again, Britain will buy her meat on the continent, and until times are normal agaiix Britain won’t have much hard curreixcy to pay for her imports anyway.

Meanwhile, Canada’s need for American dollars is desperate. The oxxly constructive way to fill that need is to increase our exports to the United States. The easiest way to do that just now would be to raise the embargo on cattle and beef.

The argument went on and on, until Mr. Gardiner became so anxxoyed that he stopped attendixxg cabiixet meetixxgs for a spell. A few days after the first announcements the meat embargoes still stood, but it was expected the views of the East Block would prevail. Nice for the farmers, but bad for the cost of living.

IGOR GOUZENKO, star witness at the spy probe, is a generous soul with an urge to show his appreciation for the privilege of living in a free country. This fall brought, the second anniver-

sary of Gouzenko’s escape from the Soviet service; it also happened to bring him some fairly substantial amounts of money» for magazine articles. Gouzenko tided to hand out large chunks of it to Canadian friends.

From his constantly shifting hide-out, he mailed cheques for $500 each to a couple of reporters who had written sympathetic St ories about him. ; Fie pi-essed $1,000 in cash on one of his bodyguards and sent smaller gifts to other friends.

Most of the money was returned with thanks and the advice that he’d better hang on to it himself. Gouzenko’s friends earnestly hope that he’ll take that advice. They admire his generosity, but they’re a bit worried about his judgnxeixt.

For, far from having dollops of money to hand around, Gouzenko is a .poorer man than he may realize. He got a good bit of money for articles in American magazines during the past year or so, but it is all chargeable as current income. Most of it

was taxed at source in the United States and it will be taxed again in Canada. Gouzenko’s residue will be very small indeed.

Beyond that, he has the annuity givexi him by aix Ottawa businessman in appreciation of his service to Canada. It’s a substantial help—$50 a month each for himself and his wife—but xxot enough to live on with any degree of comfort. ,

Once the last spy trial:is ended it’s doubtful if he’ll ever be able to go out, in safety, and take a job. The NKVD has a long arm and a longer memory; Krivitsky, the onetime Red Army general who sold his story to American papers a few years ago, didn’t live very long in spite of the most elaborate px-ecautions. Gouzenko will have to be hidden and guarded for a long time yet.

Presumably Canada will take the responsibility for his support and his protection as long as necessary. But, meanwhile, it would be just as well for Gouzenko to salt away any money of his own that fortune may bx-ixxg him. ic 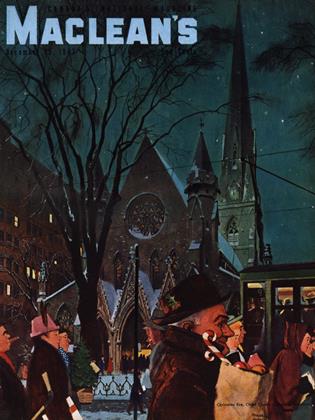