LANCE CORPORAL John Brown peered warily through the shattered window of a church tower across the rolling Norman landscape. In the middle distance a pink-orange flame blinked at the muzzle of a German 88-millimetre gun.

Seconds later there was a rending crash and the world fell on John Brown.

Stretcher-bearers found him with a compound fracture of the right leg, sick with shock and pain, cringing in fright, as shells burst in the ruined village. They strapped him to the stretcher, lowered him down the steep stairs of the tower and began to carry him back.

More shells came over and the bearers dumped the wounded man in a ditch and dived across him to shield his body.

For two years fear was John Brown’s constant companion. His had become a psychosomat ic case. His was a problem his country had to solve.

John Brown is representative of hundreds of other men, and a few women, whose war service and subsequent emotional blows incapacitated them, temporarily, for normal, happy life. A fine fight is being fought to give them the courage and balance they need for happiness and usefulness in spite of the odds against them.

neuropsychiatrist for theDVA, has estimated 5,000 admissions in 1946, with the qualification that the same patients may be admitted several times. He believes there would be 25,000 consultat ions by out-patients with the Department’s psychiatrists: one man may pay a specialist four or five visits.

JOHN BROWN’S illness was not of a type which made him dangerous to himself or to others. He was assigned to a comfortable bed in a room with three other men who lay reading, sleeping or staring at the soundproofed ceiling. Around him, on three floors, wrere 150 other men, one or two women in a special ward, awaiting cures of neurosis or psychosis — illnesses, respectively of the nervous system and of the brain.

For the most extreme cases seclusion rooms have replaced the old locked wards that often depressed the patients. Continued on p ine 49

insecurity and “there was a tendency to

slip into the superficial and facile whenever possible, thus expending a minimum of concentrated effort.”

Lastly, there was the Rorschach Test. Ten cards, this time, with queer indeterminate blotches of pastel color on them. A patient with fear in his heart sees demoniac faces in every card.

A normal man might see weird butterflies, animals, or just symmetrical ink splashes. But the Rorschach test probed deeper into Brown’s mind than either the Minnesota or the T. A. T.

The psychologist reported, “There is an acute lack of drive as the man’s responses are of the blankest and most obvious kind, certainly not indicative of his intelligence level. There is some guilt in sex matters.”

All of the information concerning Brown was correlated by the doctorpsychiatrist assigned to his case, by t the nurse, the psychologist who had examined him, by the social investigators. It was all presented at a conference directed by Dr. Bob Arthur, in charge of the ward in which Brown was under treatment.

Social implications of the man’s history made little impression on the group, save in so far as they related to Brown’s future program. The conference had heard much the same thing before; 40% of the men at Sunnybrook become patients because of family dissonance; reactions range from mild alcoholism to attempted suicide.

Chief aim of the conference was to promote the teamwork of doctor, nurse, psychologist, therapist and social worker which is essential.

Physically, there was little more that could be done for Brown. Spiritually, he would need the support of the Department of Veterans’ Affairs until —and even after—he was re-established in a home and a job.

Insulin treatment had improved his weight, his appetite, but, as the doctor observed, he had not overcome his most deep-rooted fears. He had been engaged in several sorts of remedial training: carpentry, pottery, weaving.

These occupations kept his hands busy, made him feel he was engaged in some primarily useful occupation. He had taken such physical training and physiotherapy as he could perform without straining his wounded leg.

The most successful therapy, in John Brown’s case, was accomplished with words. The psychiatrist argued long and patiently until Brown began to accept the fact he had to face his situation and master it.

He was advised to separate at least for a time from his wife, if his religious scruples would not permit him to divorce her. A department counsellor asked him what he wanted to do when he left hospital. He wanted a clerical job, the company of the men with whom he had served overseas.

Slowly, under the insistent but understanding coaching of the psychiatrist and the counsellor, he began to see life was not over for him. He was intelligent, he had the support of a 35% pension for his wound, and he was ypung.

Because he still loved his wife, it was made plain that, should he wish it, he would be assisted to effect a reconciliation with her when he had reestablished himself. The casualty retraining officer made an assessment of Brown’s ability, and found him a minor but interesting job in the town from which most of his regiment came.

Finally, he made the plunge. He was met by a few of the men who had served beside him in Normandy, placed in a quiet boarding house, acquainted with his new job, and given to under-

stand that the rest was up to him— with the comforting assurance he would have support and aid if he needed them.

The case history of John Brown, who was a good lance corporal but not an outstanding citizen, was neither entirely typical nor unique among the cases treated in Sunnybrook and other DVA hospitals.

In one particular, his history was typical: his breakdown was the result of family difficulties, in his case the infidelity of his wife. Other men have been sent to Sunnybrook by the interference of in-laws in their family life, by discord in their parental families.

There were other patients who could not, when they were first admitted to the hospital, begin the battle for themselves. They had to undergo, these psychotics, electric or insulin shock. John Smith, for instance, was a man of 49 who had fought in the First World War. When he came to the climacteric, ■ the change from maturity to the first years of old age, he suffered melancholia. He sank into bottomless depression and a sense of guilt that was ridiculous to everyone but himself.

Smith was given electric shock treatment. He had treatments over a period of five weeks, during which he received 10 shocks of from 150 to 170 volts, lasting a tenth of a second. Each shock rendered him unconscious. He had convulsions similar to the grand mal of epilepsy.

From the convulsions he passed into deep sleep, awoke a quarter or half hour later almost normal. After a few hours, he slipped back into his depression, but not so deeply; each shock was a step up the ladder to recovery. He left the hospital, cheerful, aware of the ailment that had led him to try and take his own life.

Less fortunate of the Sunnybrook patients are the schizophrenic paranoids. These men have split personalities: schizophrenia. They think they

are people of tremendous importance with the world against them: paranoia.

Many of these can he helped, hut for others there is little hope. The more serious are transferred to Westminster Hospital at London for long and arduous courses of treatment. One or two may never be able to go back to everyday life. But they are not forgotten.

If hard-worked and hard-working psychiatrists can cure them, they will be cured and made free again.

When John Brown and Joe Doakes and Jean le Blanc signed their attestation papers, contracting to obey military law and their superior officers, nothing appeared in the contract to guarantee them succor and support if the war broke them. The obligation was tacitly implied, a moral commitment.

The obligation is being met more fully than ever before, not merely in bricks and money and medicine, but in the more subtle therapy of understanding aid and sympathetic treatment. ★ 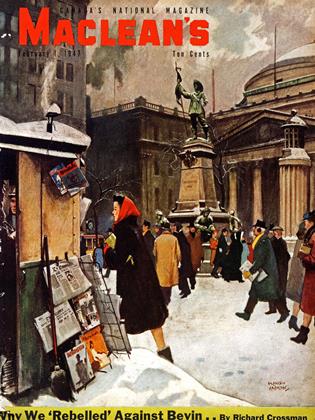